To capitalize on apprenticeship's massive potential and its renewed public appeal, policymakers must make it a part of—not an "alternative" to—higher education. 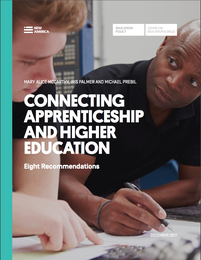 In 2014, President Obama issued a national call to double the number of American apprentices within five years. Recently, the Trump administration has also prioritized apprenticeship expansion as a key priority. In a time of intense partisan polarization, apprenticeship has managed to maintain broad appeal. According to a recent New America survey, 88 percent of Americans view apprenticeship favorably. 83 percent feel it should be better funded.

Apprenticeship's appeal isn't hard to understand. It equips individuals with valuable knowledge, skills, and work experience, without saddling them with the tremendous debt many Americans now face in the market for conventional higher education. But this hasn't made it any easier to expand: since the 2014 challenge, the number of current American apprentices has only risen by 100,000, to a total of just over 500,000 nationally – a tiny population compared to the 17 million students currently enrolled in college. Some of the fastest growing sectors of the American economy, such as IT and healthcare, have only a few thousand apprentices each.

So why aren't there more apprenticeship programs popping up for nurses, medical technicians, teachers, engineers, or cybersecurity specialists? Countries like Germany, Switzerland, Australia, and the United Kingdom all use the approach to educate workers in these sectors. But in the United States, we depend almost entirely on our higher education system to prepare students for such careers. And at least outside of the skilled trades, career advancement in the US increasingly requires an associate's or bachelor's degree, anyway. Apprenticeship is struggling in the US because it cannot deliver the credentials – college degrees – that are required for advancing most careers.

To make apprenticeships more viable and more widely available for students, we'll need to connect them to our higher education system, letting students be apprentices and college students at the same time. This has already happened in other countries with more extensive apprenticeship systems, and there's no reason that American policymakers shouldn't follow suit. In this policy paper, produced with support from JPMorgan Chase & Co., Mary Alice McCarthy, Iris Palmer, and Michael Prebil lay out a set of eight recommendations for reforming our national apprenticeship and higher education systems to provide the foundation for a significant expansion of American apprenticeship.

The recommendations include strategies for designing and delivering "degree apprenticeships" and for facilitating greater participation by colleges and universities in our national apprenticeship system.

On December 6th, 2017, New America will host a launch event for this policy paper, featuring two panel discussions on policy and program design considerations relevant to Degree Apprenticeships. If you can't make the event, you can view the livestream or recording on the event page.