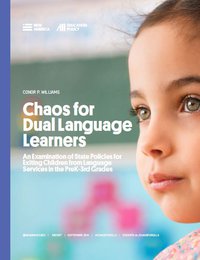 Recent data suggest that American schools are more linguistically diverse now than ever before: In 2011, nearly 22 percent of American PreK–12 students spoke a language other than English at home; in 2013, one in three Head Start participants was classified as a “dual language learner” (DLL). Despite these sizeable demographic shifts, few states have designed coherent policies to serve DLLs well. New America senior researcher Conor P. Williams recently conducted a scan of policies in all 50 states and DC to find out how states determined when to “exit” dual-language learners from services to help them learn English. His findings? Chaos. Policies vary widely by state, and almost none follow the latest science on how young children learn a second language.

Williams recommends changes at the federal, state, and local level to better support these students. His research also shows that federal funding has dropped while numbers of children in non-English households continues to grow. Today those children number more than 12 million.

The report focuses on the considerable interstate divergence in dual language learners’ “reclassification” policies. These are the rules states use for determining when a DLL no longer needs formal language support services. These rules also determine which students will receive which content instruction, in-class assistance, and assessment accommodations.

Research suggests that young DLLs (generally students 8 years old or younger) are still developing in their home language even as they begin the process of learning English — a challenge that is critically different than the process followed by older language learning students. Unfortunately, few states’ reclassification policies are tailored to suit young DLLs’ linguistic and academic needs.

States’ policies vary widely in terms of the assessments they use to gauge DLLs’ English proficiency, the benchmarks they use to define what counts as proficient, and the data they incorporate in the reclassification decision making process. This policy diversity has a number of challenging consequences:

The report features a 50-state scan capturing the wide variety in states’ reclassification policies, a discussion of the current state of research on DLLs’ linguistic and academic development, and a set of recommendations for improving the policies that govern DLLs’ education in the United States.