Beyond the Skills Gap 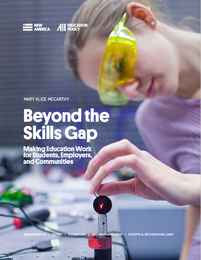 In survey after survey over the last decade employers have complained of the difficulty finding workers with the right mix of skills. As a result, even while employment opportunities seem to abound – in July 2014, there were nearly five million job openings in the United States, the most since early 2001 – underemployment is at record levels and graduates are struggling to find good jobs. In the months leading up to November’s midterm elections, ‘closing the skills gap’ has become a major political issue, with candidates across the country frequently citing the findings of a 2011 GAO study, which identified 47 distinct federal employment and training programs spread across nine federal agencies, as evidence of largely uncoordinated and ineffective federal policymaking.

But the real relationship between federal policy and the skills gap is largely misunderstood, and policymakers should focus their attention on addressing the policy gaps buried in the Higher Education Act, according to a new report, Beyond the Skills Gap: Making Education Work for Students, Employers, and Communities, authored by New America senior policy analyst Mary Alice McCarthy.

“One of the best kept secrets about the Higher Education Act (HEA) is that it doubles as the country’s largest job training program, helping students become welders, firefighters, medical assistants, and book-keepers,” says McCarthy. “HEA provides the lion’s share of funding for postsecondary career education, and the policy gaps buried within it are a major reason we continue to face a serious skills mismatch in the economy.”

In the paper McCarthy identifies five ‘gaps’ in HEA that make it too easy for institutions to provide high-cost, low-quality career education programs while also making it too difficult for institutions to build the partnerships and programs that will facilitate student transitions to jobs and careers.

“The policy gaps in HEA that are driving poor outcomes for career education students can be found in the rules and regulations guarding access to the $150 billion federal student aid programs, particularly the accreditation system and aid eligibility requirements,” explains McCarthy.

They include the excessive focus on institutional and internal indicators of quality, the lack of attention on student employment outcomes, and aid eligibility requirements that make it difficult to meet the needs of many adult learners for targeted skills development opportunities.

The paper calls for a reframing of the Higher Education Act to support all forms of postsecondary learning, including students on non-degree paths and those seeking specific skills and credentials. Recommended reforms include strengthening the role of programmatic accreditors as gatekeepers to financial aid, removing barriers to better data collection on student outcomes, and expanding eligibility for financial aid to a broader range of students and activities, including competency-based education and short-term training.