Teacher training and quality has long been a topic of discussion among policymakers, especially as states have expanded access to alternative teacher training programs outside of traditional schools of education. While many remain skeptical about the effectiveness and worth of such programs, 45 states have implemented alternative routes to certification and 11 percent of teacher trainees attend such programs. The issue was no doubt important enough that in 2008 Congress required that the U.S. Department of Education collect and report data on participation in various types of teacher training programs. The Department made that data available late last year through a report called “Preparing and Credentialing the Nation’s Teachers: The Secretary’s Eighth Report on Teacher Quality Based on Data Provided for 2008, 2009, 2010.”

The report includes a host of interesting data on teacher training, participation in various programs, and state policies on teacher credentialing. But one table particularly stuck out to us. The table (see page 14 of the document), which focuses on enrollment in various types of teacher programs by demographics in 2008-09, divides teacher training programs into three groups: traditional, alternative-based in an institution of higher education, and alternative-not based in an institution of higher education. 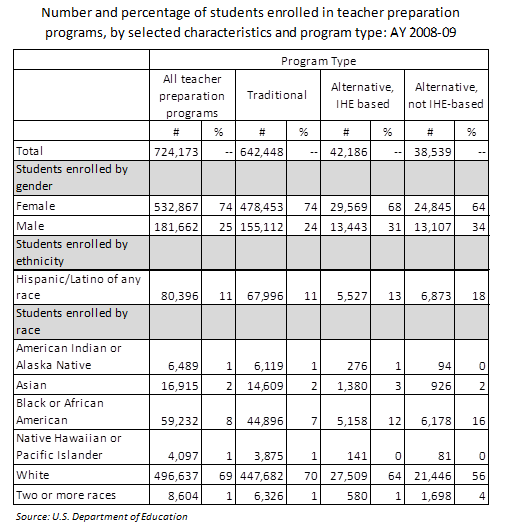 Why does this matter? Many experts believe that male and minority students are more likely to respond to and make connections with teachers that come from similar backgrounds as they do, improving their academic performance and motivation. But public schools in America have long struggled to attract more male and minority teachers into classrooms for a variety of reasons including prospective compensation, access to training programs, and perceived stigma around teaching.

The Department of Education’s latest report on teach training suggests that alternative training programs have made headway in attracting male and minority teachers when traditional training programs have not. There are many reasons why alternative programs could be more appealing to these prospective teachers: they are often more accessible, provide more flexibility, make it easier for second-career teachers to change jobs, and allow students to get on-the-job experience while in school. But which of these aspects matters the most to these high-need teachers? That’s a question worthy of some more research.

Similarly, we wonder whether alternative programs are doing something more or different to attract these teachers. Can traditional programs replicate this success and bring more male and minority teachers into classrooms? After all, traditional programs still make up the bulk of teacher training and likely will in the future -- only 11 percent of prospective teachers are currently enrolled in alternative training programs.

The federal government provides several funding streams aimed at improving teacher training in both traditional and alternative settings. It is clear that traditional programs have some things to learn from their alternative peers, particularly with respect to attracting male and minority candidates. Perhaps these funds can be used to facilitate this knowledge sharing. Hopefully as the Department of Education continues to release more data and information on these issues through the reporting requirement on alternative training programs, we will be able to answer these questions and many more.