In one Los Angeles neighborhood, a model of holistic care run by a health system serves children by supporting adults and stabilizing the community. Schools should pay attention. 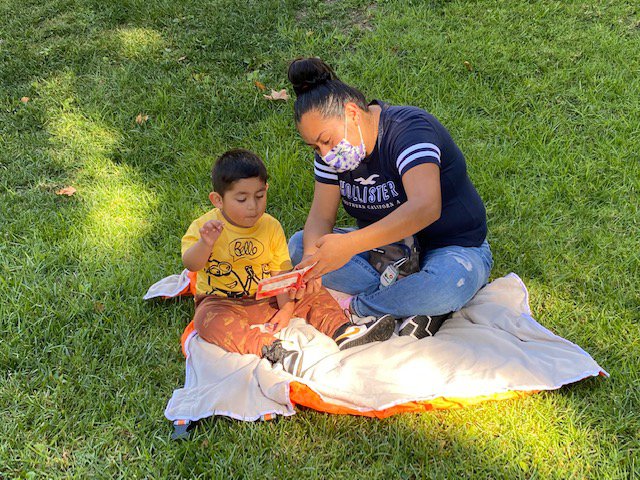 For parents raising children in the immigrant neighborhoods of downtown Los Angeles, getting their families through the early days of the coronavirus pandemic required hustle. When shopping districts closed, parents who usually worked the vendor carts sold masks on street corners. Families living together in one bedroom logged children into school on cell phones. And when shelves emptied of food and diapers, parents called Hope Street.

Vickie Kropenske, who runs Hope Street Margolis Family Center, a program of Dignity Health–California Hospital Medical Center, said that when COVID-19 first hit, the center’s teachers and case workers heard almost immediately from families who were sick and did not have enough to eat.

Hope Street has been in the neighborhood since the 1990s, providing early care and education for young children and a host of wraparound support services for families. But relationships are at the heart of what they do and have done in this community for almost 30 years.“It is through trusting relationships that change happens,” Kropenske said. And those relationships were what families leaned on to survive the pandemic.

In the spring of 2020, Kropenske and her team went to work delivering food, diapers, and critical supplies like masks and bleach to families. They provided education on basic infection control. Their pandemic response since then has included reopening their child development centers, turning their youth center into a full-day virtual school, and running a successful vaccine drive. This fall, Kropenske’s teachers and case managers are helping families make the transition back to in-person school—helping them register for required COVID testing and advising on how to advocate for their children’s needs inside of Los Angeles Unified's large system of elementary schools, such as for special education services.

Hope Street is designed as a kind of community hub. Its ecological model is built on the idea that the health and wellbeing of community adults affects children’s development. They believe that by strengthening parents’ ability to care for themselves and nurture their children, they can stabilize a whole community.

And they have seen this succeed over time. More than a few of their staff are community members who themselves attended Hope Street’s early learning programs and went on to become professionals. A social worker who was born into Hope Street’s Early Head Start program, for example, earned her master’s degree in social work and now works at Hope Street serving high-risk homeless families.

Hope Street initially began as a partnership between Dignity Health–California Hospital Medical Center and the University of California Los Angeles. It was a demonstration site for the federal Comprehensive Child Development Program that eventually became Early Head Start. Today, the center provides educational, early childhood, social, and health care services to local families, many of whom have come to Los Angeles fleeing violence in Central America.

Hope Street’s umbrella of services are all delivered through a primary case manager who develops close relationships with families over time. This relationship enables parents to open up and share their stories, staff at Hope Street say, which often involve intergenerational cycles of trauma and abuse. Investing in children and families’ lives early, Hope Street believes, can change the health and trajectory of the whole community and in turn, make the community a healthier place to grow up. Decades of research on the social determinants of health and the effects of a neighborhood on children and families’ lives back this up.

“Parents come here often without extended family and without community,” Kropenske said. “We work to build those relationships and to support parents in finding those community resources.” These often include job training, housing support, mental health care, and ESL classes, which the center offers at the same time as early literacy classes for young children.

Hope Street is filling a role that, in another time and place might have been filled by the local elementary school or church. But in Los Angeles, like many places in California in 2021, years of disinvestment are making it very challenging for schools to be those community anchors that can support immigrant families. Most simply do not have the infrastructure that they need to do this work. This is becoming more evident as children return to in-person school after so much time away and teachers are recognizing how much children and families’ needs have ballooned.

Districts across the country are reporting widespread regression, malnourishment, and trauma in their youngest children who have been without school and developmental support services during the pandemic.

In Los Angeles Unified, elementary schools may not even have a dedicated nurse or librarian or a school social worker. They also may not have enough administrative staff in the front office to greet families, answer questions, translate into multiple languages, or to build trusting relationships with families. And even now as new money comes in, the school district has been struggling to fill new support positions.

“Teachers are not prepared to meet the emotional health needs of children, let alone of their parents. The need is so great,” said Sherrie Segovia, who is the clinical manager and mental health coordinator at Hope Street. Even with all these promised extra resources, Segovia said this work is a very complex thing to ask schools to do.

The staff at Hope Street have worked to build partnerships with their local elementary schools, but because of high turnover at schools, it is often challenging.

Yet partnership, Segovia and other experts argue, is critical to support children. Work at New America and elsewhere shows that meaningful communications between early education programs and elementary schools can help strengthen children’s transition into kindergarten and help them be successful once they get there. Advocates in California have been pointing to full-service school models as a way forward—where services like the ones Hope Street provides are more integrated into the fabric of how a school serves neighborhood children and their families.

Juan Ledezma, the family literacy manager at Hope Street, said more than a quarter of the children in their programs have special needs that require additional intervention services.

Families often need support to access these services because of stigma or language barriers or because parents may be intimidated by teachers and be reluctant to ask for help. The pandemic created additional barriers and many children and families missed out on services for months.

Ledezma described one young child on the autism spectrum who had been in their early childhood programs before the pandemic and was now struggling with the transition into kindergarten. Prior to COVID-19, Hope Street teachers and home visitors had worked closely with the child’s mother to offer suggestions for home routines consistent with what teachers were doing in the classroom. And they saw real progress. But now, after having been home for so long, the child’s challenging behaviors have returned, and the elementary school is not able to offer anywhere close to the same level of support.

“The role that we play is very much the role that historically schools have played in communities, but no longer do,” said Vickie Kropenske, Hope Street’s Executive Director. “Schools and churches, religious agencies had this foundational role. They were the scaffolding for families and for family life and where you would go for support and that kind of continuity. We’ve lost that in many communities, particularly in urban communities.”

A coalition of education and civil rights advocates in California are calling on schools and districts to rebuild in ways that put the needs of children and families front and center. They are pushing for investments in things like new partnerships with community-based service providers and training for staff to be able to work in a more relationship-centered way.

The state’s recently passed budget included $3 billion for full-service community schools— a vision articulated by California’s State Board of Education President Linda Darling-Hammond as “hubs of a family-centered community.” Darling-Hammond wants to see public schools that have the resources to build trust with families and help communities respond to the trauma of the pandemic.

But judging from schools’ experience this fall—how great the need and how limited the existing infrastructure and human capital—even with these new dollars, California’s schools have a long way to go toward achieving that vision.