The Perpetual Debate Over Targeted vs. Universal Pre-K 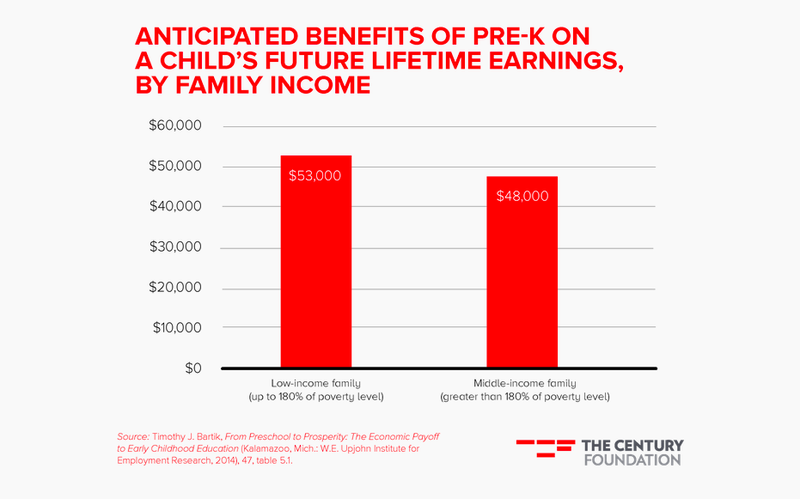 Anyone following 2016 presidential politics is probably familiar with Senator Bernie Sanders’s plan to make college free for students. While this policy is popular especially among left-leaning millennials, his primary opponent is not jumping on the free college bandwagon. Instead, Hillary Clinton recently countered that she is “not in favor of making college free for Donald Trump's kids.” Clinton’s higher education proposal focuses more on helping low-income students afford college, instead of providing it as a public good for all Americans.

This sounds very similar to a debate that has been happening in the early education world for years over targeted vs. universal pre-K. There is growing consensus that access to pre-K is important and that governments should invest more in early education. But should services be available to all children or just those who policymakers have determined need them the most? When resources are limited, is it better to provide more generous supports to a select group or modest services to all? There is less consensus around the answers to these questions. As more states and districts create and expand pre-K programs, policymakers continue to wrestle with the best way to provide it. We’ve recently seen programs unfold using both approaches--from New York City’s new universal pre-K program to Minnesota’s recent decision to fund targeted scholarships rather than universal access.

Last week, Halley Potter and Julie Kashen of The Century Foundation released a report calling on policymakers to expand access to early education programs for all families-- regardless of income level. In Together from the Start: Expanding Early Childhood Investments for Middle-Class and Low-Income Families, they explain why middle class families stand to benefit from high-quality pre-K and child care.

Pre-K is most often praised as a way to lessen the achievement gap between children of different socioeconomic backgrounds, and most research on its benefits focus on children from low-income families. However, Potter and Kashen explain that children from middle-class families “experience education and economic boosts almost as large as those seen for low-income children.” They point to Tulsa’s well-regarded universal pre-K program, where middle-income children showed significant improvement in pre-reading skills compared to children who didn’t attend pre-K. However, their gains were not as large as those made by low-income students. The authors also highlight economist Timothy Bartik’s findings on the future earnings of pre-K students, depicted in the graph below. As with the pre-reading skills, the results are stronger for lower-income students, but they are still impressive across the board.

Based on this evidence, it seems the debate shouldn’t be over whether pre-K benefits middle-class children, but instead whether the benefits are large enough to justify the cost. The Century Foundation believes they are. States and districts are rarely willing or able to fund pre-K for all children, so they prioritize those who have the most to gain-- children from low-income families. But many public programs, from the federal Head Start program to Texas’s Public School Prekindergarten program, are leaving middle-class families stranded. In fact, children from middle-income families are less likely than both their lower- and higher-income peers to be enrolled in high quality pre-K at age four. High-quality private pre-K is very expensive, making it accessible only to high-income families, while the vast majority of public programs target low-income families. Middle class families are left with limited options.

Better access to pre-K, and early education in general, would help both middle-class children and their parents. The Century Foundation points to universal pre-K programs and more generous child care subsidies as two potential areas for reform. The Obama administration has been calling for similar reforms to child care policies this year, since the subsidies help parents access better early care and education options and serve as a work support.

When resources are limited-- and they too often are-- it makes sense to prioritize children who are at the highest risk for starting kindergarten behind. The goal, though, should be universal access. But right now even our federal programs that target low-income families, like Head Start and the Child Care Development Block Grant, aren’t funded at a level to reach all eligible families, let alone middle-class families.It’s time to rethink public investment in early care and education for all families. There are many options on the table, including supporting paid parental leave, expanding tax credits, increasing taxes to provide pre-K for all low- and moderate-income families, and expanding subsidies to serve all families who qualify and provide them with high-quality options. What all of these options have in common is that they will require greater investment if they are to serve all families in need. "