The Supreme Court Takes on LGBTQ Employment: What Does This Mean for Queer and Trans Educators? 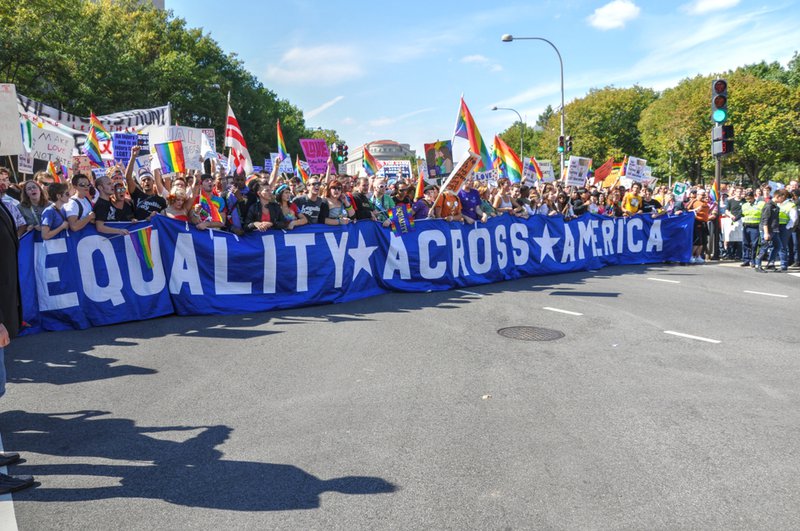 This week, the U.S. Supreme Court heard three landmark cases regarding employment discrimination involving lesbian, gay, bisexual, transgender and queer (LGBTQ) workers. These cases center a long-standing point of contention in Title VII of the Civil Rights Act of 1964, which protects against employment discrimination on the basis of sex but not gender. Originally designed to protect cisgender (non-transgender) women against workplace discrimination, this specific language does not protect queer and transgender employees from being fired because of their gender or sexual identity. With 28 states still allowing employers to fire someone for being gay, three cases to decide the next major set of LGBTQ rights, and one deeply divided high court, a lot is at stake.

As thousands of advocates swarmed the Supreme Court building on Tuesday morning, many signs in the crowd called out the unique challenges that teachers face in seeking workplace protections. While many queer and trans employees must constantly negotiate if, when, how, and to whom it’s safe to come out at work, teachers face scrutiny from more than just their employers. Queer and trans educators must not only gain acceptance from their employer—the school—but also from students, families, and the broader community. Each of these groups represents an opportunity for backlash that teachers must confront when deciding how much of their own lives and experiences they’ll bring into the classroom. While some may be quite comfortable doing so, many others across the country choose not to be fully themselves at school for fear of losing their jobs or being treated differently.

Six states still prohibit teachers from even mentioning LGBTQ identities, with laws notoriously known as “No Promo Homo” laws. Many more around the country protect teachers to varying degrees depending on the particular language in state law and district policies, as well as personal beliefs of the school administration and leadership. On top of this, many teachers who are protected by state-level laws still struggle to gain acceptance and support at school when their peers and principals don’t fully understand the challenges they face or the best ways to support them.

When we talk about LGBTQ-inclusive teaching and learning, we’re often talking about helping straight, cisgender teachers better engage queer and trans students. Queer educators, while usually leading the charge on inclusive educational practices, are often left out of focus. Not only do queer and trans educators have to gain acceptance from multiple groups, but they are often then forced to become the expert on all things LGBTQ at their school. This puts them in the position of both representing an entire population of people and being an expert on all issues related to that population. The more this happens, the more likely non-LGBTQ teachers and principals are to think all LGBTQ folks are exactly like the one queer teacher in their school. This only works to create greater misunderstanding of LGBTQ people and identities.

Like with students, the focus on protecting queer and trans teachers, where it does exist, often starts and stops with basic safety. Queer teachers—like all employees—need the basic safety and security that come from legal protections in order to perform their jobs well. But their needs don’t stop there. It’s critical for principals and non-LGBTQ teachers to understand how to support queer and trans educators and how to recognize them as experts of their own experiences without making them spokespeople for an entire community. Currently, there is little mention, even in states with inclusive education and employment laws, of actively supporting LGBTQ teachers in these ways.

Transgender teachers have perhaps the most at stake, both in schools across the country and in these rulings. Where legal protections are in many ways just beginning to recognize sexuality, they are still a long way from reflecting society’s current understanding of transgender and nonbinary identities. Nonbinary refers to people whose identities don’t fall into traditional “male” or “female” categories. In the past, Title VII of the Civil Rights Act of 1964, which protects against discrimination on the basis of sex, has unevenly and unpredictably been interpreted to cover gender minorities. In 2012, the Equal Employment Opportunity Commission released guidance that gender identity claims would be brought under Title VII and subsumed under protections for sex discrimination. And while this move did offer more protections for gender minorities, the solution itself missed the target. By lumping gender identity discrimination together under the more common phrase ‘sex discrimination,’ the state risked further cementing the conflation of the two terms in the public’s minds, which perpetuates a lack of true understanding of gender minorities—the precise reason we need these protections in the first place.

This nuance, however, fell out of focus in October of 2017 after then-Attorney General Jeff Sessions withdrew the guidance, announcing gender minorities would no longer be protected under Title VII. The announcement, while discouraging and frustrating for many, seems to have played a catalytic role in recent local efforts to secure protections. That same year, California passed Senate Bill 396, becoming the first state to formally address gender discrimination in corporate policies. Although California joined the ranks of thirty other states with workplace protections for people of gender minorities, there is still a long way to go. According to the Movement Advancement Project, 44% of the LGBTQ population in the U.S. lives in states that do not prohibit employment discrimination based on sexual orientation or gender identity (including 5% of LGBT population living in states that preempt local nondiscrimination laws). More than half of states (29) have non-comprehensive laws, which offer selective protections to some minorities but not to others. These types of laws leave open loopholes for unfair treatment, discrimination, and harassment.

By no coincidence, states that lack legal workplace protections for LGBTQ people are many of the same that forbid mention of these identities in the classroom and teach with PreK-12 curricula that never mention queer and trans people. If the Court decides not to enumerate protections, the result could be confusion, job insecurity, and hostility at work for teachers across the country. To be sure, personal bias and structural changes must also be addressed to ensure safety and inclusion for queer and trans teachers, but legal protections are a critical step. Ultimately, the Supreme Court is deliberating on whose humanity deserves to be recognized and whose doesn’t, and these rulings will affect the fate of educators for years to come.