Being a college student during coronavirus is tough. Campuses suddenly shuttered and classes moved online. Worse, they were told to pack up their things and move out of the dorm. And if that wasn’t enough, their finances likely took a hit, either because, like many Americans, they were laid off or maybe had to move back to their hometown, which meant giving up their job.

Luckily, Congress stepped up and recognized students and colleges would need some help as they confront this unique and costly situation. Lawmakers passed the CARES Act in March and allocated about $14 billion for higher education. At least half of that money was required to go directly to students in the form of emergency grant aid.

Now, a company is promising to help college students access federal coronavirus relief aid. But it’s not clear how much help they’re able to provide.

The company is called “Frank.” Its primary business is assisting students with the U.S. Department of Education’s Free Application for Federal Student Aid (FAFSA). Partnering with the textbook rental company Chegg (which invested in Frank this spring), Frank said it will help college students access CARES Act emergency grant aid money. Together, Chegg and Frank have launched a tool that allows college students to complete an “application” for the coronavirus relief money.

The problem is, unlike FAFSA, there is no single application for the CARES grants — and there may not even be much money left to get. Frank’s pitch uses an out-of-date statistic, saying that only 1% of the aid money had been spent, telling students that billions of dollars were left. But a lot has happened since April when that stat was published. One survey of financial aid offices showed that 96% of respondents had distributed some CARES Act money to students by June 12th. More than half of the responding colleges had given out between 75 percent and 100 percent of their emergency grant funds already.

That money took a little time to get to colleges and students — thanks to the Department of Education’s effort to block undocumented students from receiving the aid — but it got there nonetheless. And most of it has likely gone out the door to students already. As one financial aid officer told me, “Our CARES funding was all given out before the spring term ended, so the emails we got this past weekend that were clearly generated from the [Frank] tool were useless. The students would've been better off just contacting our office directly to discuss their options.”

The statistic may have just been a press hook, but it’s only the beginning of how this tool might confuse or mislead students. In the tool and in the press, Frank says students can apply for up to $5,000 in grants, referencing money students were “leaving on the table.” But most schools we’ve looked at are providing grants much, much smaller than that to students — often just a few hundred dollars.

Even if colleges have money left to give out, and even if they’re providing sizeable grants, it’s not clear that Frank’s tool will help students get the money at all.

When students visit Frank’s website to apply, the first step in the process they are presented with is a list of eligibility requirements for students to receive aid. They include being fired, furloughed, working fewer hours, or having an unexpected expense. Students are required to select one of those reasons for needing aid in their “application.”

But these aren’t exactly eligibility requirements — they’re factors a school might consider as it awards grants. In fact, there are only a few actual eligibility requirements. Congress excluded students who were learning exclusively online before the pandemic from these emergency grants, since the move to online instruction was less disruptive to them and, therefore, they were unlikely to face expenses like being forced out of dorms, having to fly home of the semester, having to buy a laptop or increase broadband access. But Frank’s website doesn’t mention that exclusion; nor does it ask students if they were previously online-only students before the pandemic hit.

And while the website says students should “apply” for the coronavirus aid in at least four places, the site isn’t actually an application. Instead, it collects students’ information and then sends them an email with a letter to give to their schools.

The letters students receive from Frank are just text in the body of an email, where Frank has dropped in the student’s information and selected “eligibility reason.” The tool instructs students to “Find the email address for your school’s financial aid office -- look for it on your school’s website or by calling your school directly -- and send it in! (You can copy-paste it into a new email or simply forward this email and delete this top portion).” 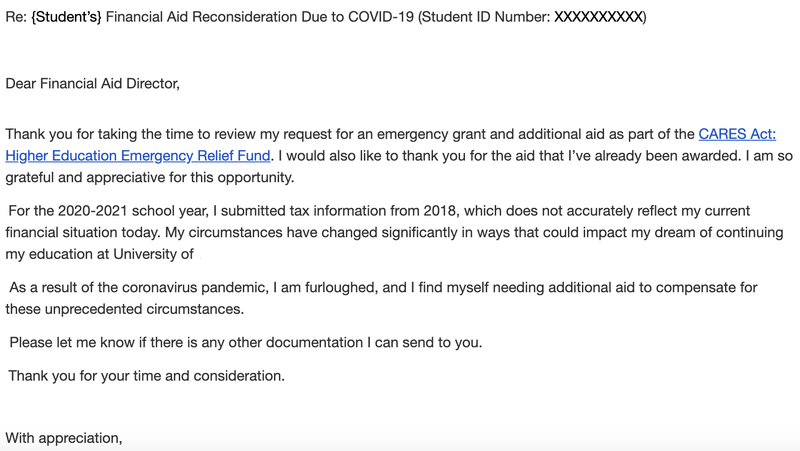 The letter that is presented as an application likely does little to help students get the emergency aid money. Part of that is because in many cases, the money is already gone. But even for the schools with money, it’s likely these form letters don’t match the actual application process of institutions because each institution can allocate their CARES money differently. For example, the University of Central Florida is one school with money still available. It saved part of its CARES money for a second round of applications but students must log in to the student portal to apply. Others didn’t even have applications, or only gave a small portion through an application process. They gave out flat amounts to students, sometimes based on their financial need according to FAFSA, other times it was a universal amount. Often, they had forms posted on their websites requiring specific information.

So students spending their time applying through Frank may find it’s not fruitful. The tool doesn’t take long to complete, but students then have to wait to receive it back from Frank—my test application took nearly 24 hours to land in my inbox. The time spent filling out a form through Frank could just be wasted time, better spent going through the school’s actual process. I spoke with Charlie Javice, Frank’s founder and CEO, to see whether the company was making the tool work, at least for some students, by partnering with institutions directly. She said they didn’t.

The harm to students might be minimal. Just some wasted time and a delay in receiving the money. But so many Americans are feeling vulnerable financially, mentally, and even physically. Giving students false hope, especially in a time of crisis like a national pandemic, will only exacerbate that.

Within just five days of the launch of this new tool, Javice said, more than 100,000 students completed the form. That shows just how desperately some students need relief. More than 100,000 new contacts to market your services to is a valuable resource, but if the company sold any of that information it could be worth much more to a company.

Frank’s CEO insisted they did not sell student data they collected. However, the company’s privacy policy says they share students’ data to “nonaffiliates to market to you.” Javice also noted that applicants would eventually receive retention marketing from Frank reminding them to file their FAFSA through the Frank service.

Reasonable people have diverging views around for-profit companies helping students complete a free financial aid application. But setting that debate aside, if a company is going to offer a product and collect data to market that service to students, the product itself should be helpful to students and accurately presented. Otherwise, it feels like a misleading marketing tactic.

Capturing student data under the guise of helping them get pandemic relief money that’s likely been spent already is bad enough. But doing so without actually helping them—well, that’s the worst use of the “never waste a crisis” mentality.

Update: A bipartisan Congressional letter requesting the Federal Trade Commission investigate the tool was sent after publication of this piece.