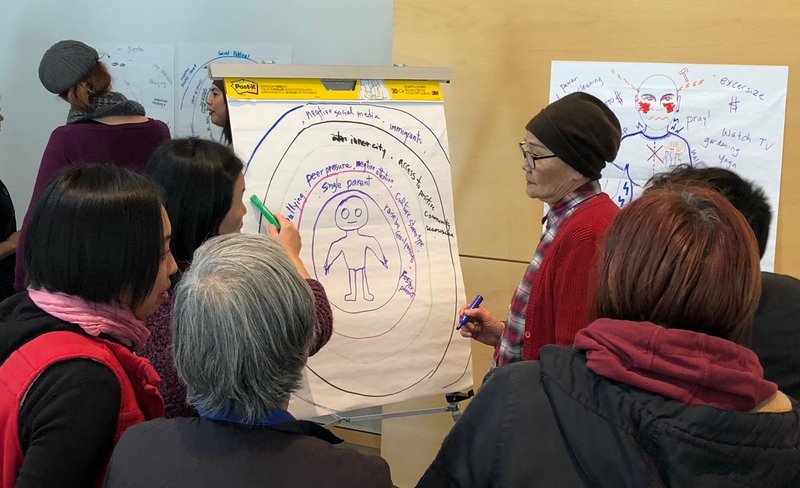 Teachers in Oakland’s child development centers have a lot on their hands. Children come to the city’s public preschool programs from a wide variety of backgrounds and experiences. Many children have never been in a child care or pre-kindergarten setting before, many come from the city’s diverse immigrant communities and may speak a language other than English at home. The region’s vast economic inequities are impacting children who live here. And more children are experiencing stressors associated with insecure housing, hunger, and exposure to violence.

Since 2015, a community-wide coalition called Oakland Starting Smart and Strong, which includes the school district, has been working to reform how early childhood systems work and how teachers are trained. The goal is to make sure teachers of young children are well prepared to set children on a course for future success. Several years ago, as part of this work, they began a pilot program in trauma-informed classroom practices for pre-K teachers. The project was a partnership between Oakland Unified and the City of Oakland Head Start, the two largest early childhood providers in the city.

Children exposed to violence, hunger, and other traumas need special attention if they are to thrive in school and heal. Trauma-informed practice trains teachers to respond to these conditions in the classroom—which often means learning new ways of coping with children who exhibit challenging classroom behavior and understanding when these behaviors may be related to traumatic experiences.

“When you’re talking about Oakland, up to 80 percent or 90 percent of children in some classrooms are affected,” said LaWanda Wesley, who runs professional development and quality enhancement in early learning for Oakland Unified School District. “Teachers need new skills to be able to support these children.”

Wesley said that children exposed to trauma can become dysregulated or withdrawn easily. “They can be easily triggered by things we think are normal, like turning on the light, turning off the light, or when someone enters the room who is unknown and unfamiliar.”

The group training sessions focus on the emotional development of children experiencing trauma, how to create a healing environment, and how to support families. The training also includes information about race, systemic oppression, implicit bias, and the importance of culturally responsive teaching practice. The sessions also build awareness in adults about their own experiences with trauma and identify self-care strategies they can use so as to better nurture the children in their care. Some participants can also participate in follow-up professional learning communities at their school sites.

“Almost every student here is dealing with trauma in some kind of way,” West said of her school. “It really gave us an opening to have a conversation about how to help each kid flourish and to see the great within the most challenging kids that we have here.”

LaWanda Wesley, who facilitated several of the training sessions worked closely with other facilitators and teachers to tailor training to the lived experience of children and teachers in Oakland. Other facilitators included authors of the book Trauma-Informed Practices for Early Childhood Educators: Relationship-Based Approaches that Support Healing and Build Resilience in Young Children.

Organizers renamed the project “Resilient Oakland Communities and Kids” and worked to impart a strength-based approach that focuses on community resilience and leaves judgment at the door.

Teachers at Arroyo Viejo, for example, chose to praise a child’s grandfather instead of shaming him. The child was often late to class and frequently arrived riding his grandfather’s bike. Even though the staff suspected the child’s tardiness was because the grandfather had been drinking, they chose to compliment the grandfather when he did get the child to school on time, with the hope that it might be an opening to improve the situation.

The secret sauce is in how the training is carried out, according to Sarah Nadiv, who was evaluating the program when she was with WestEd.

“When it’s done by someone who is caring and thoughtful and sets the tone right from the beginning, that’s really transformational.” Nadiv said that she thinks this is why the training was so successful in Oakland.

Without strategies to address trauma, Wesley said, teachers often resort to more traditional methods of disciplining children who act out, like suspension or expulsion. African American boys are expelled from pre-K programs at higher rates around the country, often because of challenging behaviors like aggression, tantrums, and not following rules. If the behavioral issues are related to trauma, programs like these may be able to help close the large disparities in kindergarten readiness between children of color and white students.

The training can also give teachers tools to rethink their approaches, as one teacher discovered. The teacher was at wit’s end with one child who threw a tantrum whenever it was time to clean up. The teacher had been trained to reinforce rules and not let a child get out of cleaning up just because he was crying. But at the suggestion of one of the facilitators she decided that she would instead just hold the child in her arms.

“And it worked,” Nadiv said. “She would hold him and then he would go clean up. The kid wanted to be held. It’s not rewarding them for bad behavior, it’s what they need. This is such a cultural shift.”