States Still Racing to the Top, But What's Next? 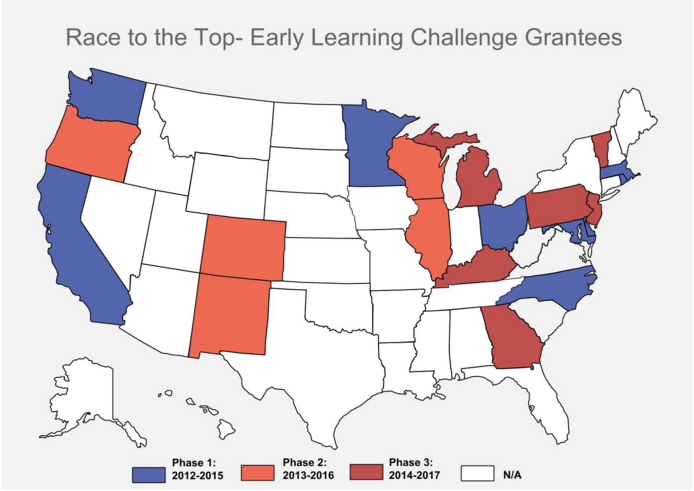 As Education Secretary Arne Duncan prepares to leave office and the 2016 presidential election inches closer, it’s time for many of the Obama administration’s signature initiatives to start wrapping up. It’s been more than four years since the administration announced the first Race to the Top- Early Learning Challenge (RTT-ELC) grant competition, and winners from the first phase are using up the last of their funds. The U.S. Departments of Education and Health and Human Services, which jointly oversee the program, recently released a brief outlining the progress of all 20 states that received RTT-ELC grants. The map below shows which states were awarded RTT-ELC grants in each phase.

Competitive grant programs like RTT-ELC have been the Obama administration’s signature way to advance its education agenda. The administration has made early education a top priority and through RTT-ELC it was able to allocate over $1 billion to accelerate state early education initiatives for young children from disadvantaged backgrounds. Individual grants ranged from $30 million to $70 million.

RTT-ELC focuses largely on children from birth to age five, but increased its focus on children up to third grade in the last phase of the competition. Grantees are expected to grow, improve, and better coordinate their early learning programs and can choose from a variety of focus areas based on their needs. The brief shows that states are making progress in a host of important areas. For instance, almost all states used RTT-ELC funds to update their early learning and development standards and align them with the later grades. While it is difficult to know how meaningful this alignment is, having appropriate standards in place is a first step to ensuring that children are learning what they need to be ready for kindergarten.

About half of RTT-ELC states are also using funds to create comprehensive assessment systems in the early years, which can include everything from developmental screenings while in child care to Kindergarten Entry Assessments (KEAs). This school year, 11 of the 20 states are implementing statewide KEAs, and another eight are in the earlier development/piloting stages. (Wisconsin was the only state that chose not to create a statewide KEA.) Data gathered from these early assessments can inform instruction and can help determine whether children may benefit from additional interventions. These states and a few others are also in the process of incorporating early learning data into their State Longitudinal Data Systems to better utilize this information.

One of the primary ways that RTT-ELC states are expected to improve program quality is to create and expand the use of Quality Rating and Improvement Systems (QRIS). QRISs have two primary purposes: to accurately evaluate the quality of child care and early education programs and to increase program quality. Rating program quality can help parents decide where to send their children, can inform state funding decisions, and can help programs identify areas for improvement. While the details of each state QRIS are unique, they all rate programs based on a tiered system, such as a four-star scale, with each tier clearly representing different levels of quality.

According to the brief, there has been an 87 percent increase overall in the number of programs rated under state QRIS systems: 72,000 programs in RTT-ELC states had a quality rating as of last Spring. The number of programs with the highest rating has also increased substantially, and the data suggest that these programs are reaching high-need students (such as those from low-income families, dual-language learners, and those with developmental delays) both in public pre-K programs and CCDF-funded child care.

While most states have expanded the use of QRIS, some states are making much greater headway than others. Minnesota and Illinois appear to be leading the way-- Illinois added over 12,000 programs to its QRIS in just two years. Both states have seen a substantial increase in the number of programs in the top tier of their QRIS, signifying both that more high quality programs are joining QRIS and that lower quality programs are improving. California, Illinois, and Minnesota have all seen an impressive increase in the number of high needs students served in highly-rated QRIS pre-K programs: 37,689, 44,291, and 21,961 respectively.

The rapid expansion of QRISs after only a few years is noteworthy, as is the influx of children being served by highly rated programs. However, it remains to be seen whether these policies will have a meaningful impact on child outcomes in RTT-ELC states. The success of policies related to QRIS depends largely on whether the tool accurately measures program quality and whether higher QRIS ratings are in fact correlated with better child outcomes. There is currently limited evidence that they do. All RTT-ELC state QRISs must undergo a validation study as part of the grant requirement, none of which have been released yet.

It is clear that RTT-ELC has greatly accelerated the implementation and expansion of a handful of early education policies throughout the country. But perhaps the most important part of the brief is the very short discussion of how states are going to fare once this funding runs out. Some states still have a couple of years of funding left, but the grant period for Phase 1 grantees ends next month (although some states have applied for a one-year no cost extension to finish out their plans).

So how are states going to sustain the improvements they’ve made during their grant period? The brief notes that grantees will continue to collaborate as they have under RTT-ELC. But collaboration likely is not enough to sustain these policies. The Departments have acknowledged the importance of building sustainable systems from the beginning and have continued to provide technical assistance along the way to support states in this effort. To maintain and build upon the strides made in early education coordination and quality during the past few years state leaders must step up to secure continued investment."