Drawing from the Margins: The Role of ECE for Our Youngest Homeless Students 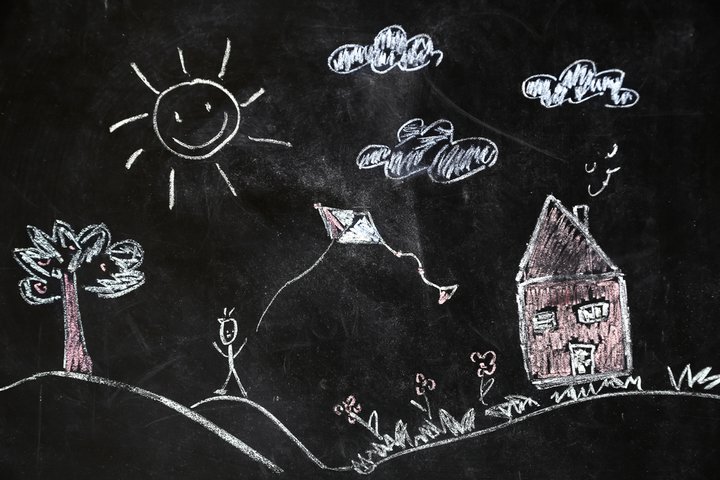 November is National Homeless Youth Awareness Month. To commemorate this month, we’re re-running a 2017 post about homelessness among America’s youngest students. Since this post was first published, homelessness among young children has only worsened. During the 2016-17 school year, 1.4 million students aged six to 18 experienced homelessness. Of all the children in federally funded shelters during the 2016-17 school year, 10 percent were younger than one-year-old and an additional 35 percent were between the ages of one and five. New data help to spotlight the persistent problem of homelessness in our country’s major public school systems: about 10 percent of students in New York City’s public schools have experienced homelessness, five percent of Chicago’s public school students were homeless in 2017, and over three percent of Los Angeles’ students were homeless in 2016. Homelessess isn’t just limited to major urban centers. A recent report from the Institute for Children, Poverty, and Homelessness finds that the highest rate of growth for student homelessness in recent years has actually been in rural America, which experienced an 11 percent increase in the number of homeless students between the 2013-14 and 2016-17 school years. The good news is that funding for the federal McKinney-Vento Education for Homeless Children and Youth program has increased by roughly 10 percent in each of the last few fiscal years, rising from about $65 million in FY2015 to $93.5 million in FY2019, an increase of over 43 percent. Future funding increases will be necessary to reduce homelessness among children in America.

Student homelessness is a growing problem in our schools, and the statistics show that it’s imperative we do more. The number of homeless students in pre-K through 12th grade increased 19 percent since the 2010-11 school year; just under 1.3 million homeless students were enrolled in public schools during the 2014-15 school year. Over the same time period, funding for the Education for Homeless Children and Youth (EHCY) program has remained at roughly $65 million, resulting in a decrease in the average per pupil rate in federal funding for additional supports needed by homeless students.

Homelessness can be a major environmental risk factor with detrimental effects on the cognitive and behavioral development of children. Homelessness can also increase a child’s vulnerability to stressors, such as substance abuse, poor nutrition, and unsafe living situations. These stressors are especially impactful on areas of the brain that control memory and verbal ability and stress-response systems.

Considering these factors, it’s not surprising that large disparities exist between the academic achievement of housed and homeless students. Three-quarters of homeless children under the age of five have at least one developmental delay, and almost half have two developmental delays. The two most common delays are related to speech and fine motor skills, both of which are important for productive learning experiences and interactions.

The consequences of homelessness can be detected in students as early as pre-K. But to do so, educators first need to know which students are homeless so they can provide necessary supports, such as mental health services. Yet, although early childhood programs can improve educational outcomes for homeless children, enrollment rates for homeless prekindergarten-age children remain disproportionately low. In 2015, only 8 percent of children experiencing homelessness were enrolled in federally-funded early childhood programs.

Accurately identifying our most vulnerable students is difficult due to a lack of common language about what homelessness is. What’s defined as “homelessness” varies by federal agency, and eligibility for programs depends on which agency is funding them. The definition used by the U.S. Department of Education (ED) includes individuals who are “doubled up,” or living temporarily with another relative or family due to economic hardship. More than 75 percent of all homeless students live in doubled up situations, but these students and their families may not want to disclose their status due to lease violation or because they’re unaware of their legal rights.

The McKinney-Vento Homeless Assistance Act of 1987 is a federal law that provides funding to states and school districts to ensure educational stability for homeless children and youth, including those in doubled up situations. It established the EHCY program, in which state educational agencies (SEAs) and local educational agencies (LEAs) work with McKinney-Vento School Liaisons to remove barriers to high-quality education, such as transportation, immediate enrollment despite lack of proper records, and the right to stay at the current school even after a student’s housing location has changed. School liaisons also report data about homeless school-age children to ED to better understand the prevalence of homelessness in schools and the supports they may need.

The enactment of the Every Student Succeeds Act (ESSA) in 2015 contained the first amendments to the McKinney-Vento Act in over ten years, with more rigorous procedures for SEAs and LEAs to effectively protect and provide for homeless students. ESSA also increases funding for the EHCY program up to $85 million by 2020.

Specific to early childhood is the expansion of school stability and transportation rights for younger homeless children. Under ESSA, the “school of origin,” the school the student attended before becoming homeless, now includes pre-K programs as opposed to beginning at kindergarten. Due to this change, transportation to and from the pre-K of origin until the end of the school year is now required. These changes show an increased focus on the right for homeless prekindergarten-age children to access and receive services for which they are eligible, such as Head Start, early intervention services through Part C of the Individuals with Disabilities Education Act (IDEA), and pre-K programs administered by LEAs.

Although state pre-K programs are now recognized under revisions of the McKinney-Vento Act in ESSA, access to these programs varies depending on local eligibility criteria, availability, and funding. Of all the states with pre-K programs, more than half include risk factors other than income level to determine eligibility. Almost half include homelessness or unstable housing as a risk factor, but six states still offer no universal pre-K, have no income-only requirement, and use risk factors other than homelessness and unstable housing to determine eligibility for their pre-K programs. In addition, ESSA mandates student enrollment even without proper medical records or birth certificates, but many pre-K programs may still be unaware of the new federal policy and follow other state and local enrollment requirements.

The report ranks Maine as the most improved for serving homeless pre-K students, with 53 percent of school districts offering a Public Preschool Program during the 2015-16 school year. Maine’s Public Preschool Program has no income requirement, and districts partner with regional Head Start grantees to provide full-day, year-round programming with wrap-around services, which is helpful for homeless families who cannot afford childcare or transportation services.

Overall, states still vary widely in their commitment to homeless children, but ESSA provides a new opportunity to refocus states' efforts on their youngest children experiencing homelessness. For more information, read this report from the Department of Health and Human Services for state-by-state analysis and data on early childhood homelessness.

* This post was originally written by Nicole Hsu and published on July 7, 2017. It was re-published with a new introduction by Aaron Loewenberg on November 18, 2019 to commemorate National Homeless Youth Awareness Month.