In Six States, Religious Child Care Centers Operate With Little to No Regulation 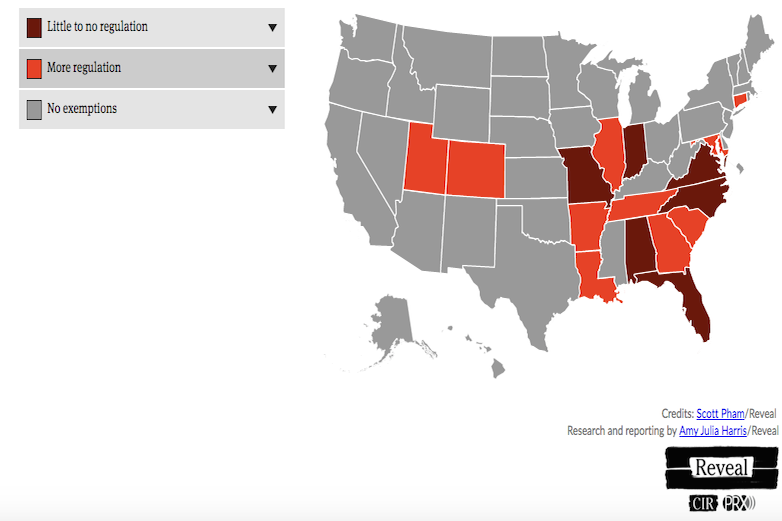 As a new parent signing your child up for child care, you could be forgiven for making certain assumptions about the type of facility in which you’re entrusting your child for several hours each day. You might assume that all staff members have passed criminal background checks and received training in basic child safety, such as CPR. Or that the child care center is required to meet certain staff-to-child ratios so that one staff member is not responsible for supervising dozens of small children at a time. Or, at the very least, you might assume that your child is safe from corporal punishment such as spanking while there.

And, in most cases, these assumptions would be correct. But, as Amy Julia Harris has recently pointed out in a series of eye-opening articles for The Center for Investigative Reporting, several states have carved out exceptions to such regulations for faith-based child care centers. These are child care centers that are affiliated with religious groups and are therefore exempt from the requirement to operate with a license. While 16 states allow some exceptions to child care regulations for faith-based organizations, these six states offer religious child care providers the most leeway when it comes to regulations: Alabama, Indiana, Missouri, Florida, North Carolina, and Virginia (see map below).

This lack of common sense regulation can have serious consequences. In Virginia, an infant died after being placed face down in his crib. His death was ultimately ruled to be caused by sudden infant death syndrome (SIDS). Had the infant’s child care center been licensed, Virginia state law would have required the workers to take 16 hours of training each year that includes learning that infants should never be placed on their stomach to sleep. But, since the child care center was faith-based, the workers at the site were not required to receive training about child safety. While charges against the workers were ultimately dropped, the judge pointed out that if the child care center had “been subject to the regulation and inspection required of secular day-care centers, many of the SIDS risk factors would not have been present.”

Child care providers in these six states have a financial incentive to claim the religious exemption from licensure. Less regulation means lower costs for these facilities because they can hire fewer workers and avoid the building upgrades that government inspectors might require. Despite this lack of government oversight, thousands of these providers still collect millions of dollars a year in government funding to care for children from low-income families. Between 2011 and 2014, for example, religious child care providers in Alabama and Indiana alone collected over $235 million in government child care subsidies. As Clare McCann has pointed out, a federal subsidy should serve as a signal to parents that the child care center has met some basic standards of health and safety. But that’s not currently the case in the handful of states that allow religious child care providers to operate with extremely limited regulation.

The 2014 reauthorization of the Child Care Development Block Grant (CCDBG) offers some reason for optimism when it comes to ensuring basic health and safety standards for license-exempt providers. The reauthorization requires criminal background checks and on-site inspections for all providers receiving federal funds, including those who are license-exempt such as faith-based providers. The annual inspection will ensure compliance with health, safety, and fire standards, and states must also:

Religious child care providers provide an important service for many communities. Many parents who receive child care subsidies face several obstacles to accessing high-quality child care and feel comfortable in the knowledge that they can drop their child off at a nearby faith-based provider to be cared for. But all providers, whether religious or secular, who are entrusted with caring for young children should be held responsible for meeting at least basic health and safety standards. Given that children learn and develop so rapidly during their early years, we’d also hope, though, that states would take a step further and also require these providers to meet any educational requirements for early care and education providers established by the state. While some providers are exempt from licensure, none should be exempt from basic, common sense regulation.