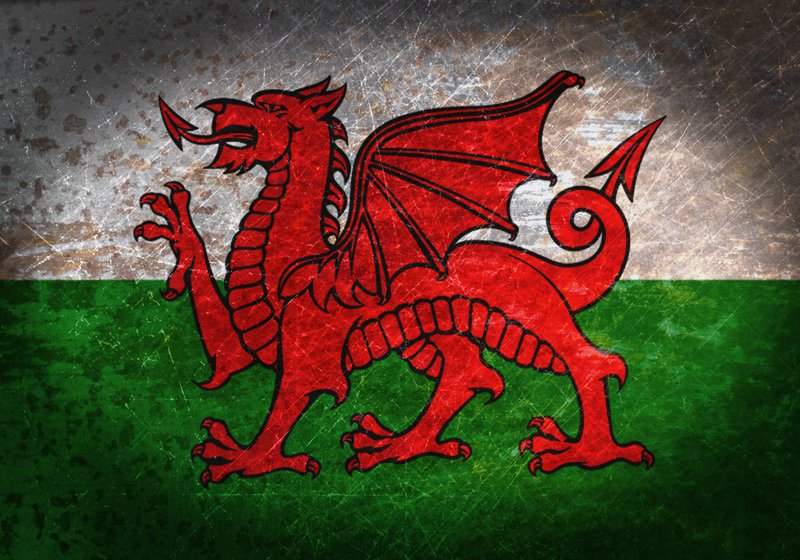 Every marriage involves compromises. There's a back and forth trading of new roles and responsibilities. There's also a halting process of learning just how your spouse makes it through each day, how they get by—and what sorts of challenges that poses for you (and vice versa, obviously). And in some cases, like mine, there's the requisite enrollment into a centuries-old nationalist/linguistic movement.

Ha ha, but honestly, I'm lucky to be joining my Welsh wife and her relatives on their quest to sustain their linguistic tradition. As American poet Bob Holman points out in his recent PBS documentary, Language Matters, the Welsh linguistic identity has survived enormous political, cultural, and economic pressures and appears to be on a path to long-term health. Despite more than 500 years of uninterrupted political control and cultural pressure from their English neighbors (including an extended period when the British Empire was the world's dominant power), the Welsh have kept their language alive.

Around half of the world's 6,000 languages are expected to survive the next century.

Many, many languages have not been so lucky. Around half of the world's 6,000 languages are expected to survive the next century. For all of our talk of a flourishing, flowering 21st-century where individuals can use technology and political liberties to construct the lives they want, this shrinking linguistic pool suggests that the world is actually homogenizing. The documentary takes it as a premise that this is a bad thing.

But wait. If languages offer diverse views of the world, they also offer a variety of wagers about which things matter and how our community interacts with those. Linguistic diversity divides us. We can celebrate differences—for this is what it means to be modern and civilized—but they are still differences. And the differences enshrined in the languages that distinguish us have a long history of sparking bloodshed.

Why should we preserve languages? After all, since the fall of the Tower of Babel, humans have been at one another's throats over the ethnic, cultural, national, religious, and various other differences that languages represent. Conquering armies have often made the crushing of domestic languages a secondary campaign in lands they dominate. As British linguist David Crystal puts it in the film, “We’ve got a Welsh nation that is proud of its identity, wants to be separate from England, wants to be independent...the best way of stopping that happening is to put in your troops. And where to you put your troops? You put them in a castle. And as you go from East to West across North Wales, the castles get bigger and bigger and bigger.”

So: what if linguistic homogenization is a path to peace—or at least some greater degree of human understanding? Globalization may be making us all more alike, but if that makes it less likely that we will find ourselves sufficiently different to resort to violence, then perhaps that growing homogeneity isn't actually a bad thing. At Babel, the Judeo-Christian God scatters humans and confounds their tongues that they might be chastened in their ambitions to rival His perfection. He sparks a proliferation of languages as a punishment for human pride, and his punishment aims at impeding human understanding. More languages make us strange, unfamiliar, and ultimately...dangerous to one another.

Cosmopolitanism is about tolerating a wide variety of lives, values, and languages. But that rests on a core commonality of tolerance. Which ought to give us—and Holman—pause. Is the loss of linguistic diversity part of a broader global trend towards common values? Is it a natural accompaniment to the growing hegemony of modern liberal values regarding the value of human life, dignity, self-determination, and more?

Research suggests that the structures of various languages actually influence how children develop their sense of numbers, quantities, and the broader mathematical world.

Maybe. Or maybe not. These sorts of theories are hard to test—let alone prove. But global multilingualism has considerable reasons to recommend it as well. Holman explores these through interviews across Australia's Goulburn Island, Hawaii, and yes, fair, beautiful Wales. He and his partners wonder if the loss of languages might represent a substantive loss of human wisdom. Not just in the obvious way—by the evaporation of various symbols and sounds—but also by the erosion of intuitive knowledge contained in each language.

For instance, one of the the ten tongues spoken by Goulburn Island's 400 inhabitants incorporates various words for the area's plants and animals in ways that capture seasonal subtleties of how these are interrelated; some of these nuances are untranslatable. Holman explains, “A culture evolves a language it needs, and what historic Aboriginal culture needed was a language chock-full of information about plants, animals, and the ecosystems in which they live…[their] words have always been a survival kit.” Or, to borrow a more famous example, languages that developed in the Arctic famously have countless words for subtly different forms of snow.

What if these still-relatively-banal examples just scratch the surface? What if the innumerable bits of wisdom embedded in threatened languages is even more substantive? Various languages have evolved myriad ways of representing quantities. The French, for instance, count to soixante-neuf (sixty-nine) and then go to soixante-dix ("sixty-ten"—or 70) all the way up to soixante-dix-neuf ("sixty-ten-nine"—or 79) and then quatre-vingt ("four twenties"—or 80). And the pattern continues—99 is quatre-vingt-dix-neuf ("four-twenties-ten-nine").

These differences matter. Research suggests that the structures of various languages actually influence how children develop their sense of numbers, quantities, and the broader mathematical world.

And what if there is still deeper knowledge embedded in a language? What if French really is the "language of love?" Various languages, for one reason or another, have developed sophisticated emotional, moral, and spiritual vocabularies that defy translation. What if Khams Tibetan contains a particularly profound way of depicting and conveying familial connections? Languages contain the best and worst habits, predilections, biases, and insights of the communities that speak them. Each of these combinations—be they Welsh, Hindi, Navajo, or Miyako—contains powerful information for making sense of the problems facing all humans.

If all of this is so, losing a language means losing knowledge of the world that is at once subtle and comprehensive, unique, and intuitive. It means losing pieces of information, certainly, but it also means reducing the number of perspectives we have for viewing the world. Or, to put it best, it means losing world views. Think of a language as a shortcut that obscures some things about human experience and elevates others.

Of course, multilingualism in an individual is not identical to multilingualism in a country. And not all multilingualism is the same. Holman and many of his colleagues bemoan the loss of small languages in the face of the largest ones. A world full of multilingual individuals who all speak English, Mandarin, Spanish, and French would still be a linguistically poor world. It might be more cognitively flexible and broad minded, but the global culture would lose inconceivable amounts of cultural knowledge. By comparison, an individual who speaks English, Mandarin, Spanish, and French is clearly overflowing with linguistic assets.

And yet, perhaps these different forms of multilingualism are not so distant after all. For a bilingual citizen ought to glimpse the possibilities inherent in other languages beyond the two she already knows. A country with three or four widely-used languages may already be cognizant of the breadth of experience that each brings to its community. That country ought to be open to the possibilities inherent in other tongues. It ought to be innured against xenophobia and parochialism. Which is, I suppose, to offer a possible answer to the worry that I outlined above regarding the potential for languages to divide us.

Words are our catalysts for dreaming—and inventing a different and future world. They are the threads from which we weave the emotional cloth of our lives.

Of course, I can't prove that either. But it doesn't matter, since the most important reason to safeguard the world's wide array languages is to celebrate that which makes us human. We are defined by our open-endedness. By our ability to develop the world in creative ways—and to put names to the novelties we make. Since the Ancient Greeks, philosophers and artists alike have struggled to find a unifying purpose for humans, a singular thing we are meant for...and yet humans defy that question.

We are simply too much for it. We are too wide for it. And this is in large part because of the languages we use. Words are our scaffolding for making sense of the world we have. Words are our catalysts for dreaming—and inventing a different and future world. They are the threads from which we weave the emotional cloth of our lives.

Without words, without language, how would you experience despair or exultation? You wouldn't. At least not the way you feel them now. Nor could you articulate whatever you were going through in that moment.

So: if humans are for any one thing, we are for communicating. For talking. And singing. And reading. And writing. Which is why the sort of mass linguistic extinction Holman and others detect on the horizon would be such a catastrophic loss.