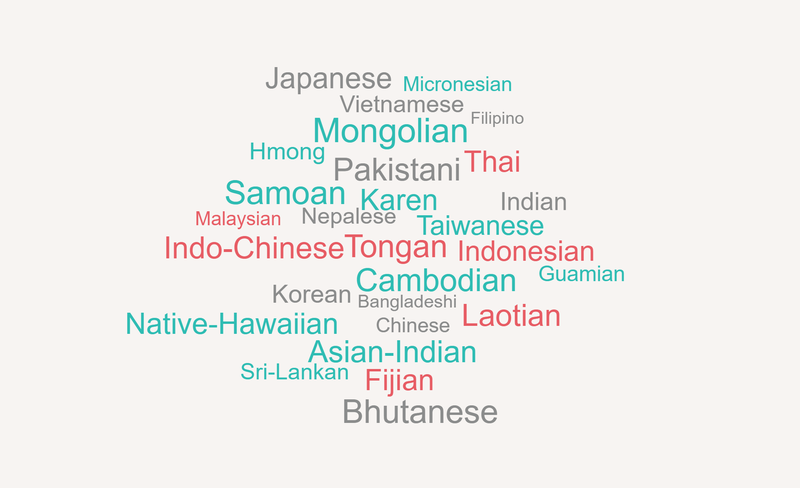 May was officially designated Asian American and Pacific Islander (AAPI) heritage month in 1992, but that wasn’t the first time the term ‘Asian American’ entered the American lexicon. Asian American was originally coined in 1968 in an effort to harness the political power of various communities with roots in the Asian continent. Over time, this term has gone through various changes and today, AAPI is commonly used as an umbrella term for various racial and ethnic identities.

The AAPI community is the fastest growing racial or ethnic group in the U.S. In 2019, over 20 different ethnic/nationality groups made up the 23 million Asian American subgroup and 10 different ethnic categories fed into the 1.5 million Pacific Islanders. Within these two groups stand individuals with diverse ancestries and languages such as Chinese, Vietnamese, Tagalog, Korean, Hindi, Samoan, Tongan, and Karen, to name a few. And although school-aged children from AAPI backgrounds are probably just as diverse as their adult counterparts, the true ethnic and linguistic diversity of AAPI English learner (EL) students is not necessarily visible in K-12 education data.

In 2018, there were about 528,700 ELs categorized as Asian enrolled in K-12 schools representing the second largest racial/ethnic group behind Latinx students at roughly 11 percent. And in 2016, there were 39,153 Native Hawaiian/Pacifiic Islander (NHPI) ELs enrolled in U.S. schools representing 0.8 percent of the national EL population. In terms of linguistic background, four Asian languages are commonly identified among the top 11 languages spoken by all ELs. In 2017-18, for example, Chinese was the third most common language among ELs, and the previous year it was reported among the top five languages spoken among ELs in 33 states. Other Asian languages included in the top 11 list for ELs in 2016 included Vietnamese (5th), Hmong (8th), and Korean (11th).

In terms of where these students live, there is significant overlap between states that enroll a high number of Chinese and Vietnamese ELs (Figure 1). English learners from NHPI backgrounds are similarly concentrated in certain hubs around the country as over half of them are distributed across only 25 local education agencies (LEAs).

Certainly there is power in numbers as areas with higher concentrations of AAPI English learners are better able to tailor language programs to the specific linguistic needs of those students. The student body at Westminster School District in Southern California, for example, is almost 50 percent EL and those students are just about equally split between Spanish (55 percent) and Vietnamese (41 percent) speaking ELs. Given this composition, the school district developed and implemented dual language immersion programs in both Vietnamese and Spanish, becoming the first in the state to implement a Vietnamese dual language immersion program.

While these data and responsive education programs provide insight for some of our AAPI English learners, little is known about other ELs with origins in less represented Asian countries. This is because education data is rarely disaggregated to account for the smaller racial and ethnic groups that fall under the broad AAPI label. The ethnically heterogeneous students that fall under the Asian EL subgroup are socioeconomically diverse and come to the classroom with vast educational needs influenced by unique backgrounds and realities. This means that without proper disaggregation, the Asian label can not only mask important trends and needs, but also perpetuate inaccurate assumptions and harmful stereotypes about their academic abilities.

The lack of transparency for many AAPI students, particularly those from Southeast Asian backgrounds, has led advocates to push for the Asian subgroup, including Asian ELs, to be disaggregated. Advocates and researchers argue that when you pull back the AAPI label, significant disparities become more evident which can help educators serve them better. Although some of the groups represent relatively low rates at the national level (like the 0.8 percent of NHPI English learners), some of these racial and ethnic minorities can have more impactful rates at the local level. In Dubuque Community School District in Iowa, for example, NHPI students represent 54 percent of all ELs with 143 of their 267 ELs identified as NHPI. This means that although NHPI English learners may not represent a statistically significant number nationally, local education leaders in this community must learn about the particular needs of these students if they intend to equitably serve them. And the same can be said for other minority Asian groups across the country, but first we need better data.

The National Clearinghouse for English Language Acquisition currently has three fact sheets dedicated to AAPI ELs which includes those who speak Vietnamese, Chinese, and those who identify as NHPI. These resources represent progress considering that until 2007, identifying as Native Hawaiian or other Pacific Islander wasn’t even an option for purposes of education data, and neither was belonging to two or more races. But as previously stated, roughly 30 different identities fall under the ‘AA’ and ‘PI’ branches of the AAPI tree. Third sector organizations like AAPI Data have stepped in to fill in some of the gaps that exist in relation to AAPI communities by disaggregating data from the U.S. Census and creating profiles for each AAPI racial group. Key topics include population growth, age distribution, education attainment (post high school), and income and poverty levels, among other categories. However, as these data are largely focused on those over the age of 18, there is significant room for improvement in how we collect and share AAPI student data, including those classified as ELs, in K-12 education.

While the AAPI umbrella may prove useful for its original intent for political mobilization, the same cannot be said for its application in the education space, and we must work to create a system that provides each racial and ethnic group their own umbrella. As it currently stands, there are more questions than answers about the linguistic needs and academic opportunity of English learners that belong to less commonly known Asian subgroups. This means that we have our work cut out for us between now and the next AAPI commemoration.