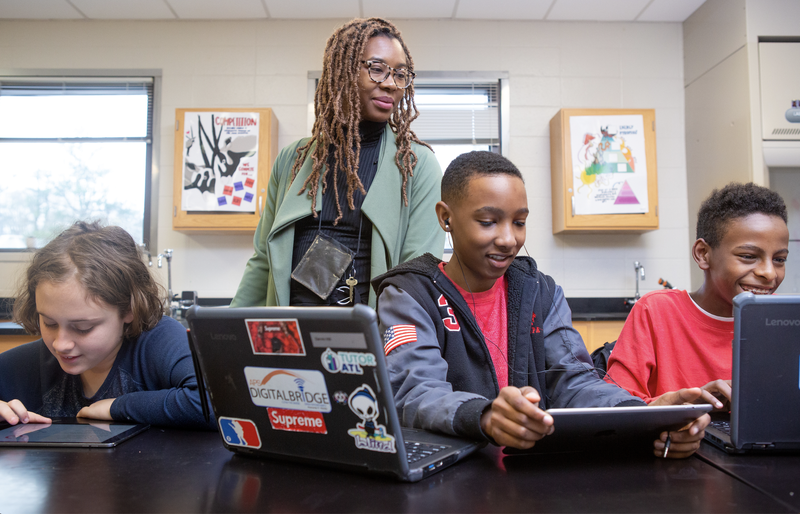 The 1954 Brown v. Board of Education decision, which declared that school segregation was unconstitutional, was a monumental step toward equitable educational opportunities for Black students. But the landmark decision had a lesser-known consequence: it catalyzed the firings, forced resignations, and demotions of many highly experienced Black teachers and school leaders.

Some estimate that prior to the Brown decision, Black teachers made up between 35 to 50 percent of the teaching force in the 17 southern states that mandated segregation. When schools in these states began to desegregate after the Brown decision and subsequent legislation, such as the Civil Rights Act, the onus was on Black students to attend predominantly white schools. This led to school closures in Black communities and inevitably to Black teachers being pushed out of classrooms. As a result, between 1954 and 1965, 38,000 teachers and administrators educating 2 million Black students lost their jobs.

Without teacher diversity, students lose: research shows that having one Black teacher by third grade increases a Black students’ likelihood to graduate high school by 7 percent and to enroll in college by 13 percent. After having two Black teachers, that student is 32 percent more likely to enroll in college. Clearly, creating a more diverse teacher pipeline is necessary if we will address the continued student achievement gaps along racial and socioeconomic lines.

Recruiting and preparing a diverse workforce will require policies and investments that plug holes across the teacher pipeline. Even now, Black teachers and other teachers of color are less likely to enroll in college or teacher education programs. If they do attend college, these candidates are more likely to be saddled with student loan debt than their white counterparts, which makes them less likely to pursue a career with lower pay. Candidates that make it through teacher preparation programs sometimes struggle to pass certification exams, which are estimated to screen out as many as 8,600 of 16,900 aspiring teachers of color each year. The question that remains is what decision makers can and should do to fill these gaps.

In the last couple of years, state leaders have begun setting teacher diversity goals and making teacher diversity data publicly available, according to a recent nationwide scan by the Education Trust. The same scan finds that states such as Florida, New Mexico, and Wisconsin are investing in scholarship and loan forgiveness programs to draw teachers into the profession. A handful of states, including Georgia and New York, are eliminating requirements that disproportionate screen out candidates of color.

The federal government has yet to play a substantive role in diversifying the teacher workforce—but this could change under a Biden-Harris administration. Their platform has a strong focus on diversifying the teacher profession, including by providing grants to school districts that develop diversity strategies, expanded dual-enrollment programs for high school students who want to study education in college, and bolstering education programs at minority serving institutions.

The incoming administration should fulfill their commitment by using all of the tools in their toolbox, including messaging, research, and funding. Perhaps most importantly, the Biden-Harris administration must appoint a secretary of education that uses their platform to espouse the value of diverse and community-rooted teachers and leaders. The US Department of Education can also play a big role in strengthening the availability of research that provides greater insight into diversity gaps and the benefits of addressing them.

When it comes to funding, there are a number of ways to support aspiring and current teachers of color through existing avenues. For instance, providing funding to programs such as the Developing Hispanic-Serving Institutions Program and the Augustus F. Hawkins Centers for Excellence in the Higher Education Act, which supports minority-serving institutions like Hispanic Serving Institutions (HSIs), Historically Black Colleges and Universities (HBCUs), and Tribal Colleges and Universities (TCUs).

Importantly, funds are also needed to strengthen partnerships between districts, universities, and preparation programs. The administration should increase investments into residency programs through its Teacher Quality Partnership (TQP) grants program, as these funds provide high-quality pathways for candidates that often attract teachers of color. The TQP grant program should be expanded to allow for programs to provide candidate scholarships as well as to fund Grow Your Own (GYO) programs, which recruit local teachers to meet gaps in local schools. New grants should encourage partnerships between two- and four-year colleges, since many students of color begin their career at community colleges. Additionally, sustained funding for the P–20 partnership grants could encourage the use of strategies that attract and retain candidates of color through early recruitment initiatives, intensive mentoring, and cohort models at universities.

While the Brown decision was an important step in creating equitable educational opportunities for Black children, the unintended consequences for Black teachers remain unaddressed. The incoming Congress and Biden-Harris administration has an opportunity to reinvest in communities that have been historically neglected and under-resourced by focusing on teachers and leaders. Black, Hispanic, Indigenous, and other teachers of color still remain largely absent from the nation’s teaching and principal force and any attempt to “build back better” from the COVID-19 pandemic must include a focus on creating a strong pipeline for high-quality, diverse educators.