To Help Young Boys of Color, Oakland Looks to Leadership from their Parents 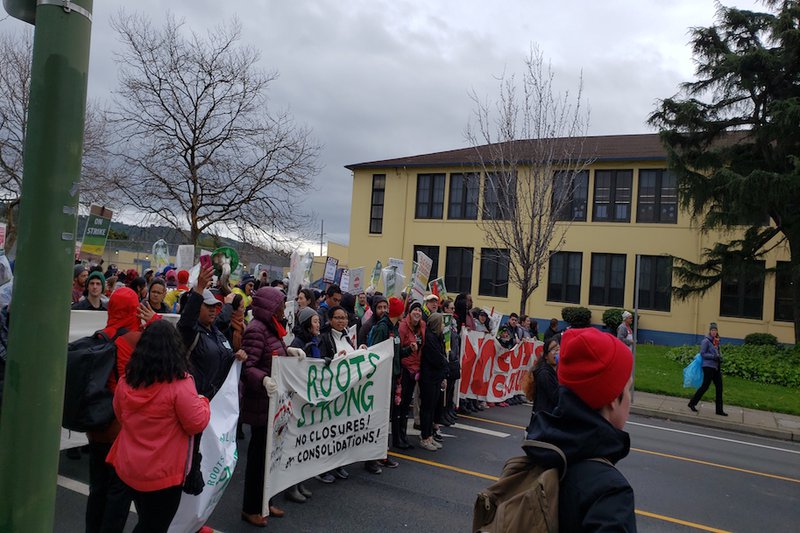 In a community room in Oakland, parents of boys of color are drawing their hopes and dreams for their children on a big piece of butcher paper. Amid the usual visions for the future—go to college, be healthy—some statements are striking: “to just survive,” one writes. To “stay out of jail,” another says.

A new study from Stanford University published this month, shows that the local school district is making progress in supporting African American boys growing up here—to stay safe and to thrive. But hurdles for boys of color—including those from the city’s diverse immigrant communities—remain. Boys of color are less likely than their white peers to be ready for kindergarten and are more likely to fall behind as they progress in school.

But an important source for helping these boys succeed may lie with their families. A new community coalition is helping parents and caregivers become community leaders so they can advocate for their children in the city’s public schools and other civic institutions, starting in the early years.

“We need parents to lead for change,” said Monica Scott Green, a program director with Bay Area PLAN, a social justice organization that trains parents to be leaders in the city. “That’s where the passion is, that’s where the wisdom is.”

Research shows that parents and caregivers have deep expertise in how to build resilience in their own children and to help their kids succeed. But they often feel marginalized in the city’s public schools, Green and her colleagues say. Teachers in Oakland are unlikely to come from the same communities as children of color, there are very few male teachers for young children, cultural bias exists, and families can feel unwelcome.

“We felt like PLAN’s skill set was very unique,” said Priya Jagannathan, the manager of Oakland Starting Smart and Strong, the community coalition that hired PLAN. “We felt like it was very important to center and have leadership from local parents of color.”

Claudia Inda is one of the parent leaders. Inda attended regular training in the evenings with other parents to become a facilitator as part of PLAN’s Parent Organizing Fellowship Program. Inda learned about issues facing young boys of color in Oakland and how those issues intersect with politics and education. The group also affirmed families’ culturally-based knowledge about child rearing.

This work aims to build a larger group of parent advocates to demand more resources for young boys of color in the Oakland Public Schools and to improve the experience of those children once they get there.

Inda said the most surprising part for her was learning about how the school budgeting process worked and how money flows down from the federal and state governments to individual districts and schools.

“Before, I didn’t know anything about that,” Inda said. “I would like to know more. The more I know, the more I can do.”

Inda came to the U.S. from Mexico when she was in her twenties and didn’t have a lot of support when she was going through school. She said she had no one to teach her about how the U.S. school system worked and how to get support for her son, an English Learner.

“They need more help academically and emotionally and the majority of them are left behind, because of the language barrier,” she said.

Through her work with PLAN, Inda was able to connect with other parents who shared her concerns and feel less alone.

“I know I am not the only one. If we work together we can make changes,” she said.

Sasha Shane, a senior parent organizer with PLAN, said that though research shows family engagement is very important for student success, too often teachers and administrators feel like it is outside the scope of their jobs.

“When we have parents conducting events and asking tough questions, that is something that culturally the school is not used to,” Shane said. For example, parents come to meetings and ask for interpreters so they can understand the budget process and how money is allocated. “A lot of teachers and principals are resistant to that.”

By building a cadre of parent leaders in Oakland who are empowered to fight for change, PLAN hopes to change the culture at local schools and to improve equity.

Inda said she is interested in working on issues of early literacy and also on equity in sports offerings. She’s noticed that schools in the Oakland Hills often have vast more opportunities for extra curricular programming than those in Oakland’s more low-income and diverse flatlands.

In the past, groups of PLAN parent organizers have, for example, worked to make sure Oakland Unified is a sanctuary district that protects students of color, Muslim students, bilingual students, and LGBTQ students. In addition to the young boys of color campaign, PLAN currently has parent organizers working with black parents who have children with special needs, in the Arabic speaking community, and with school council members in San Leandro who speak Spanish.

This summer, Oakland Starting Smart and Strong published a Promising Practices Portfolio that detailed strategies for supporting young boys of color and their families. A working group made up of early health and education providers and advocates from around the city came together to explore local and national research and to identify and recommend practices that local agencies are already using to support young boys of color.

The report found that the needs of the diverse boys of color in Oakland, many from the city’s immigrant communities like Inda’s son, have “often gone unrecognized in approaches to early learning, and disparate outcomes persisted,” an experience the authors note “has been compounded for many Oakland families of color by economic, social, and language barriers.”

Parent and community leaders will be sharing the findings of the report and plan to use them to advocate for change.

“When we are united,” Inda said, “we are very powerful.”