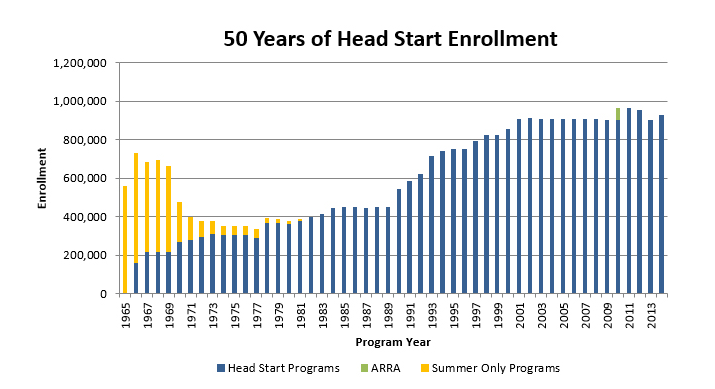 Fifty years ago today, in the White House Rose Garden, President Johnson announced the goal of Project Head Start: “We set out to make certain that poverty's children would not be forevermore poverty's captives.”

Head Start began as a eight-week long summer program that aimed to prepare low-income children for kindergarten in the fall, provide them with medical and dental services, and help parents improve their home environment. On this day, Johnson announced the creation of 2,500 Head Start projects that would serve over 500,000 children in approximately 11,000 Child Development Centers across the country. Only $112 million federal dollars were allocated to the program.

Within a matter of months, policymakers realized that for many children, a short summer program would not be sufficient to counteract the negative effects of poverty. As a result, the federal government began funding year-round services for select children and slowly phased out the summer program. Since then, this dual-generation program has continued to change and expand (check out The Office of Head Start’s comprehensive timeline here) to better meet the needs of young children and families in poverty.

Today, more than $7.8 billion is allocated to Head Start and the program serves 927,275 children nationwide. The charts below depict overall changes in funding and enrollment over time.

Over the last 50 years researchers have learned a great deal about child development, brain science, and what types of programs effectively prepare children for school. We now know that the earliest years of a child’s life are crucial to his or her future success, with the most significant growth occurring before age three. The Head Start program has transformed to align with this research. Early Head Start (EHS), which serves pregnant mothers and children up to age three, started receiving federal funding in 1995. And since then the Head Start program has served children from birth to age five and their families.

EHS provides comprehensive early intervention services, including home visiting services and center-based care, to  pregnant women, infants, and toddlers. The program serves approximately 20 percent of Head Start enrollees, or about 6,000 pregnant women and 150,000 children. Last month, Mathematica Policy Research released the third and final report on the Early Head Start Family and Child Experiences Survey (Baby FACES), a descriptive study of Early Head Start programs that followed 194 pregnant mothers and newborn children and 782 one-year-old children until the children turned three or left the program. Toddlers in Early Head Start: A Portrait of 3- Year-Olds, Their Families, and the Programs Serving Them provides insight into EHS’s services and finds that the program has a positive impact on numerous aspects of children and families’ lives.

The researchers measured children’s social-emotional skills through multiple means and concluded that children’s non-cognitive skills improved during program participation. Children’s English vocabularies increased rapidly at age one and continued to increase at a slower rate until age three. The average length of enrollment in EHS was 28 months, but dual-language learners stayed in the program longer and were more likely to utilize home visiting services than their peers. While center quality did not appear to be predictive of most child outcomes, it was positively associated with  language abilities at age three.

Unfortunately, only four percent of eligible children participate in EHS due to limited funding. The Obama administration and members of Congress have made expanding access to EHS a priority, but funding still falls well below the levels necessary  to serve all children who could benefit. Last year the U.S. Department of Health and Human Services awarded $435 million in 234 different EHS-Child Care partnerships grants, which aim to expand the reach of EHS and improve the quality of child care centers. The President requested an additional $150 million for this initiative in this year’s budget.

While Mathematica’s findings on EHS are promising, the overall research on Head Start's effectiveness has produced mixed results in recent years, meaning there are still many improvements that can and should be made to the program. Policymakers acknowledge the need for change too. The Administration for Children and Families, which oversees Head Start, is in the process of rethinking the current program standards and is expected to release them sometime soon. Additionally, the House Committee on Education and the Workforce has outlined its general priorities for Head Start reform and asked for public feedback by June 1, 2015. Here at New America, we've also been thinking about what a reauthorized Head Start might look like. In Beyond Subprime Learning: Accelerating Progress in Early Education, my colleagues suggest streamlining Head Start standards, experimenting with Head Start grants to qualified states, and increasing the U.S. Department of Education’s role in program administration.

As Johnson said in the Rose Garden 50 years ago today, “children are inheritors of poverty's curse and not its creators. Unless we act these children will pass it on to the next generation, like a family birthmark.” In order for Head Start to more effectively reduce inter-generational poverty, the program must continue to respond to the growing body of research around early education and child development, and it must be funded at levels necessary to meet the needs of all eligible families. This is the only way to ensure that eligible children are receiving the type and quality of services they need."