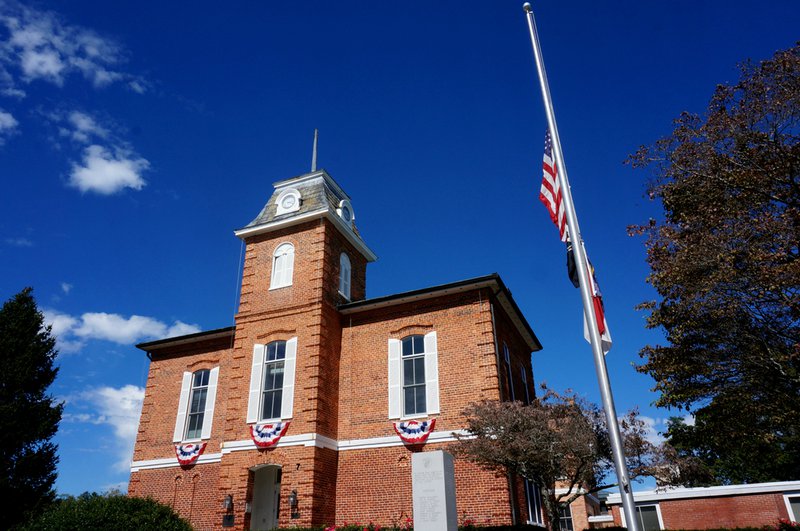 The courthouse in Brevard, North Carolina, the seat of Transylvania County.

Sometimes termed an educational “forgotten frontier,” rural counties educate nearly a quarter of the nation’s preK-12 students and are disproportionately affected by poverty; over eight out of ten of the nation’s persistently poor counties are rural. “Outside of the spotlight,” writes Boston College Professor Andy Hargreaves, “rural teachers can choose how to fill the vacuum left by federal education policymakers, and they are not sucked so readily into the vortex of much urban school reform either.”

This choice is particularly complicated in the mixed-delivery early childhood education sphere. Sixty percent of rural Americans live in child care deserts, meaning that there are three young children for every one child care seat—or, there are no spots at all within a reasonable distance. Isolated from resources and capacity-building tools, rural districts can struggle to implement large-scale education reforms. Still, these communities have worked to increase access to and the quality of more traditional early childhood programs. Policymakers and educators have pursued their goals through multiple approaches according to their unique needs, including instituting universal pre-K, establishing community partnerships, and creating opportunities for collaboration among educators.

In Transylvania County, North Carolina, a 2015 report by the county’s Early Childhood Initiative revealed that over half of incoming kindergarteners were not coming to school prepared to learn—78 percent tested “below” or “far below” kindergarten proficiency levels at the start of the 2015 school year. This could be explained by limited access to high-quality, affordable services for children aged birth to five. Child care costs are steep in this rural Appalachian county of 34,000. In a two-parent household where both parents are employed, paying for early education for one child will take up to 28 percent of their combined yearly income. For perspective, the federal department of Health and Human Services defines “affordable” child care as costing no more than seven percent of a family’s income. Additionally, Transylvania’s residents face obstacles common to many rural areas, such as a high rate of infants born addicted to substances and average household incomes below the state average. The Early Childhood Initiative came together to address the kindergarten readiness gap by responding to these specific county issues.

To better meet the needs of parents and children, community leaders capitalized on existing capacities to launch Get Set Transylvania, a partnership comprised of 22 county organizations, eliminating the expense of a separate non-profit to manage the initiative. “We know each other and have established a great partnership with a collaborative spirit. We realize efficiencies without duplicating services, and no one is in it to receive credit,” said County Commissioner Page Lemel. In 2018, Transylvania County became the first rural community in the nation to partner with Sesame Workshop’s Sesame Street in Communities (SSIC) initiative, which provides resources, strategies, and support for providers and parents in the form of funding and access to a library of multilingual multimedia tools for children from ages birth to six. SSIC and Get Set have partnered with other county organizations to focus programming on topics relevant to the community such as childhood traumatic experiences, resilience, and school readiness.

Across the country in Tulare, California, the youngest students in Lindsay Unified School District were coming to kindergarten facing similar obstacles. In Lindsey Unified, 94.5 percent of the 4,085 enrolled students are classified as coming from socioeconomically disadvantaged backgrounds. Many are the children of migrant farm workers employed on surrounding orange orchards and over half are English language learners (ELLs). In recent years, kindergarten was the first time many children entered a formal learning setting, and teachers reported "stark" differences between those who had attended pre-K and those who had not. For seven years, Tulare County families had access to universal pre-K through programs funded by the First Five Association of California. In 2010, the non-profit shifted its attention to family health issues and was no longer able to fund pre-K programs on the same scale. After this organizational pivot, families who would have previously enrolled their children in First Five centers found themselves ineligible for subsidized pre-K and/or could not afford the limited private programs in the area. They were thereby forced to forgo pre-K altogether.

In response to teacher feedback and internal research on kindergarten readiness, Lindsay Unified has combined funding streams to implement a new, district-run universal pre-K model, ensuring that all children from birth to age four can attend a free program, regardless of their parents’ income. Transportation is provided to and from the full-day program, which is especially helpful to parents who are migrant farm workers with inflexible work hours. The district has financed these programs through a combination of funding streams: California State Preschool funding, Migrant Education Program funding, and K-12 special education funding. It also has access to additional funds through a Local Control Accountability Plan (LCAP). LCAP allows districts to exercise discretion over state formula-funding and allots additional money designated for "high need" students, such as those from low-income backgrounds, ELLs, and children in the foster care system. Lindsay Unified’s LCAP funds totaled $150,000 for the launch of universal pre-K during the 2017-2018 school year, opening up 48 spots across 11 different programs.

Policymakers and teachers are coming up with creative innovations in early childhood education in other rural communities across the country. In the Pacific Northwest, Boston College has partnered with a local organization to create the Northwest Rural Innovation and Student Engagement network (RISE), a professional learning community for teachers in rural schools across five states. RISE encourages teachers to draw on competencies students develop specific to their environment, such as hands-on and land-based learning. In Indiana, program managers for On My Way Pre-K, the state-funded pre-K initiative, have engaged in grassroots recruiting efforts targeted specifically to rural counties. Organizers have worked to make sure parents know about the program, that communications are conducted in ways they feel comfortable with, and that they meet all eligibility requirements.

In the communities profiled above, county leadership and other stakeholders have come together to expand and enhance opportunities for early childhood education. They have established community partnerships, responded to students’ needs by creatively finding funds for universal pre-K, engaged in grassroots rural recruiting to ensure the expansion of a state-funded preschool pilot, and engaged their teachers through professional learning networks. Each of these stories points towards a singular lesson: rural communities have unique potential as well as unique needs. Despite the challenges they face working to provide early care and education, many are coming up with their own solutions.