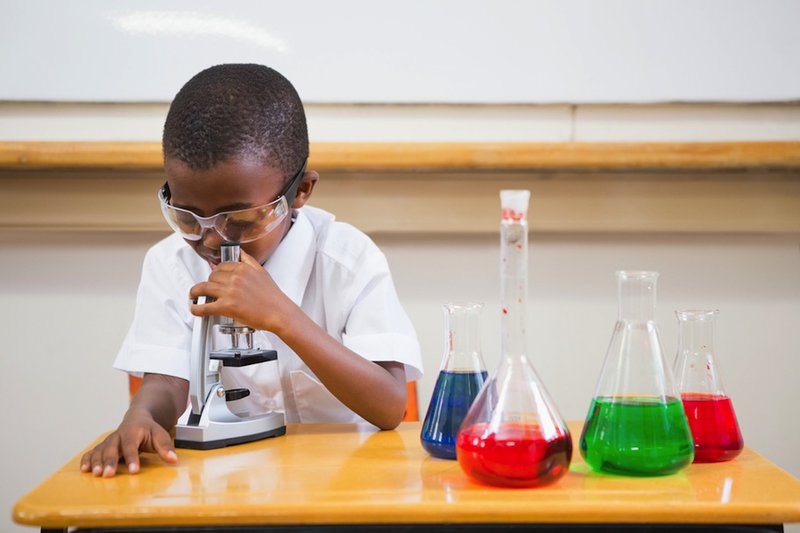 On the morning of my first pre-K classroom observation, I walked down a colorful hallway clutching a notepad and documents that are part of the ECERS, a tool for assessing classroom environments. The sound of splashing greeted me as I reached to knock on the door. As the teacher welcomed me, I noticed a group of children playing at a water table in the center of the room -- smacking down their hands to splash, filling cups, and stacking plastic boats.

As I conducted the observation, which I was doing as a monitor for Head Start programs across Chicagoland, I had a lot to contemplate. For example, I focused on how exactly the presence of specific materials in the room, like the water table, contributed to meaningful learning in science, technology, engineering, and math (STEM).  As I visited other classrooms, I took note of how disparate their environments seemed. Some classrooms contained well-planned science corners, overflowing with live plants and anatomical models, while others simply had a cabinet with one or two math-focused games. I asked myself - what do we really know about the materials and practices that best support young children’s STEM learning?

Earlier this month, a group of early learning experts including teachers, teacher educators, researchers, and administrators convened for a two-day forum hosted by New America and the Joan Ganz Cooney Center at Sesame Workshop, to discuss possible answers to this question. Building from dialogue started at a White House Early STEM event in April, participants talked about how to bridge the gaps between research, practice, and policy to improve STEM education during the early years. An overview of the forum from the Joan Ganz Cooney Center is also available.

The forum included a keynote by Deborah Phillips of Georgetown University and a panel discussion that highlighted research findings and challenges in the early childhood workforce, which will be the topic of the second part of this blog series.  It also featured another panel discussion on best practices in STEM education in the United States and internationally.

The panel was comprised of domestic and international education experts, particularly in early STEM, including Doug Clements, Executive Director of the Marsico Institute of Early Learning at the University of Denver, Mike Smith, Visiting Scholar at the Carnegie Foundation for Advancement of Teaching, and Vivien Stewart, Senior Advisor for Education at The Asia Society. Throughout the discussion, they shared insights on successful early STEM efforts and the future of STEM education in the United States. (To view a video clip of the speakers and panel discussion, click here.)

Clements highlighted the importance of shifting teacher focus from grade level objectives to long-term trajectories, spanning from birth through career, that emphasize each step of the learning process. For example, Clements explained that early childhood teachers could play a geometry game where students begin by simply recognizing shapes and build up to identifying shapes based on their properties. According to Clements, these types of activities not only boost STEM understanding, but enhance language development and executive function as well. He emphasized that, “although numbers and shapes are important, there’s something else about early STEM that’s predictive, that’s cognitively fundamental. The reasoning and the thinking of early STEM, not just the content, is probably very important...It’s surprising how deep, broad, and sophisticate kids’ thinking can be.” Thus, fostering STEM trajectories, integrated across learning domains, can help ensure student achievement into high school, college, and beyond.

Stewart expanded the early STEM discussion to include best practices from around the world for building a high achieving education system. According to Stewart, “high performing systems find ways to create a long-term vision that can be sustained across political cycles, align different parts of the system -- curriculum, teacher training, and assessment -- so they work together rather than against each other, focus enormous attention on building front-line capacity and involve other sectors in supporting children.”  While other countries have more successfully developed such systems, the U.S. struggles. The 2012 OECD PISA report, an international assessment of 65 countries, ranked the U.S. 17th in reading, 20th in science, and 27th in math. Stewart also noted that the U.S. faces issues with teacher recruitment and retention that other countries have made progress in resolving.

She highlighted Singapore as an exemplar of success, outlining the country’s commitments to professional development and training, equality, and high-quality leadership. From the beginning of their careers, teachers in Singapore receive mentors and participate in teacher groups based on subject-matter where they collectively asses problems, provide peer feedback, and innovate around new teaching practices. These groups could be particularly beneficial to developing STEM content knowledge for U.S. teachers, whom Stewart cited as having far lower numeracy skills than teachers in other industrialized countries.  As their careers advance, teachers in Singapore are given leadership positions and often partner with university faculty to conduct research that feeds back into the field. Carving a similar career trajectory for U.S. teachers could help close some of the research to practice gaps that inhibit the development of high-quality STEM education practices, particularly in the early years and grades.

Singapore also addresses inequities in its education system by providing resources for struggling students from day one to ameliorate risk of failure at the end of the school year -- a practice that could help boost the poor STEM performance of U.S. students. Similarly, schools in Finland are staffed with special teachers who are available to assist students one-on-one when needed. These models have garnered praise and attention around the world, motivating interest in pilots and replications elsewhere such as in European countries and Canadian provinces.

Some states in the U.S., like California, are answering the call for innovation and attempting systemic reform efforts.  Smith outlined how California is actively reforming STEM education, particularly with the Next Generation Science Standards (NGSS). As standards move towards promoting STEM “thinking,” in addition to STEM content knowledge, California is encouraging teachers to use new tools and approaches in guiding students. Inspired by Silicon Valley, several school districts are integrating use of technology and computer science focused tools into the school day. While these cutting-edge approaches are exciting, Smith cautioned that such efforts will not be successful if they’re rooted in systems that don’t believe in or practice continuous improvement.

Elevating the importance of early STEM education to a national level in the U.S. will take an immense amount of work and cross-sector collaboration—and the work may require even more intentionality in early childhood and elementary school.  Part of the forum involved breakout sessions on various STEM and early learning topics such as family engagement and professional learning. Participants were called upon to generate ideas to assist New America and the Joan Ganz Cooney Center in crafting a plan of action and offering recommendations to researchers and policymakers. The plan aims to build upon the commitments organizations made at the White House to furthering research, promoting STEM content knowledge, supporting formal and informal learning settings, and creating equity in STEM experiences. The plan will also include insights from interviews with researchers and focus groups with teachers in pre-K and K-3 classrooms.  Look for its release this fall.