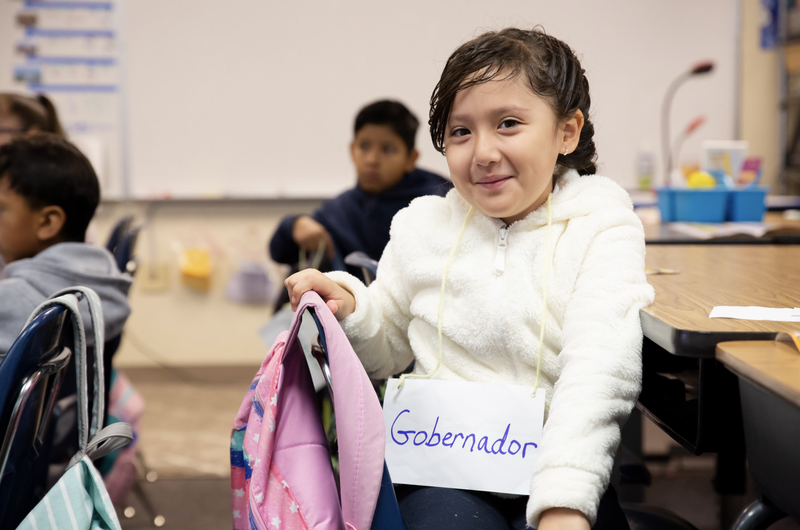 As the anniversary of the nation-wide shutdown passes the one-year mark, many California school systems have taken steps to ensure English learners (ELs) remain prioritized and unforgotten. ELs in California represent 20 percent of the K-12 population and 60 percent of children 5 and under speak a language other than English at home. Teachers have been tasked with coming up with creative new ways to engage students virtually—a daunting assignment for even the most technologically savvy educator. District leaders are similarly rising up to the challenge and reinforcing their support of ELs, both in the virtual classroom and at home.

English Learners have been among the most vulnerable during this time of educational crisis. School districts like Newark Unified in Alameda County and Oak Grove in San Jose have gone above and beyond to ensure that their students are being provided adequate support to succeed. District leaders continue to partner with teachers and have embraced parents as critical allies during the pandemic, a practice that has been previously identified to benefit ELs.

Oak Grove Superintendent José Manzo shared that he and his team worked with community liaisons to provide WiFi hotspots for over a thousand families. “The district also provided additional software, and one-on-one support so teachers are able to identify students who may have additional needs,” says Manzo of the work going on behind the scenes. Now, there are expanded plans for an interactive “summer school experience” where teachers will focus on target populations, such as homeless and foster students as well as ELs.

This hands-on approach has allowed educators to pay special attention to their ELs, who may have difficulty adjusting to virtual learning methods. “Ninety-seven percent of [all] our students are logging in and attending school every day,” says Assistant Superintendent Ivan Chaidez. School administrators are also instructed to conduct home visits to check in on families throughout this time, “If students have consecutive absences we drop in — hey Johnny what's going on, you haven’t been in class in three days, does your hotspot work?”

Research has repeatedly indicated that providing adequate support for ELs in the earlier years of their education is critical to their long-term success. School districts like Oak Grove have taken preventative measures to tackle equity barriers throughout the pandemic and stay committed to their vision for academic success for ELs and biliteracy. According to Chaidez, his district has done everything in its power to ensure ELs have had a smooth transition into virtual learning.

Establishing virtual access was the first course of action for Oak Grove leaders last spring, and with the help of classroom educators, every student was quickly assigned a personal device so that they could log into online resources and digital services. Chaidez, who calls education “the great equalizer,” says that the district continues to focus on preparing ELs for academic success through instruction and curriculum that promotes cultural and linguistic relevance and diversity. “Whether you’re from a family that has privilege or a working-class family,” says Chaidez, “education is the one factor that can even out the playing field.”

Approximately 30 miles north of Oak Grove, the Newark Unified School District has risen up to tackle similar challenges. Their school board recently approved the opening of a Spanish Dual Language Immersion Program, grades K-6 at Schilling Elementary School, set to launch in the fall of 2021. This is yet another example of a school community committed to providing quality instructional programs for their ELs, even in the face of the pandemic. The planning for this new program began in 2019 with the support of SEAL, a nonprofit educational organization that equips educators with resources and tools to support EL students.

Since the beginning, this new program has had a clear focus on serving the 64 percent of English learners within the school. With the pandemic hitting in March 2020, and a new superintendent taking over the district just a few months later, the fate of the program was not certain. Fortunately for the bilingual community, when Dr. Mark Triplett assumed his role as Newark Unified School District’s superintendent in June of 2020, he vowed to move the proposal forward. Thanks to this and the steadfast leadership of Principal Dr. Wendy Castaneda-Leal, the school community at Schilling Elementary was able to get approval for the dual language immersion after a long planning phase.

ELs in dual language programs are frequently shown to outperform their peers in English-only programs. In California, there are ongoing efforts to expand the number of dual immersion programs as part of a state initiative to get half of all K-12 students participating in programs that teach them two or more languages by 2030. And although the policy climate has shifted dramatically over the last four years with the passage of Proposition 58 and the adoption of the EL Roadmap—which outlines the state’s policy that favors biliteracy and multiculturalism— bringing life to new programs is a challenge, especially in the face of a pandemic.

The district’s February board meeting amplified the public’s desire to promote multilingual proficiency and achieve equitable outcomes for ELs. Although the conversation around dual language programming is often propagated by middle-class parents of English-only students, Dr. Triplett insists that this program is meant to serve ELs in an area where access to biliteracy is an issue of equity.

Alongside other EL advocates, Dr. Triplett has a larger vision for creating a biliterate city. “Wouldn’t it be great if everyone graduated speaking two or more languages?” he says with a smile, “how do we make that possible?”