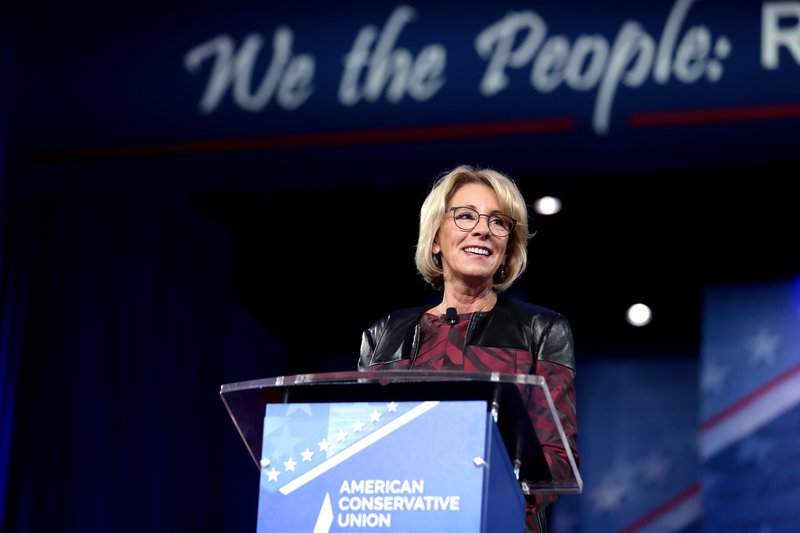 Yesterday, the Department of Education made an announcement about the nearly 100,000 borrowers who have been waiting at least a year for the Department to consider their borrower defense to repayment claims: A whopping 21,000 or so of them will finally get an answer. In total, the Department officially approved 12,900 claims for former Corinthian Colleges students, and denied 8,600. That news falls even flatter when you consider that it took nearly a year after Secretary DeVos took the helm of the Department, and the new formula will likely mean lots of former Corinthian students whose claims are approved will wind up with no relief at all.

The new formula works like this: The Department will obtain data on the earnings of borrowers who have submitted borrower defense (BD) claims, by program. (Less clear is how the Department will do this, and whether it will use individuals’ own earnings or an aggregate count.) Then it will compare those earnings to the average earnings for all the same programs at other schools that passed the gainful employment (GE) debt-to-earnings test. For instance, the typical paralegal graduate with a certificate earned around $33,000 in a GE-passing program. If the BD claimant’s earnings are less than half those of the average passing GE earnings--about $16,000, in this case--they will receive full relief. Above that, borrowers will get progressively less relief based on how close they are to the GE earnings amount, but not more than half of their debt will be discharged--a big cliff for a minor difference in earnings. A borrower within 90 percent of the GE earnings--around $29,000 or above--will get only 10 percent of their debt discharged--a marginal amount of, say, $1,000 off of a $10,000 debt originally borrowed.

But there are a lot of reasons that’s going to cause problems.

For starters, the Department of Education is changing its treatment of Corinthian Colleges borrowers midstream. Prior to January 20, close to 28,000 claims for Corinthian students were approved -- all of them for full relief. Around 60,000 more Corinthian borrowers remained prior to this week’s announcement, some of whom filed before the change in administrations and some of whom filed after.

But those unlucky enough to be reviewed after January 20, apparently, will get a substantially different--and less favorable--treatment. In other words, two students who attended the same program and were lied to in the same way by their school, and even who may have applied for a borrower defense claim on the same day, could wind up with vastly different amounts of relief. It could even wind up that the borrower processed before January 20 receives a full discharge for all amounts owed and amounts already paid, while the borrower processed afterward is granted a nominal 10 percent discharge of his total debt load. That’s simply unfair to similarly situated borrowers. And according to some, it’s not even legal.

The formula itself is also extreme in its application to borrowers. The benchmark for BD applicants is gainful employment earnings -- a universe of schools limited in many cases (by law) to other for-profit colleges, where post-college earnings are often substantially lower. GE data are also not designed to measure whether earnings are adequate; they measure whether earnings are adequate relative to the amount of debt taken on. The lowest-earning program in the GE data that also passes both the annual and discretionary debt-to-earnings ratios clocks in at an average of about $1,000 a year (for a textile manufacturing certificate). That’s right -- $1,092, thanks to nonexistent average debt loads at the school. GE doesn’t measure whether borrowers are making at least the poverty level, or even minimum wage. It is simply a measure of how tolerable the debt amount is at a school. So to get full relief under the Department’s new plan, a borrower from that program would need to be fully unemployed. If he were making effectively any money at all, he’d be capped at just 10 percent of his debt load -- even if the school had lied to him about, say, its job placement rate.

Ben Miller from the Center for American Progress pulled some quick data on Corinthian programs from the GE data file. At a Colorado medical assistant program from Everest, for instance, the average earnings of graduates were $17,000. Meanwhile, the average earnings of a passing program were about $18,000. So though the borrower was lied to by his school--and though the Department of Education has evidence about how widespread those lies were at that school between 2010 and 2014, and in that program--the most debt he will see forgiven is 10 percent. That’s hardly a consolation prize for someone making barely above the poverty level for a family of two, who wasted both time and money at a college that’s now widely recognized as having deceived tens of thousands of students.

In fact, the amount students would be expected to earn before they qualify for full relief on their loan is egregiously low in many, if not most, cases. While the Department’s investigation found one online Everest campus boasted a 92 percent job placement rate for those earning an associate degree in accounting, the actual rate turned out to be just 12 percent. The typical student who attended that institution took on over $10,000 in debt. But alumni of the program would need to earn as little as $12,000 a year or less to receive full relief on their loans--well below the typical amount for a full-time minimum wage worker.

And at Heald Portland, the Department found that the criminal justice associate degree program reported a 100 percent job placement rate--while excluding almost 60 percent of the program’s graduates from the calculation as “unavailable for employment.” But to have their loans fully discharged, former students would need to be earning about $13,000 per year or less. And if those students are working full-time in a minimum-wage job, they would be eligible to have not more than 50 percent of their loans forgiven, despite the egregiousness of the school’s misrepresentations.

All this is not to say partial relief is an inherently unworkable concept. There’s a huge diversity of institutional quality in the U.S., and certainly not every education will be so valueless that it merits full relief in the event of the school’s misdeeds. Yet it is difficult to argue that this framework gives borrowers a fair shake. Surely a student whose school lied about a job placement rate--off by a factor of nearly 10--shouldn’t have to be unemployed forever to warrant relief. In fact, given the egregiousness and scale of the problems at Corinthian Colleges, it’s hard to argue that a student in such a program warrants anything less than full relief.

The Department of Education can’t simply shirk its obligations to borrowers in the name of taxpayer protections--especially as it has delayed elements of the Obama Administration’s borrower defense rule that would have protected taxpayers by putting institutions on the hook for risky and illegal behavior. It has a responsibility to find a fair, reasonable, workable solution that repays borrowers for the harm they’ve suffered--in accordance with Congress’ intent. This plan falls far short of that responsibility.