Data from a survey of kindergarten teachers in California's Santa Clara County adds to the mounting evidence that kindergarten readiness is not as simple to define as you might think.

Contrary to popular conceptions of what it means for a 5-year-old to be ready for kindergarten, most kindergarten teachers are not wishing for rooms full of children who can already identify the letters of the alphabet. What they want instead are children who have learned how to regulate their impulses, follow through on a difficult task and have the self-control to listen to the teacher's directions for a few minutes.

This was one of several messages that emerged in Sacramento last Thursday during a presentation of recent data from the Santa Clara County Partnership for School Readiness, a collaborative of public, private and non-profit organizations in Silicon Valley. The presentation was part of the forum at which the New America Foundation released our report on early education in California. (For more about the report, see last week's post, the executive summary and the full report.)

Researchers for the Santa Clara County Partnership surveyed 36 kindergarten teachers in 2008, asking them multiple questions about what they believed entering kindergarteners should to be able to do in the domains of self-care and motor skills, self-regulation, social expression and kindergarten academics. Loretta Burns, director for the partnership, showed this slide at the California event to explain how these domains build on each other: 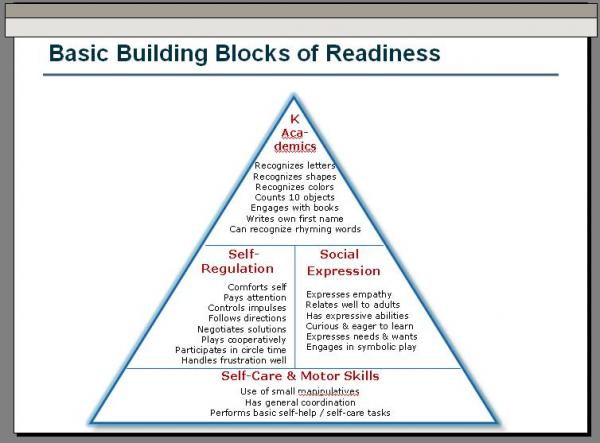 (If the slides are hard to read on your monitor, you may want to open the larger versions by clicking on the attachments at the end of the post.)

While kindergarten academics is at the top of the pyramid, most kindergarten teachers did not report that children need to come in with a strong base in academic skills if they want to have a successful kindergarten year. Instead, the teachers gave top billing to self-care and motor skills followed by self-regulation.

Teachers said that it was easiest to help students develop their academic skills and hardest to make an impact in developing their self-regulation skills. In fact, they said they had to spend the most time in the classroom focusing on self-regulation. This slide below tells the story: 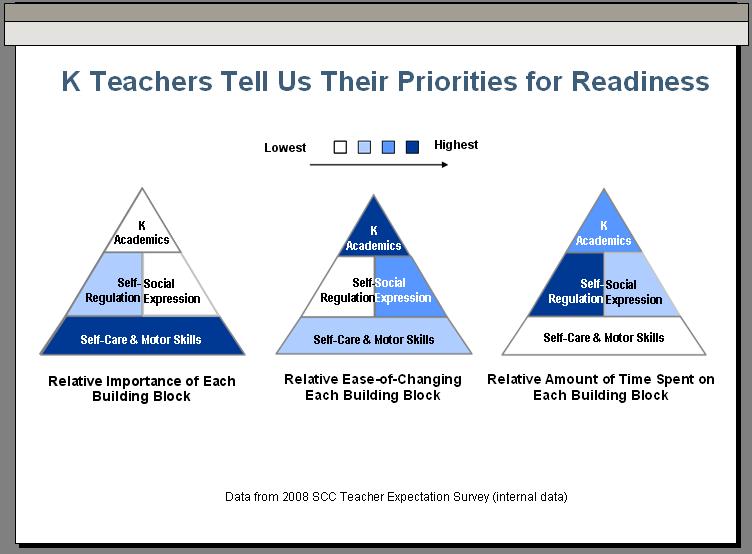 The slide also raises a key question: How can preschool and kindergarten experiences help children learn to self-regulate? Research on the importance of building self-regulation skills in young children has been accumulating over the past few years, and some of it is starting to zoom in on the significance of playtime, particularly pretend play scenarios that are child-led but feature teacher input. For example, the Tools of the Mind approach, which we've written about several times, incorporates pretend play in classroom settings and has been shown in scientific research to improve children's executive function and self-regulation skills.

Burns' presentation about the Santa Clara project was valuable on several other levels too. It provided a view of kindergarten readiness assessment that may help to dispel concerns about inappropriate testing of preschoolers. As Burns explained early in her presentation: "This is not about standardized tests for 4-year-olds."

The assessments in Santa Clara collect information from parents, teachers and observations of children in classroom settings. They are not used to determine where children should be placed or what schools they should attend, nor are they used to evaluate teachers or for other high-stakes purposes. The observations are done by trained teachers who look for signs of children's progress on multiple levels. Some examples of what they look for:

The appendix of Santa Clara's September 2009 report provides a sample of the observation sheet used for recording children's development in these and several other areas.

Santa Clara has been conducting these assessments since 2004, and the data is providing new insights to better prepare teachers for the children coming through their doors. Besides demographic and skill-based information, the data tells schools and teachers how many children are arriving with some experience in early learning environments like preschools and high-quality child care centers.

Collecting information like this is critical to ensuring that early education systems provide what children need. We hope that, as states continue to build out more robust and accessible systems of early learning for young children, well-designed and appropriate kindergarten readiness assesssments like this one continue to be part of the picture.