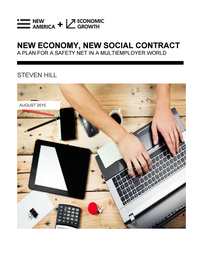 The US workforce, which has been one of the most productive and wealthiest in the world, is undergoing an alarming transformation. Increasing numbers of workers find themselves on shaky ground, turned into freelancers, temps and contractors. Even many full-time and professional jobs are experiencing this precarious shift. Within a decade, nearly half of the 145 million employed Americans are expected to be impacted. Driving this disturbing trend are U.S. businesses, led by those in the so-called “sharing economy,” which increasingly rely on an “independent contractor loophole” that allows an employer to lower labor costs dramatically. By hiring independent contractors instead of regular W-2 employees, a business can evade contributing to a worker’s health benefits, Social Security, Medicare, unemployment, injured workers compensation, lunch breaks, paid sick days and vacation leave, lowering costs by 30 percent or more. New app- and Web-based technologies are making it easier than ever to hire such “1099 workers,” which in turn threatens to eviscerate the national safety net.

In New Economy, New Social Contract Steven Hill outlines a fair, sensible and affordable way to create a new safety net for this new economy. Drawing upon what is already working in the U.S., Hill's proposal aims to allow workers with multiple employers to benefit from a fully portable safety net based on Individual Security Accounts and a greater degree of legal parity between the many different classifications of U.S. workers.

Correction: This paper has been updated to include an expanded definition of the multiemployer saftey net.