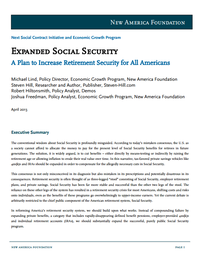 Executive Summary
The conventional wisdom about Social Security is profoundly misguided. According to today’s mistaken consensus, the U.S. as a society cannot afford to allocate the money to pay for the present level of Social Security benefits for retirees in future generations. The solution, it is widely argued, is to cut benefits – either directly by means-testing or indirectly by raising the retirement age or allowing inflation to erode their real value over time. In this narrative, tax-favored private savings vehicles like 401(k)s and IRAs should be expanded in order to compensate for the allegedly necessary cuts in Social Security.

This consensus is not only misconceived in its diagnosis but also mistaken in its prescriptions and potentially disastrous in its consequences. Retirement security is often thought of as three-legged “stool” consisting of Social Security, employer retirement plans, and private savings. Social Security has been far more stable and successful than the other two legs of the stool. The reliance on these other legs of the system has resulted in a retirement security crisis for most Americans, shifting costs and risks onto individuals, even as the benefits of these programs go overwhelmingly to upper-income earners. Yet the current debate is arbitrarily restricted to the chief public component of the American retirement system, Social Security.

In reforming America’s retirement security system, we should build upon what works. Instead of compounding failure by expanding private benefits, a category that includes rapidly-disappearing defined benefit pensions, employer-provided 401(k)s and individual retirement accounts (IRAs), we should substantially expand the successful, purely public Social Security program.

Under our proposal for Expanded Social Security, today’s Old Age and Survivors Insurance (OASI), commonly known simply as “Social Security,” would be retained, possibly with modifications, as an earnings-based defined benefit program. This would be renamed Social Security A. The expected shortfall in funding for promised benefits that is predicted to occur in the 2030s would be made up for by revenue increases, not benefit cuts.

To supplement Social Security A, we would add a universal flat benefit for all retirees eligible for OASI called “Social Security B.” Social Security B could be funded by revenues other than the payroll tax. Today’s Supplemental Security Income (SSI), a means-tested antipoverty program that helps poor children and the disabled as well as the elderly, has always been funded out of general revenues. SSI thus provides a precedent for expanding the funding base for Social Security B. Indeed, one option would be to convert SSI into Social Security B.

The two components of Expanded Social Security, Social Security A and Social Security B, in combination would provide a much greater share of pre-retirement income than today’s OASI does by itself for most Americans. This expansion of the public share of the average American’s retirement income would make both tax-favored employer-based pensions and tax-favored individual savings accounts less necessary, allowing federal tax expenditures for those private programs to be reduced or eliminated. Combining major reductions in tax-favored private retirement savings programs with a substantial increase in the public portion of the American security system would make the retirement security system as a whole more progressive, more efficient, and more stable. Designed properly, a new retirement security system could substantially boost public retirement benefits for most Americans without increasing the percentage of GDP devoted to the combined public and private elements of our nation’s retirement system as a whole.

Other reforms might achieve similar results by different methods. Any strategy that expands the reliable and efficient public share of retirement security in America would be an improvement over today’s system, which is biased toward the affluent and skewed toward private savings. Our purpose in proposing the Expanded Social Security Plan is to challenge the conventional wisdom about Social Security and to provoke a debate about whether and how to expand the public element of the American retirement security system. At present the discussion is dominated by those who want to privatize or shrink Social Security and those on the defensive who propose merely incremental reforms to preserve it. We seek not merely to move the ball, but also to move the goalpost in order to enlarge the boundaries of the national conversation about the future of retirement security in America.