One Person Plus Lots of Money Equals...Many Votes? 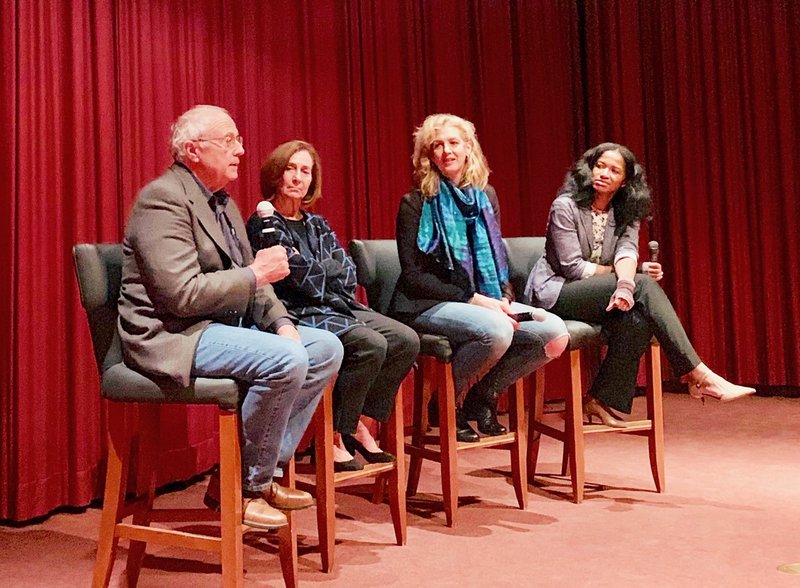 “There was $300 million in dark money spending in the 2018 election. What does this mean for democracy?” Nicolas Heidorn, 2018 New America CA Fellow

A critical part of our charge at New America CA is to help activate individuals and amplify the power of individual voice. What does it take to truly engage the public in the many decisions that impact their lives daily, and in some cases, fundamentally?

It is our belief that there are many ways to get involved, with the most foundational including our ability to elect representation within the government, so that government will indeed be for the people, by the people, and that our electoral processes adhere to the One-Person One-Vote rule. This rule refers to the statute that one person’s voting power should be roughly equivalent to another person’s.

This led to our great interest in screening and discussing the film Dark Money, which examines the influence of untraceable corporate money on our elections and elected officials. The film explores whether some American elections are being bought and sold and perhaps also whether this influx of large amounts of anonymous money prevents one person’s vote from having equal power to another’s.

On January 8th, New America CA and PBS Distribution hosted a screening of Dark Money that was, followed by a conversation with Ann Ravel and Gene Jarussi -- campaign finance experts interviewed in the film-- as well as with the film’s director Kimberly Reed. The discussion was lively and included recommendations from both panelists and audience members about what people can do to support fair elections, from grassroots activism to public campaign financing. After the event many attendees still had more they wished to ask, so we provided the opportunity to submit additional questions to our panel. Here’s what they said:

What has been the response to this film in small towns, conservative strongholds, etc.? How would you characterize the nature of the positive and negative reactions received in Montana and rural areas across the country?

The reaction to the film has been remarkably consistent around the US. I’ve had the opportunity to screen the film in the bluest of bubbles and the reddest of states, but everywhere we go we find theaters full of citizens who agree that there is too much money in politics, especially dark money. I haven’t heard one person say they think there should be more anonymous money fueling our politics, or that disclosing the source of funding is an abridgment of free speech. There are a handful of people who make the ‘freedom of speech argument,’ but I’ve only heard that from politicians who benefit from anonymous money, or the consultants who advise them on the dark money loophole. That thinking exists mostly at the federal level, where Republican leadership has made a consistent effort to weaponize dark money. But before we go blaming the problem on Republicans, it’s important to note that in the 2018 midterms Democrats spent much more dark money than ever before. To the original premise of the question, the common strain to audience response across the country is a desire to get rid of dark money, regardless of which party is benefitting from it.

C(4)s can collaborate as long as the collaboration doesn’t implicate coordination with the candidate or the candidate’s committee. The tax code is the law which permitted c4s to exist, so long as the majority of their activity is for social welfare purposes. If a c(4) were to do anything illegal, its tax status is potentially at risk. Unfortunately, neither the IRS nor the FEC enforce these requirements which means it is unlikely that a c(4) would be found to have violated the campaign laws.

I presume the only way to get rid of the c(4) organizations would be to change the tax code.

Christian LeFer and his wife Allison left the state of Montana and returned to Colorado. They have stayed in touch with some of the individuals that they helped get elected, but they have not been (to my knowledge) very involved with our elections. The Commissioner of Political Practices (COPP) makes every effort to keep watch for any possible involvement. The candidates are not the only ones to be held accountable. Currently the COPP is pursuing a case against the groups (National Right to Work, Montana Citizens for Right to Work, etc) which made the illegal contributions to the candidates.

Who are the groups working to uncover dark money and improve voter awareness? For example, there were a few websites to follow the money, but what happens after you follow the money? Are there other ways to be proactive on this issue?

At darkmoneyfilm.com we have a page titled Get Involved that we love pointing viewers to because it lists a wide range of organizations working for campaign finance reform. In addition to groups like New America CA, people can connect with our partners, and discover groups that advocate for everything from public financing to a Constitutional amendment to overturn Citizens United. For journalists or engaged citizens who want to #FollowTheMoney themselves, check out followthemoney.org and opensecrets.org. People can also watch our film or host a free screening for others.

I think that all any of us can do at the voter level is become informed, question the candidates about where they stand on dark money, and whether they support legislation to get rid of it?

There are a number of groups dedicated to changes in campaign finance: Legal groups such as Campaign Legal Center, the Brennan Center for Law and Justice, and Common Cause have many members and are well respected. Take Back our Republic is a conservative group working for transparency and reform. Voters Right to Know is a Bay Area group working to pass Constitutional Amendments in states to enshrine the right to disclosure of campaign finance in state constitutions, followed by legislation to require more specificity of the disclosure needed. Issue One is another well known group working with former US Congress members to enact legislation relating to Campaign finance.

In considering the long-term response to a deliberate strategy of voter suppression I appreciate the need to advocate for disclosure and make sure people get involved, but this seems to miss the importance of voters having the time & skill to discern bad actors. It seems that the dismantling of the public education system and incarceration of young people are all forms of voter suppression. Should investing in the voting rights activists and educators in communities of color be a large part of this long-term strategy to save democracy?

Voter suppression in many forms is a cause of people’s lack of trust in government and institutions, with the resulting low voter turnout. This voter suppression can be attributed to poor public education and the incarceration of young people, as you have indicated. It is also the result of the campaign finance court decisions which have permitted a small group of people to wield inordinately great power over public policy, leading people to believe that their votes don’t count. Voting rights advocates, educators, and community organizations which empower people, and encourage their participation in community and political life are essential, as is the need for a functioning and transparent government and campaign finance system

In the film there were many mentions of how complex campaign finance and specifically the Wittich case was. At the same time, John Adams [an investigative journalist featured in the film] drew several simple diagrams that seemingly described the issue well. You mentioned that it wasn’t until you started talking to people that you understood the complexity of the case. Was the complexity of this, and maybe other cases, less about following the money and more about proving collaboration, or both?

Commissioner Jonathan Motl and I estimated that by the time the Wittich case went to trial, we had reviewed 60,000 to 70,000 pages of material. Early on, we knew basically what happened--just like John Adams' sketch. But we had to prove it in a court of law. There is one trial scene where I listed the 8 corporations--National Right to Work, Montana Citizens for Right to Work, National Gun Owners, National Pro-Life Alliance, National League of Taxpayers, Western Tradition Partnership, etc. Linking all of these together (they were all corporations, some of them from Virginia and Colorado) so it was not easy. Then we had to prove that they worked (i.e. coordinated) together in terms of timing. We had to track down witnesses--they were scattered from Seattle to Virginia--and convince them to talk. Then we had to get their emails and fit them together. For example, Andrew O'Neill (he testified at trial, but is not shown in the film) knew all about the computer services offered, and Sara Arnold (shown in the film) knew all about the personal contact between LeFer and the candidates.

I could go on much longer, but basically you are right--we had to prove the coordination and then put a dollar value on it.

It seems to be in the interest of at least a subsection of capitalists to influence democracy, and it seems very easy to do that. In the end are capitalism and democracy really compatible?

Capitalism and democracy can be compatible, if there are checks and on the excesses and unethical behavior of corporate interests, and accountability to society for their actions

We’d love to hear your thoughts on these questions and answers, as well as how you plan to get involved. Tweet comments with @NewAmericaCA #DarkMoneyConvo, #Activatedpublic, #OnepersonOnevote.