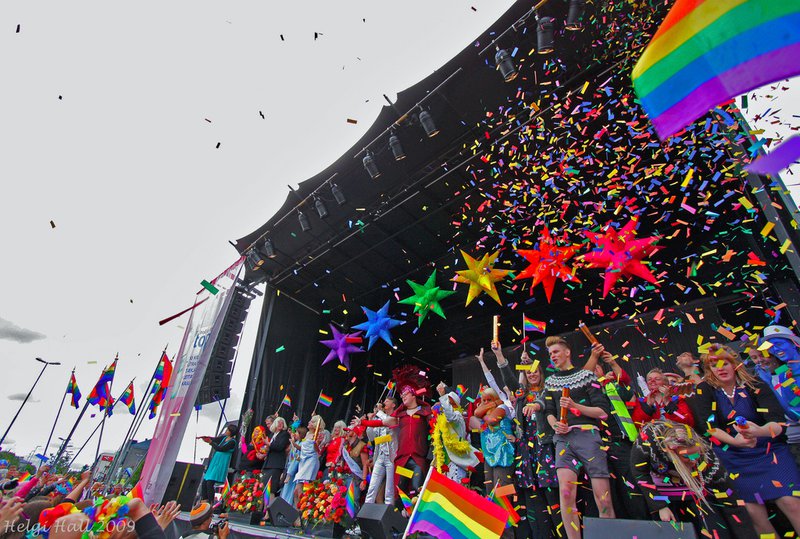 Another year, another confetti-filled flurry of Pride Month celebrations—meaning that talk of representation is on the tips of many tongues in queer communities.

And for good reason: For many decades now, LGBTQ people have largely been represented in pop culture by straight people. Just take a look at queer icons like Britney Spears, Cher, and Madonna. Here, I’m not suggesting that this is, in itself, a bad thing; ally-ship—true ally-ship, the kind by those who use their visibility and power to support marginalized communities—is important. Still, it’s dispiriting that, when it comes to representation, we see queer folks in some areas but not in others—as the choreographers and makeup artists behind the stage but never on it.

Despite the not-insignificant strides made by the LGBTQ community in recent years, it’s key to take a hard look at the work to be done—and that includes seeing a necessary pivot in the cultural conversation about what it means to see people who like like us.

I remember growing up here in Brazil and not seeing anyone like me portrayed on TV—or at least, not anyone with a similarly complex inner life. The few times I saw gays on TV, they were always a punchline in a comedy—a source of laughter. Many people, I’m sure, are probably thinking: It’s just a joke, right?

It’s impossible to overstate the power of being able to identify with a public figure, particularly when that figure is actually seen in the fullest sense. As Michael Morgan, a former professor emeritus at the University of Massachusetts at Amherst and a researcher on media effects, told the Huffington Post earlier this year, “When you don’t see people like yourself, the message is: You’re invisible. The message is: You don’t count. And the message is: ‘There’s something wrong with me.’” He continued: “Over and over and over, week after week, month after month, year after year, it sends a very clear message, not only to members of those groups, but to members of other groups, as well.”

Of course, the landscape isn’t all doom and gloom. Thanks to the many possibilities opened up by the Internet and other forms of social media and technology, there are now more opportunities for LGBTQ people to gain visibility. Queer artists have found a place to express their ideas and perspectives on platforms like YouTube, Facebook, and Twitter.  For instance, Liniker, a non-binary Brazilian singer, rose to fame after she posted a video called “Zero” on Facebook that allowed her to attract a dramatically wider audience.

Yet talk of queer representation and its importance is still all too often kicked to the fringes of our broader cultural conversations. And even when it does feature in those conversations, it isn’t necessarily immune to the same sorts of corrosive conceits propped up by straight people. Some people within LGBTQ communities in Brazil are themselves misogynist and homophobic. The macho look (think Ricky Martin) is still very much praised within queer circles, as are certain stereotypes around femininity. It isn’t uncommon for people who don’t fit these tropes to face resistance in a way that breathes life into a culture of already stifling gender norms.

While Brazil, like any other place, is beleaguered by problems of queer representation, it might also provide a blueprint for improvement. Here, a group of artists within the LGBTQ community is gaining traction in the media. The likes of McLinn da Quebrada (whose name is a play on the words “beautiful” and “broke”), Liniker, Pabllo Vittar, and many others are doggedly questioning the limits of gender, putting into perspective not only gay lives, but transgender and gender non-binary ones, too.

One of my favorite artists, da Quebrada, is a self-declared bixa preta da favela—a black queer woman from the slums—and she’s taking to task the rigid boxes around gender through her protest songs and transgender aesthetics. With almost aggressive lyrics and straightforward music videos, da Quebrada is pushing herself—and the rest of us as well—to re-conceptualize what being a woman means, particularly being a trans woman. Moreover, her songs often nod to race and class, bringing center stage the concept of intersectionality, or that, for many people, identities are indelibly intertwined.

Given the current state of world affairs, it’s easy to view this pop culture crisis as insignificant. Brazil’s president is being scrutinized for yet another scandal. And indeed corruption and fascism are on the rise all across the planet. In these tenuous times, it seems, at best, frivolous to care about who’s representing whom. And yet, what we’re talking about here isn’t merely entertainment—at issue is how the rich tapestry of experiences long enjoyed by queer people continues to be dismissed.

This is about equality and inclusion in the broadest sense. And that’s a conversation worth demanding year after year—even after the confetti of Pride has settled.