What Can We Learn from the Grand Débat's Grand Ambition? 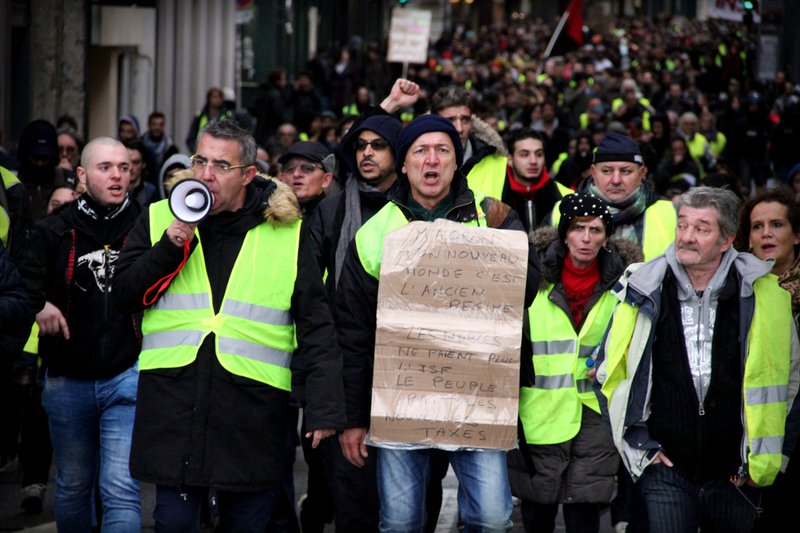 This Sunday marks the one-year anniversary of the first Yellow Vest protest—a movement that made international headlines when 283,000 citizens marched across France to protest a diesel tax increase. After twelve months of violent protests, the movement slowed. While part of this was due to the inherent difficulty of maintaining momentum (and French President Emmanuel Macron’s decision to scrap the offending tax and announce a 10 billion euro stimulus package), another, more interesting tactic was what he tried next: an exercise in massive, nation-wide civic engagement.

Called the Grand Débat—a huge listening tour where the government solicited and collected citizen complaints—Macron’s gambit has diverted some of the anger toward civil town halls. So, on the one-year anniversary of the first protest, how well did his civic engagement strategy work—and what lessons can the United States take away?

France is, of course, no stranger to protests—including violent ones. But from the beginning, the Yellow Vests were unique for being effectively leaderless. The movement began on social media, but the protests weren’t coordinated by one specific organization or united by any shared ideology. The Yellow Vests also didn’t align with any party, despite the efforts of both far-right politician Marine Le Pen and far-left politician Jean-Luc Mélenchon to leverage the movement.

Ultimately, the Yellow Vests fundamentally rejected the establishment—perhaps because they felt so profoundly forgotten by French elites. After all, the movement represented not the poorest segment of the French population, but rather, the rural and low-income citizens who make too much to qualify for social benefits, but not enough to get by. It’s a social pattern very familiar to Americans.

As an anti-establishment movement, the Yellow Vests didn’t have formal demands. Some were concrete: lowered cost of living, expanded public services, and reinstating the wealth tax. Others, however, were existential: The Yellow Vests opposed representative power itself, not just those who currently held office. Many had a deep lack of faith in representative democracy and its institutions.

Thus, Macron implemented what Bernard Reber, a senior fellow at France’s National Center for Scientific Research, called an “unprecedented” solution. Between mid-January and mid-March of this year, the Grand Débat encompassed 10,134 local meetings, 16,000 local complaint books, and almost 2 million online contributions, addressing four themes: the ecological transition, taxation and public spending, democracy and citizenship, and state organization and public services. Almost 2 million people participated, by the Grand Débat guarantor council’s estimate. Macron himself attended many local meetings, speaking with and listening to citizens for hours. And while this may not seem unusual to the American eye, France, writes Atlantic staff writer Rachel Donadio, “lacks the American tradition of town meetings.”

The program strove for accessibility: If citizens weren’t able to attend events, they could submit complaints via an online portal or through mobile desks in town halls, train stations, and post offices. It also, Reber noted, conducted mass citizen outreach—including randomly selecting citizens to attend regional conferences, with compensated travel (one attendee was the effort of an approximate 19 outreach calls on average).

Overall, the Grand Débat itself was an innovative experiment in civic engagement and democracy. Translating that into concrete policy, however, is an entirely different challenge.

The government tried to keep expectations low, emphasizing that the debate couldn’t satisfy everyone—after all, the massive scale of data collected was itself prohibitive. In April 2019, 61 percent of respondents to a YouGov poll said they didn’t believe the debate findings would actually impact government policy. When Macron announced new reforms on April 25, 68 percent of survey respondents were dissatisfied.

Some of these problems may stem from the program’s structure. While the debates included a panel of guarantors, a transpartisan oversight committee, and a monitoring committee, the government’s and Macron’s involvement led some critics to feel it was an impartial process centered more on retail politics and campaigning than civic engagement. (It didn’t help that Macron’s En Marche party was preparing for the upcoming European Union elections.) And despite efforts for inclusivity, the participants represented another elite: 65 percent were highly educated, 75 percent were homeowners, and over 75 percent were above fifty years old.

As Donadio communicated via email, the debates were ultimately a way for Macron “to do what he does best: talk anyone under the table.” To her, “The Grand Débat was a success for Macron in that it got him closer to the people. But Macron's critics still don't feel that their voices have been heard.” Still, Reber explained in a phone interview that the debate also offered citizens something extremely unusual for most civic engagement processes: the ear of someone with real power.

The remaining challenge is simply an incontrovertible reality of democratic engagement. While democracy can offer space for powerful public debates, policymaking in practice can’t satisfy everyone invested in the outcomes, especially when there are real trade-offs on the table. The Yellow Vest movement left Reber with an essential question: “How do you connect participatory experiments with representative democracy?” After all, citizens may struggle to translate their lived experience into concrete national policy solutions—and representatives may not see or understand their complaints. It’s no wonder, then, that some Yellow Vests championed an entirely new “bottom-up, direct democracy of permanent popular decisions by referendums.”

For Americans, one answer may lie in improving the process—especially when the grievances are this existential and anti-establishment.

New America Political Reform fellow Hollie Russon Gilman’s new book, Civic Power: Rebuilding American Democracy in an Era of Crisis, argues that democracy reform must “expand the ability of citizens themselves to mobilize, to organize, and to advocate for their views.” As Macron has learned, the goal “should be not to optimize a policy process for efficiency, efficacy, or consensus,” but to “facilitate a productive form of contestation and disagreement.” From that perspective, the debates are more likely to produce “thin” civic engagement—a one-off participatory event that doesn’t translate into the kind of long-term civic infrastructure that would actually challenge the current “structural crises of exclusion and inequality” in America.

As Gilman and her co-author, Demos president K. Sabeel Rahman, argue, U.S. cities and localities are uniquely positioned to attempt these grand civic engagement experiments: National leaders like Macron may have a harder time addressing citizens’ complaints than a mayor or local public official would. These innovations could take the form of citizens’ councils, community-level monitoring, participatory budgeting efforts, inclusive uses of civic tech, or new units within City Hall.

As a process, Donadio said, the Grand Débat was a way to “diffuse social tensions and address constituent issues” outside of elections. Macron, she explained, has a “tendency to see politics in the abstract—as policy challenges and not necessarily things that affect living, breathing citizens”—and the Grand Débat helped build some of the ties that had been missing between him and the French people.

This is especially critical for Macron. The French system of holding legislative and presidential elections simultaneously means that, while Macron will have a “rock solid majority” until 2022 and will be able to pursue his agenda without meaningful opposition, he won’t necessarily have the public’s support. Cue the Yellow Vests.

And Macron’s troubles with protests aren’t over: Public-sector and transit workers will strike on December 5 over pension reforms, which may last at least through Christmas. It remains to be seen whether a recently-launched version of the Grand Débat—this time focused on pension reform—will help quell tensions.

Beyond the French system, it will be increasingly important for local, state, and national democracies to help marginalized, vulnerable and under-resourced populations feel heard outside of the traditional election cycle. As Reber noted during our conversation, the Grand Débat was a good reminder of what’s possible. But, as always, the experiment of democracy hinges on turning what’s possible into policy.