The United States of Coding 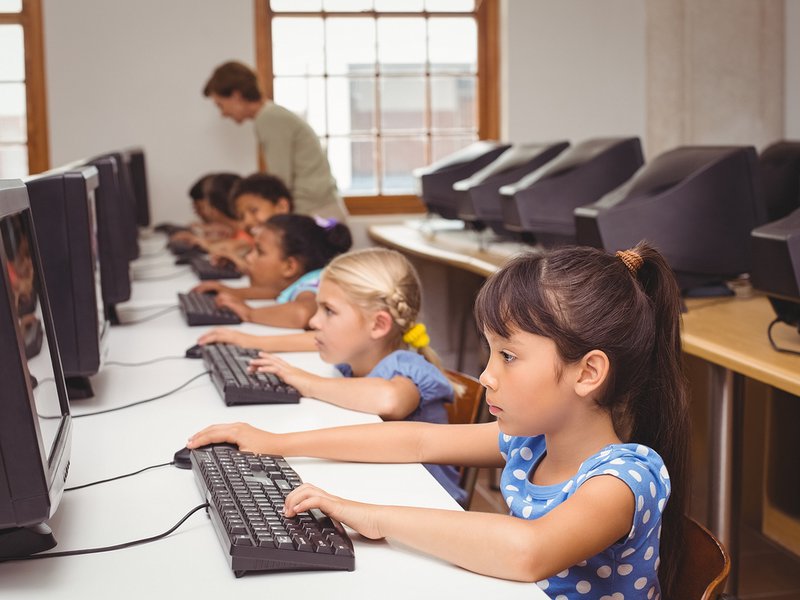 Let’s say you grab your phone book (let’s first pretend you’re still using a phone book) to look for someone with the last name Robinson. You open the book roughly to the middle and are in the M’s. You grab the latter half and break that in half and find yourself in the U’s. Now you have a smaller sample to work with—M through U. You continue this recursive search until you land in the R’s.

Your logic is that of computer science. It’s a logic that calls for constant debugging: reducing complex systems into smaller ones, finding related issues, and resolving a solution. And it is a logic that is increasingly necessary for today’s students and future workforce. Which raises the question: Why aren’t we teaching more of it?

To put it very simply: computer science (CS) is the future of the job market. By 2024, there will be a projected 4.4 million jobs in computer and information technology occupations. That’s a 12 percent growth rate from 2014, a rate outpacing that of all other occupations. Computer-oriented jobs are also the number one source of all new wages in the US and are demanded four times more than any other occupation according to Cameron Wilson, COO and VP of Government Relations for Code.org. It is not a coincidence, then, that CS majors are the number one major hired by volume and the second highest post-undergraduate earners. And these jobs don’t stop in the technology sector: two-thirds of tech jobs are outside the industry. It is hard to think of any field that doesn’t have an increasing need for technology and computational thinking. And what is the K-12 education system doing to prepare a future workforce capable of taking these jobs?

Not enough. According to a Gallup survey, one-half of K-12 principals believe that their schools teach CS, but only one-half of those have courses include programming and coding, which is to say that only one-fourth of schools offer CS classes. The other half teach basic computer literacy skills or how to use a computer, which is a computer class, not CS. But school administrators’ lack of understanding of what constitutes CS is only part of the problem: Just over half of the U.S. states consider CS courses worthy of high school graduation credit, which inhibits students who may be interested, but who don’t have space in their schedule for additional electives. Even before that point, many elementary and middle schools find it difficult to fit in science courses because their curriculum tends to focus more on reading and writing. While these should stay a priority in early education, coding could help children find confidence in their other strengths. Abigail Swisher, a former teacher at a STEM magnet elementary school (and my colleague), recognized that many of her students who struggled with reading or writing excelled at coding.

Whether CS courses are offered is another issue, and not a small one: only 15 percent of high schools offer AP CS courses. Where and to whom they are offered is a problem, too. Barbara Ericson, Director of Computing Outreach at Georgia Tech’s College of Computing, said in an interview with the New York Times that, of the schools that do offer AP CS, it is most likely to be in schools in wealthier communities.

In 2013, there were 11 states where not one Black student took the AP CS exam and 8 states where not one Hispanic student took the exam. Of the students that can take AP CS, only 22 percent are female and only 13 percent Black or Hispanic. To put this in perspective, that means that, if females and minority students were to participate at the same rate as white and Asian male students, the number of AP CS exam-takers would increase by over 130 percent.

Schools that choose not to offer CS are contributing to the diversity gap. And the schools that do offer it can, intentionally or unintentionally, gear their classes to a particular demographic, also contributing to this gap. The stereotypes of technology are enforced early and can even come from teachers. Economists Victor Lavy and Edith Sand conducted a study in which they followed children from 6th through 12th grade. The study found middle school girls tended to outscore boys in math when the exams were graded blindly. Yet when the teachers were aware of the test-taker’s gender, the boys tended to outscore the girls. The teacher’s bias discouraged many of the girls from pursuing advanced courses in high school. And the problem doesn’t start or end with school teachers. After-school CS programs have to be sought out, and many come with a steep fee, lessing the diversity of participants.

To not change the educational emphasis around CS, then, is to continue a discriminatory (and, given how many of these jobs need to be filled, economically disadvantageous) system. The logic and problem solving skills need to be introduced as early as kindergarten, integrating informal learning and technology engagement. Introducing coding should come shortly after, like the courses Code.org, a leading nonprofit in K-12 CS education, offer beginning at the age of four. Coding should continue through middle school so that, when students begin high school, they have an acute awareness of what CS is and why it is beneficial. Finally, if all states began crediting CS towards high school graduation, they would likely see a large influx of students. Just last year, Maryland began crediting CS towards graduation and saw more students, especially girl and minority students, enrolling. They currently have the highest number of Black students.

And there are many current efforts to widen the accessibility of CS, from nonprofits to some federal action. Code.org offers K-12 curriculum, teacher training, and is lobbying for more states to credit CS towards graduation. CS10K has made the commitment to partner with other companies to train 10,000 teachers for in-depth CS courses. Other nonprofits like #YesWeCode, Code2040, Black Girls Code, and Girls Who Code create opportunities for underrepresented students to explore CS.

Technology companies, too, have seen the importance of early action. Google has partnered with organizations like Boys and Girls Club of America for the CS First program, providing youth with CS opportunities. Encouraging the intersection of art and technology, Cartoon Network plans to add shows and characters to reflect diversity of STEM and offer free coding tutorials featuring these characters. Microsoft, Facebook, Apple, Salesforce, Qualcomm, and Oracle have all committed to invest in different CS education efforts. The efforts of these companies are clear investments in their future employees.

States have also been taking action. Specific plans are to take place in Virginia, Illinois, and Hawaii to grow CS integration and accessibility. Success stories have already come from Arkansas, which has seen a 300 percent increase in females and 600 percent increase in Black students enrolled in CS courses, and the previously stated Maryland.

But there are still 22 states missing from an easy step of rising participation. In the past six years alone, 19 states began crediting CS towards high school graduation. Do we really want to wait another six or more years to see the kind of success that they have?

That is why many believe there needs to be federal funding to help these states gain teacher training and resources to provide quality courses. The National Science Foundation has committed $120 million over the next five years for the development of instructional materials, teacher development programs, and resources. This past January, President Obama announced the CS For All initiative with a $4 billion dollar budget that would be granted to states who present a proposed curriculum and plan of action for CS education. 27 state governors and many business leaders even signed a letter to Congress addressing the need for greater access to CS in K-12 education. Yet the House and Senate approved 0 percent of the President’s budget. The House did recommend $1 billion for Student Support and Academic Enrichment State Grants, in which awarded states and districts will have the choice where they invest the money, one suggestion being STEM programs. But mere suggestions are not enough, and there needs to be specific demands for K-12 CS education. Educational institutions don’t always respond quickly to market incentives, like the ever-increasing CS job demand, and so they need encouragement from federal and state funds to invest in the education of the future workforce of computing, one representative of our population.

Technology is incorporated into almost every aspect of our world and is only growing. It is time for students to be able to understand how it works and produce it, not simply use it. All students should learn and be able to put to profitable use the logic of computer science—and not just when they’re thumbing through phone books.