Sink or Swim: the Case for Passports for the World's Refugees 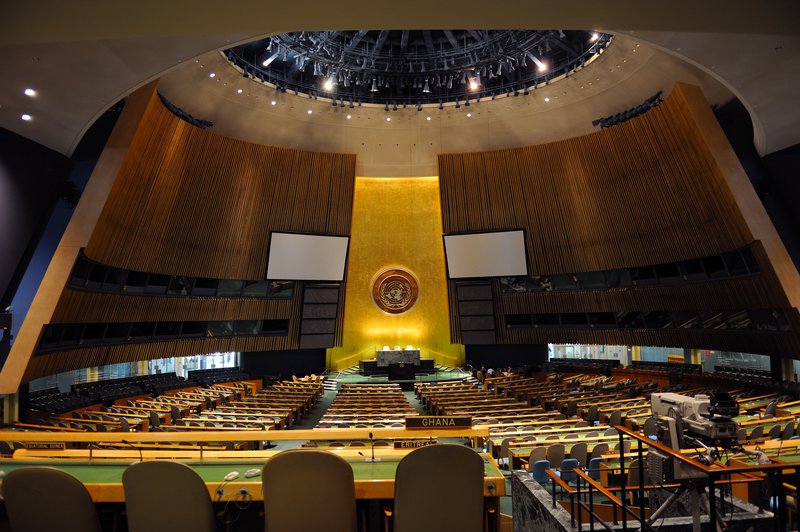 As the 70th UN General Assembly opens in New York this week and the fate of millions of refugees hangs in the balance, much is in question. How will the UN address the refugee crisis? Will anyone in attendance speak for the refugees? Will the septuagenarian world body recognize the need to rethink its global refugee laws and practices? One thing, however, is all too clear: Unless we are prepared to consider radical reform of the 1951 Refugee Convention, the consequences will be dire—both for the refugees and for the countries struggling to manage their influx.

This week, Pope Francis (who is scheduled to address the UN later this month) warned that the refugee crisis we have witnessed thus far is merely the “tip of the iceberg.” And the problem is not confined to Europe, where the hundreds of thousands of people now packing highways and train stations have finally managed to attract to the crisis the media attention it deserves. In the United States last year, the federal government was completely overwhelmed by the sudden influx of an estimated 80,000 children fleeing violence in Honduras (a number that could rise to an estimated 130,000 this year, according to human rights groups surveyed by CNN).

The refugee problem, then, is global, not regional. And it will not be solved by country-specific quotas. Only a rapid effort to revamp global refugee laws will permit a peaceful and managed transition from chaos—and the xenophobia and violence it can generate—to a semblance of world order. People tend to radicalize when they are stuck in the status of “refugee.” Consider the case of the Palestinians. The fact that even Arab countries kept them confined in camps for years has only exacerbated the intractability and seemingly endless cycle of violence in the region. The management of refugees must be considered a matter that has huge consequences for war and peace across the globe.

Over the next few years, success will likely be a function of whether top international bureaucrats can learn lessons from the past. A crisis very similar to the present one emerged after World War I, when millions of Russians who had fled war and revolution in their homeland were stranded in Western Europe. Some 800,000 Russian refugees became stateless when Lenin revoked citizenship for all Russian expatriates in 1921.

It took a man of extraordinary vision and leadership to convince the world that the obvious solution was to offer them new passports. Since no single country could take them all in, Fritjof Nansen, the famed Norwegian Arctic explorer turned humanitarian activist, proposed a revolutionary idea: that these refugees be given international passports. These documents, first issued by the League of Nations, became known as the Nansen Passports. They allowed refugees to settle in a variety of Western countries to find work and a new future. European countries did not lose their identities; they gained in cultural diversity. In 1933, the arrangement was broadened to also include Armenian, Assyrian, and Turkish refugees. In 1938, Fritjof Nansen was awarded the Nobel Peace Prize for his efforts, which he had made not for a prize, but for international safety and security for all.

The current crisis is rooted in our global institutions’ failure to learn from either the negative or positive experiences of the past. As the Syrian civil war began producing record numbers of refugees (over four million by the latest UN count), the UN Security Council’s strategy was shortsighted. The UN barely allocated enough money to the UNHCR to keep the millions of refugees pouring into Turkey, Jordan, and Lebanon confined to camps. The UN refugee agency is overwhelmed and cannot register and process the refugees fast enough to allow legitimate asylum seekers a glimmer of hope. The situation is replicated in Libya and Egypt, from where millions are expected to seek passage to Europe soon. The provision of tents, water, basic food rations, and color crayons for the kids is a far cry from what the most destitute refugees in the world really need, which is a chance at building a new future for themselves.

National governments were mostly not in a hurry to increase the UNHCR’s capacity to offer asylum-seekers proper travel documents because they didn’t want to make it easier for them to show up at their border. The result has been an exponential growth in smuggling networks. (It should also be said that most refugees are actually middle class people who had enough money to pay the high fees demanded by smugglers and are asking not for handouts, but for the chance to earn a living). These smugglers offer European countries something far worse than documented asylum-seekers. Now faced with hordes of unregistered masses clogging up ports and train stations and highways, they are forced to contend with the clear and present danger stemming from terrorist networks’ exploitation of the phenomenon to infiltrate operatives into Europe. In the past month, the CIA confirmed that ISIS has used chemical weapons against Kurdish positions in Syria. How easy will it be for terror networks to smuggle canisters of chemical agents into European capitals if the authorities have no way of targeting smuggled migrants without treating many legitimate refugees as criminals?

Further, our unwillingness to provide proper papers has resulted in refugees’ distrust of legitimate documentation. Last week, half of the refugees who had boarded a train to Denmark refused to let authorities fingerprint them and register their names for fear that they would simply use the information to track them and send them back to the hell-holes they had spent their life savings and risked their very lives trying to escape. The reality is that, without a renewed effort to give refugees a chance at legitimate migration, and to create an environment in which they can be fingerprinted without fear of deportation, world governments will make their own populations less safe, stoking both social and cultural tensions and making it impossible to tell refugees apart from criminals and terrorists.

Refugees need and deserve real passports. If we treat people like cattle, we lose their trust, stoke their resentment, and empower extremist groups that have done a fine job so far of recruiting from among the masses of destitute people across the region.

After the First World War, a charismatic visionary like Nansen was required to offer the bold yet simple solution needed to avert disaster. As the General Assembly meets in the coming days, we must hope that his example will be honored. UN Secretary-General Ban Ki-moon, and Mogens Lykketoft, the former Speaker of the Danish Parliament who will preside over this year’s general assembly, must rise to the occasion and use Nansen’s example as an inspiration to push world governments to take the radical measures needed to cope with the most critical challenge of our time. For in the end, the UN is in the same boat as the refugees it is tasked with assisting. The world body must live up to the challenge. If it does not, global conditions will require changes far more dramatic than passports for people who need them.