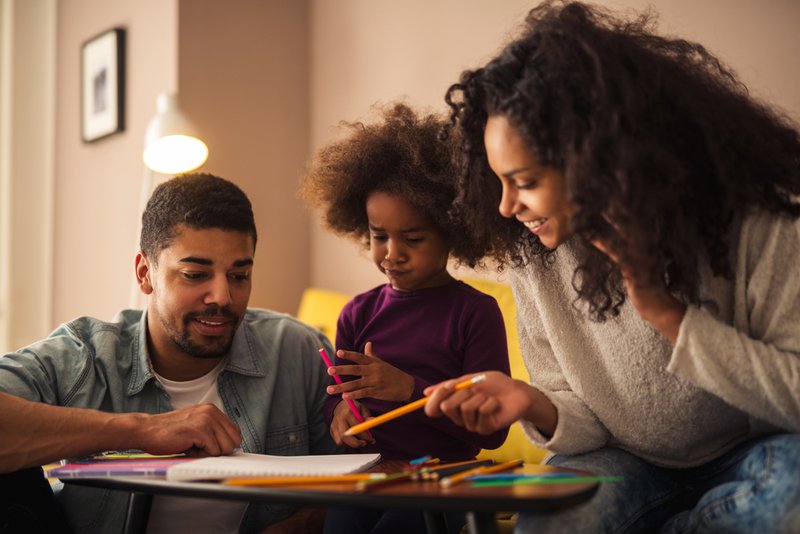 I was driving through the town of Alameda the other day and passed a giant ad for "single family homes." I contemplated how the ad so clearly tied together the dream of homeownership with the American ideal of family. And then I thought about all the beautiful families I know who do not fit that ideal. Like my friend who, with his wife, just bought a home where they are raising their child and where his elderly father will spend the end of his life. And my daughter’s friend and her little brother who live with their parents during the school week but with their two great aunts and cousin on weekends and summers. And two single mothers I know who moved in together to raise their kids and share expenses. These families and so many others would not fit in a “single family home.”

Home design is among the many subtle and not so subtle indicators of cultural norms that tell us what the ideal family should look like. But more families—through choice and circumstance—are creating families in ways that don’t match up with the nuclear family ideal. In post-World War II America, marriage rates have decreased and more children are born to unmarried parents. Today there is no one family form in which the majority of kids grow up.

These shifts are not only not bad, but they make sense when you put families in their historical context. Family forms in America have always shifted with the times. While American values have been holding on to a family ideal that was only briefly the norm and was never an option for everyone, Americans themselves have moved on. None of these emerging family forms are really new; they are just becoming more prevalent.

And with good reason. It is incredibly hard for two working adults to do their paid jobs, raise kids, manage a household, nurture a marriage, and take care of themselves without the support of additional adults. Further, as women have increasingly gained financial independence and our beliefs about women’s roles have shifted, marriage has declined. As people, with millennials in the lead, continue to push the boundaries of family formation, we would do well to look to the communities who have histories of creating family outside the constraints of the nuclear family for inspiration, guidance, and perspective. Immigrants and LGBTQ communities come to mind. Additionally—and while it may be surprising to many—when it comes to inspiring examples of  paradigm-shifting family formation, African Americans have been trailblazers for hundreds of years.

America has a tradition of creating racist stereotypes despite having experienced the evidence to the contrary. (Who else has stolen millions of people and forced them to work for free and then stereotyped them as lazy?) So perhaps it’s not surprising that Black American families have been castigated as broken and dysfunctional despite the obvious strength of our commitment to family and the expansiveness of who we consider family. From slavery to Jim Crow to forced migration to the prison system, America has created systems of terror and subjugation that in consequence or intent obstruct Black people’s ability to build and stay connected to family. And in response, we remained steadfast. During slavery, people ran away to find family who had been sold away; walked miles on their day off to visit loved ones; and worked extra hours to earn money to buy the freedom of children, spouses, and sibling. When the Freedman’s Bureau was established after the Civil War, they received thousands of letters from formerly enslaved people looking for family they’d been separated from. Today, a disproportionate number of Black people are represented among the prison population, and Black people (primarily women) organizes bus rides for families to travel—often many hours—to visit loved ones who are locked up.

Black people in America have a long tradition of blurring the lines between family and community and including in our families people to whom we have no blood or legal ties. Enslaved people were not allowed to legally marry, and the only legal recognition of family was that of children born to women whose status as enslaved people meant their children too were considered slaves. But that didn’t stop people from creating romantic partnerships and committing lifetimes to each other. I have no brothers or sisters, but my children have a lot of aunties on my side of the family who lavish them with the attention and permission for exploration that my husband and I don’t provide. I’ve found that a common experience among Black adults is finding out that Aunt Flo or Uncle Darell are not mom or dad’s siblings. And the families I know who have taken in and raised children, or cared for elders, from the community are too many to count.

I am not denying the very real damage that has been done to Black families in America because of long-lasting systemic racism and sexism. We have experienced untold suffering and pain when it comes to our families as a consequence of slavery, Jim Crow, forced migration, the prison industrial complex, etc., etc. But in the face of all of that, our commitment and creativity when it comes to family is undeniable. From the amalgamation of ancestral family ways and violent oppression, Black Americans have conjured deeper and more vast pathways for loving and caring for each other. Instead of casting Black families as broken, America should sit at our feet and learn from us.

While we don’t often consider it, most of us will move through several different familial configurations in our lifetimes. Because of circumstance or choice,we may find ourselves as single parents, step-parents, married, divorced, re-married, or widowed. We may resist the social pressure to either marry or raise kids and seek to create a close-knit community. We may expand our families with the addition of friends or neighbors.

What kinds of families would each of us make for ourselves if we were free to choose knowing that there was room and real support for the kinds of families that made sense for us?  What if we disaggregated the roles we attach to family, and marriage in particular, and thought of it as something more flexible and fluid? What if we accepted that what we need in our 20's is not necessarily what we’ll need in our 50's? What if a spouse didn’t have to be a romantic partner, roommate, co-parent, and best friend all in one person?

Maybe the only through lines in any of our family configurations are love, connection, and support from people from whom we can ask for what we need and who are happy to give it, and for whom we do the same for in return. This is not as far a stretch as it may seem. Over the last decade, I’ve had dozens of conversations with people across a spectrum of classes, races and ethnicities, genders, and family structures. When I ask them what family means to them, no one says legal recognition of the state or biological connection. Everyone talks about love, care, and people who have their backs.

This is a world we can create. This is the world I want to live in. So I’m inviting you to contemplate this: If you could throw out all the conventions and constructs and limitations of our current understanding of family, what would you create for yourself? And what’s stopping you?