Sarah McBride: 'Even If We No Longer Have a Friend in the White House, We Can Still Open Hearts and Change Minds' 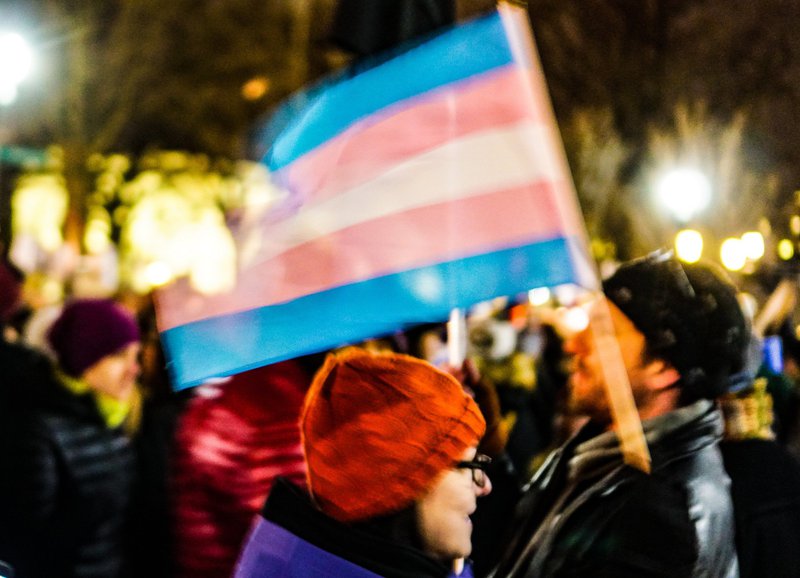 2016 was a banner year for transgender visibility. On the final night of the Democratic National Convention, before Hillary Clinton spoke about becoming the first female presidential nominee to address a major party convention, another woman made history on that stage: then-25-year-old Sarah McBride became the first openly transgender person to speak at a national party convention.

“My name is Sarah McBride, and I am a proud transgender American,” she said. “Today in America, LGBTQ people are targeted by hate that lives in both laws and hearts.” Part of what has made McBride, who came out as transgender several years ago while she was the student body president at American University, such an indelible part of conversations about equality in the almost year since she spoke at the DNC is her ability to reflect personal lives. Her work hinges on narratives peopled by, well, people—transgender people—and she adds nuance, texture, and, ultimately, knowability to lives that are all too often seen, and maligned, as otherworldly.

I sat down with McBride to talk about the unique challenges facing the transgender community, her work as the National Press Secretary of the Human Rights Campaign, and what lies ahead for progressives looking to push back against an administration actively unraveling the gains of transgender people over the last decade. A lightly edited transcript of our conversation is below.

When you spoke at the Democratic National Convention last year, you became the first transgender person to speak at a national party convention. Could you explain why this was such a crucial moment not only for you, but also for the whole country?

The convention was an incredibly powerful moment for me. The reality is that, for so long, transgender people have been invisible within larger political debates. Growing up, the only instances where I saw myself or people like me portrayed on, for instance, television were either as a punchline in a comedy or as a body in a drama. So to be able to stand on that stage in front of an arena full of people on national television and to declare that I am a proud transgender American was an incredible experience to be a part of, certainly on a personal level.

But also, I hope that moment provided hope and comfort and security to transgender people across this country who are wondering whether the heart of this country is big enough to love them, too. I hope it showed young transgender people—whether in Delaware or in Kansas or in California—that they can grow up and pursue their dreams, and that they’re going to have millions of people who see them and who love them and who are fighting with and for them.

I think that’s what the experience of the convention exemplified, and I hope it’s just one part of a larger move toward transgender people’s being seen by and visible to American society.

Do you have stories about how your experiences have changed over the past year?

There’s been a shift toward more transgender people coming out and changing workplaces and schools across the country—because we know that when you know people’s stories, it becomes much harder to discriminate against them. When you know someone who’s transgender and you’re exposed to his or her story or life, whether in person or not, that knowledge and that familiarity can create an incredibly powerful ally among so many cisgender folks.

And you know, for me, too, the most powerful experiences I’ve had since the convention have been going around and meeting the families of young transgender people and hearing about their journeys and, in some instances, finding out that my experience on that stage meant something to that young person or that family. For instance, I was in Maryland the other day and the mother of a young transgender boy told me that it was the night of my speech that her son came out to her as transgender. They were watching the convention on the couch in their living room and the mother, who had sort of suspected that maybe her child is transgender, after I spoke turned to her child and said, “Do you see that? A transgender person spoke at the convention. You can be transgender and pursue your dreams—and reach them.” And she added: “Do you have anything you want to tell me?” And her son said, “Yes: I’m a boy.” That began their family’s journey to embracing their child and allowing their child to live openly—and authentically.

I’ve had a few moments like that since last year that have shown me that identities and dreams don’t have to be mutually exclusive. That gives me the fuel I need to keep working.

Still, the landscape for transgender folks—especially for transgender women of color—seems bleak. And with the likes of Attorney General Jeff Sessions and Health and Human Services Secretary Tom Price leading key parts of Donald Trump’s administration, we can’t really look to our political top brass for help. What are some of the biggest challenges facing the transgender community?

There’s no question that we’ve seen some progress—there’s no question that we’ve seen increased visibility. But the reality for so many transgender people is still one of discrimination, fear, and, very often, even violence. It’s a reminder that our progress isn’t always linear. At the same time as we’re seeing increased visibility of transgender folks, we’re also seeing, in many cases, more transgender people facing discrimination. Most notoriously, in February, President Donald Trump overturned former President Barack Obama’s Title IX guidance, which steered schools to protect transgender students’ right to access facilities that match their gender identities. This made clear that the Justice Department has no interest in protecting their rights [according to a 1972 civil rights law]. We’re also seeing a large package of anti-equality bills being introduced in state legislatures all across the country [last month, the Human Rights Campaign was tracking more than 100 bills in 29 states it considered anti-LGBTQ]. Another challenge is being more inclusive, particularly of transgender women of color, when we talk about transphobia.

And the challenges go beyond the more blatant examples of being fired from a job or being denied housing, though these are common experiences. There are also smaller daily indignities: the fact that more than two-thirds of transgender people report some sort of mistreatment in health care settings, ranging from a physician denying them care outright, to a provider refusing to touch them, to being blamed for whatever medical condition they come in with.

Picking up that thread of visibility as a tool, could you tell me a bit about the work you’re doing to build on previous moves toward equality, as well as to resist rollbacks?

For eight years, we had an ally in the White House like we’ve never had before. Obama and his administration pushed equality forward in ways that, I think, defied expectations and brought real, tangible change for people of different backgrounds within the LGBTQ community. And in Trump and Mike Pence, we have a president and a vice president who are hostile to the dignity and equality of LGBTQ people. Within a matter of a few weeks of taking office, the Trump administration took direct aim at the rights of transgender students when it rescinded life-saving guidance upholding the safety of transgender young people in our nation’s schools. And we’ve seen the appointment, repeatedly, of individuals with a long record of discrimination. For instance, Mark Green, who’s championed anti-LGBTQ discrimination within the Tennessee state legislature, has been nominated to succeed Eric Fanning, an openly gay army secretary.

So this is an administration that presents a lot of challenges for our community. But we’re still resolved to rise up and defend the progress of the last eight years, as well as move equality forward in workplaces, hospitals, and homes across the country. The reality remains that even if we no longer have a friend in the White House, we can still open hearts and change minds. We can still push forward within the courts, and we can still move non-discrimination protections and equality legislation forward in city halls and state legislatures—and that’s what we’ll continue to do. It’s also important to note that when we’re talking about defending dignity and progress, we’re not just talking about it in terms of sexual orientation and gender identity-explicit issues. We’re also talking about pushing back against all hate emanating from the White House, because LGBTQ people are women and Muslim and people of color and people with disabilities and immigrants and all combinations of these and more. And when Trump and his administration attack any one of us, they’re attacking all of us.