The Rise and Reign of the Welfare Queen 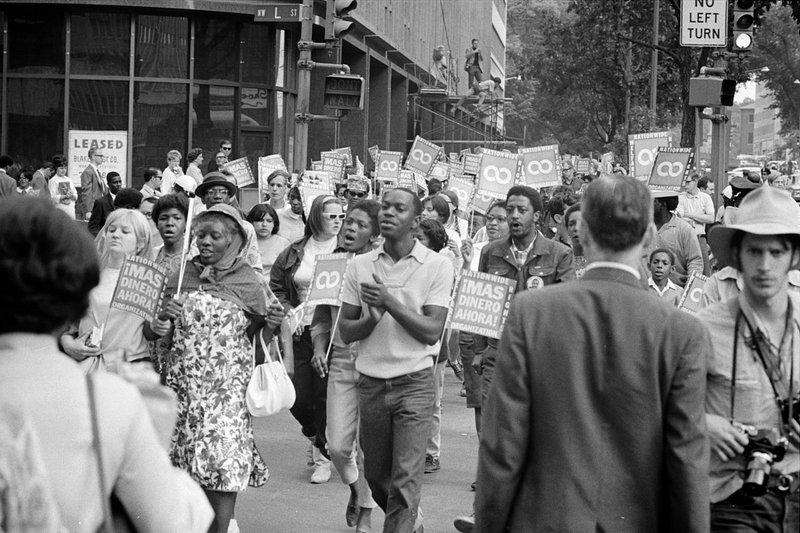 At a campaign rally in 1976, Ronald Reagan introduced the welfare queen into the public conversation about poverty. “She used 80 names, 30 addresses, 15 telephone numbers to collect food stamps, Social Security, veterans’ benefits for four nonexistent deceased veteran husbands, as well as welfare. Her tax-free cash income alone has been running $150,000 a year.”

Who the beneficiary of policy is perceived to be is of material consequence to how it is designed. For the past forty years, U.S. welfare policy has been designed around Reagan’s mythical welfare queen—with very real consequences for the actual families urgently needing support.

Though it was Reagan who gave her the most salient identity, the welfare queen emerged from a long and deeply racialized history of suspicion of and resentment toward families receiving welfare in the United States. Today, 20 years after welfare reform was enacted, this narrative continues to inform policy design by dictating who is “deserving” of support and under what conditions. Ending the reign of the welfare queen over public policy will require recognizing this lineage, identifying how these stereotypes continue to manifest, and reorienting policy design around families as they are—not who they are perceived to be.

Modern-day “welfare” originated from legislation to assist families destabilized by the Great Depression. Although the New Deal laid critical groundwork for future anti-poverty efforts in the U.S., the bifurcation of support along racial lines was present from the start. The 1935 Social Security Act specifically excluded domestic work and agricultural labor—industries that relied heavily on black men and women—from Social Security eligibility. Meanwhile, states had substantial discretion in determining eligibility for welfare, i.e. the Aid to Dependent Children (ADC) program—flexibility that southern states sometimes used to restrict access to benefits during harvesting seasons, effectively coercing poor, black families into working in the fields at whatever wages were offered. By 1939, the ADC caseload was 80 percent white, despite the disproportionate burden of poverty on black families.

As black Americans moved north during the Great Migration, more black mothers began accessing ADC. This change in dynamics precipitated increasing hostility toward the program in north and south alike, which welfare advocates tried to counter by emphasizing “families,” and specifically white families, as the primary recipients of benefits. Indeed, the political rhetoric and imagery around the “War on Poverty” focused on the white, rural poor to maintain broad support.

However, in the years following the reform, as civil rights struggles intensified, the media’s portrayal of poverty and its relationship to race dramatically shifted. In 1964, only 27 percent of the photos accompanying stories about poverty in three of the country’s top weekly news magazines featured black subjects; the following year, it rose to 49 percent. By 1967, 72 percent of photos accompanying stories about poverty featured black Americans.

It wasn’t just photos that changed. In the late 1960s, the emerging welfare rights movement sought to shift the narrative around public assistance, drawing on the civil rights movement’s rhetoric about dignity, opportunity, and justice, and amplifying broader calls for economic rights as a critical complement to civil rights and a prerequisite for substantive equality. Members of the National Welfare Rights Organization (NWRO), who numbered over 100,000 at its peak, “claimed decent income as a right” without tying it to wage work, and, relatedly, also emphasized the work of caregiving. And though the NWRO plan included work incentives so that those who did work would be better off than those who did not, it did not define social citizenship in terms of wage work as prior movements had done.

But, the movement never realized this goal. In fact, the advocacy of low-income black women for a guaranteed income that wasn’t tied to work—and against the backdrop of a national economic recession—triggered a new wave of backlash against welfare recipients and intensified racialized criticisms of the “undeserving” poor.

By the time the “welfare queen” finally emerged on the national stage, the American public was primed for a face to be attached to the perceived waste, fraud, and abuse they saw as enabled by indulgent government programs and absent accountability. By 1989, 64 percent of Americans felt that “welfare benefits make poor people dependent and encourage them to stay poor,” shoring up the political support for reform. When President Bill Clinton declared an end to “welfare as we know it” in 1996, time limits, work requirements, and strict sanctions for noncompliance were presented as acts of repudiation against that system.

In fact, they had the opposite effect: rather than eliminating the myth of the welfare queen, these reforms codified it by shaping policy choices around the prevention of willful idleness and criminal behavior. As a result, welfare reform created a system that expects the worst from families seeking assistance, and in so doing further entrenches a presumed link between poverty and poor character in popular discourse. This orientation is clear in the punitive policies that appear in response to non-existent problems.

Fifteen states, for example, drug-test applicants as part of their screening process for TANF. These policies stem from a perception that people in poverty, and in particular welfare recipients and people of color, are more likely to use illegal drugs, despite evidence contradicting this claim. Predictably, this reliance on stereotypes rather than evidence when designing these policies has proven wasteful and inefficient, costing Missouri, for example, $336,297 to identify a mere 48 positive tests among nearly 40,000 TANF recipients.

Similarly, fifteen states prohibit families from receiving higher benefit levels if a new baby is born while the household is receiving assistance, which “stem[s] from a theory that cash aid serves as a disincentive for poor women to marry and an incentive for them to have more children.” In fact, these policies simply hurt poor children (to say nothing of the absurdity of presuming a woman would have another baby to receive at most an extra few dollars a day, given that the estimated costs of having another child are around $8000 per year).

Over time, politicians have contrived their own modern equivalents of the welfare queen, with policy implications of their own. Newt Gingrich infamously lamented a food stamp recipient who used her benefits to fly to Hawaii at the taxpayer’s expense. As anyone who has actually received SNAP (Supplemental Nutrition Assistance Program) would know, benefits are tightly restricted to food products off of the self (no indulding in the hot bar allowed!) and can’t even be used to buy other necessities like diapers, much less a plane ticket.

Images like these have spurred a new wave of policy restrictions around how benefits are accessed and distributed. Federal legislation passed in 2012 requires states to prevent TANF recipients from using EBT cards in liquor stores, casinos, and strip clubs, despite minimal evidence benefits were used in these establishments. In California alone, this policy resulted in a significant diversion of time and money to deactivate over 6500 ATMs across the state, including in rural and tribal areas where the nearest ATM may simply be in a prohibited location.

Smilarly, in Arizona, policymakers discontinued the direct deposit option for TANF recipients, operating under the misguided assumption that the federal law required them to do so in order to mandate that benefits be administered through a product that allowed the state to monitor for prohibited activity. As a result, households that could have formerly accessed their TANF assistance through their own bank accounts now have no choice but to use the state-issued EBT card, which charges a fee for every ATM withdrawal—chipping away at what is already a paltry $280 a month benfefit for a family of three.

As anti-poverty programs increasingly rely on surveillance and sanctions, they strengthen an association in the public imagination between poverty and criminality. In so doing, these policies further stigmatize the receipt of public assistance rather than strengthening these programs’ capacity to respond to critical needs. Designing public policy around the needs and experiences of real families—not mythical abstractions—will be essential for decoupling public assistance and stigma and achieving a social safety net that truly supports the full participation of all Americans in society and the economy.