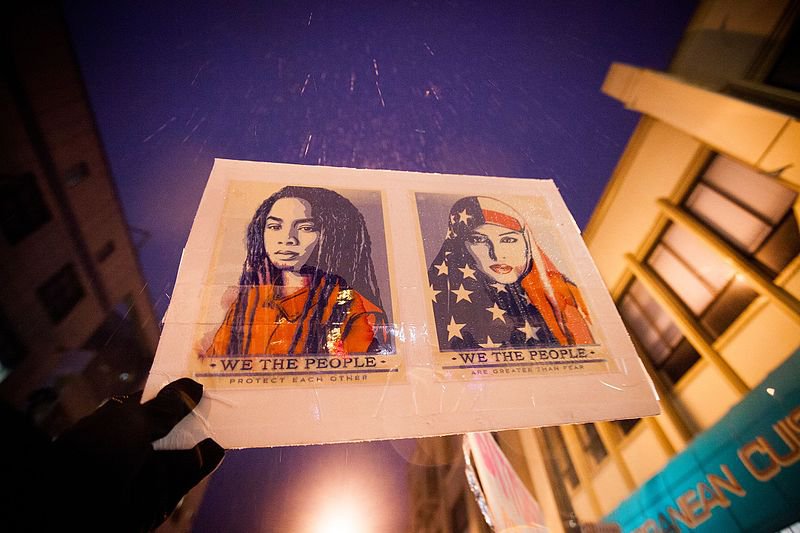 What is the American Muslim narrative—beyond what is defined through the prism of 9/11, anti-terrorism, and national security? Are there any alternative narratives with which Americans can associate when they meet a fellow American of the Muslim faith?

The answers to these questions lie in the current state of America—in the American Muslim community, in particular—and in highlighting stories that show the community’s humanity, diversity, and values.

Recent data can give us a pulse on at least some of the prevailing sentiments regarding American Muslims. A new Pew Research Center survey shows that Americans view “more warmly” the seven other religious groups—Jews, Catholics, mainline Protestants, evangelical Christians, Buddhists, Hindus, and Mormons—mentioned in its survey on how Americans feel toward different religious groups. These sentiments are also reflected in the American Muslim experience, especially  in the aftermath of last year’s heightened campaign rhetoric that only reinforced the “Muslim equals threat or terrorist” trope. Indeed, another new survey, this one by the Institute for Social Policy and Understanding (ISPU), shows that the “majority (60 percent) of American Muslims [have reported] some level of religious discrimination” in the last year. And the FBI reported similarly disheartening figures: a 67 percent surge in anti-Muslim hate crimes from 2015 to 2016.

What is particularly alarming is that each of these recorded incidents and inferred sentiments is a narrative that entrenches the 9/11 or national security frame that all too often straightjackets American Muslims. American Muslim community leaders, organizations, activists, and scholars are most often reacting to anti-Muslim sentiments and actions. The term “Islamophobia,” for example, now has currency in US mainstream media and policy circles. But while there is more awareness that American Muslims face discrimination because of their faith, this reactionary positioning of American Muslims also reinforces the notion that Muslims are to be feared.

In his book on framing in politics, Don’t Think of an Elephant, cognitive scientist and linguist George Lakoff not only argues that “negating a frame” “activates” rather than diminishes that frame, but he also highlights that the “more it is activated, the stronger it gets.” He defines a frame as an idea or a mental structure that forms the way we see and comprehend our surroundings, rather than a mere slogan or sound bite.

This isn’t to suggest that incidents of prejudice and discrimination against American Muslims shouldn’t be condemned or resisted. “When you are dealing with xenophobia of any kind, you are most likely going to react to incidents of bigotry as they occur,” argues Arsalan Iftikhar, author of Scapegoats: How Islamophobia Helps Our Enemies & Threatens Our Freedoms. These efforts are also important if we want to safeguard the rights of American Muslims as citizens and uphold the values of American democracy. However, Ifitkhar adds, to “proactively combat Islamophobia,” American Muslims “need to highlight human interest stories” and therefore create alternative narratives that reflect their diversity and contribution to America.

So how can we reimagine these narratives?

In Lakoff’s world, producing alternative narratives is a matter of reframing, which he describes as “social change,” that requires time, strategy, and commitment. Akin to any process of social change, reframing is driven by values and by not cosmetic tokenism or sniffy sound bites that only capture facts and figures about the community; Muslim Americans need to communicate their values in order to be better understood.

This is where personal storytelling comes into play. Storytelling has, historically, been an effective means to shape identity and to build community. Personal stories are vessels carrying our experiences—emotional and physical—as well as the values shaped by these experiences. Once these personal stories are shared with others across diverse communities, these human experience and values form what Harvard University Professor and community organizing expert Marshal Ganz calls “an empathetic bridge,” one that helps to connect people together despite their differences.

By generating and sharing their own personal stories, American Muslims will not only own their own narrative, but also shape the frame that has been created and repeated continuously by others post-9/11. What do I mean? For example, there is certainly a positive narrative that can be produced about American Muslim contributions to the economy and society. As Iftikhar notes, “most Americans don’t know that even though Muslims represent 1 percent of the American population, [they] represent 10 percent of doctors across the United States.” In addition to repeating this statistic on the airwaves, personal stories of American Muslim doctors and their valuable work in their locales would “humanize” the American Muslim community and, as Iftikhar argues, “lessen the impact of Islamophobia at the local grassroots level.”

Such proactive engagement requires courage—which is particularly challenging in our current politically polarized environment. ISPU’s survey shows that American Muslims are “among the most likely to negatively react to the electoral outcome,” with 18 percent making “plans to leave the country ‘if it becomes necessary.’”

However, there’s also hope in the initial response of the American Muslim community to the post-election political reality. The same survey shows American Muslims increasing their donations to their faith-based community organizations and volunteering for the first time in civic organizations. These are certainly positive indicators about a new shift in a community that has been “very insular in the United States,” according to Joseph Lumbard, Professor the Arabic and Translation Studies Department of the American University of Sharjah.

“To change the narrative Muslims need to continue the process of being engaged,” Lumbard says, emphatically. Additionally, this engagement must include a clearly defined reframing strategy with personal storytelling at the heart of it in order to introduce new narratives about the American Muslim community, illustrating their humanity, their diversity, and their values through mediums that are not solely built into the national security or terrorism paradigm.