The Progressive Mayor of Seoul on Tweeting, Technology, and the Upcoming Korean Presidential Election 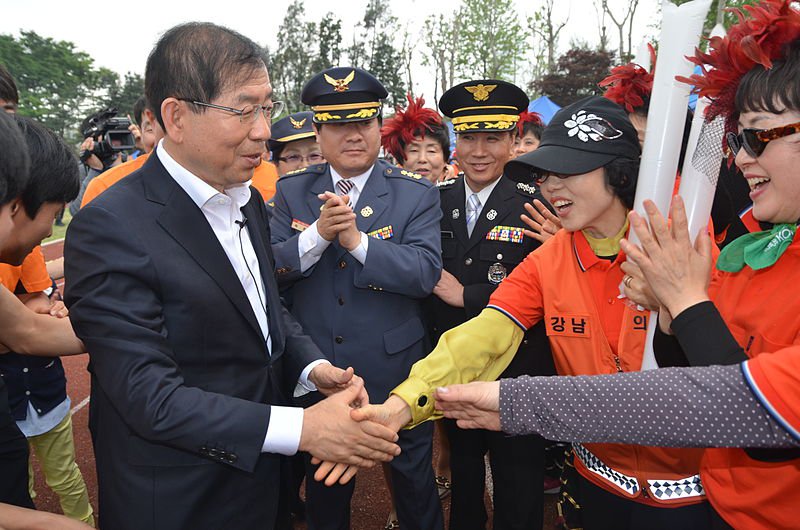 Park Won Soon has the calming mien and crinkled smile of a beloved college professor. But Park isn’t about to lead your favorite seminar; he’s busy serving as the 35th Mayor of Seoul, South Korea’s sprawling capital of ten million people. Park is also widely rumored to be contemplating a run for the country’s top post in the 2017 Presidential Election. Should he win, Park would join the ranks of several former mayors, notably Lee Myung-bak, who have moved several kilometers from Seoul’s City Hall to the Blue House, Korea’s Presidential Palace.

A former human rights lawyer, Park is known for his progressive and occasionally populist politics. His activist streak dates back to the 1970s, he was expelled from the prestigious Seoul National University and imprisoned for four months after protesting the policies of then-dictator Park Chung-hee—the father of the current South Korean President, the conservative Park Geun-hye.

During a recent trip to San Francisco–fêting the 40th anniversary of Sister City relations between the two metropolises–the Mayor sat for an interview in which he discussed his tenure, various social policies he is pursuing, and Seoul’s high tech aspirations. He also revealed a personal penchant for tweeting at—and taking selfies with—his constituents. Although he is fluent in English and holds a degree in International Law from the London School of Economics, the interview was conducted in Korean with an interpreter.

Park Won Soon’s initial election in 2011 was seen as a sharp rejection of the political status quo. Back then, he was a political outsider with no prior political experience and no party affiliation (although he is now part of the liberal Minjoo Party). Park carried the votes of many younger Koreans, and some likened the election to South Korea’s “Obama” moment of hope and change.

A major challenge of Park’s tenure (as, some might argue, with Obama’s) has been to live up to those expectations, and balance his ambitions for transforming Seoul into a first-rate global city with the realities of Korea’s deeply traditional society. For example, Park initially won international praise for being the first South Korean politician to announce his support for gay marriage. However, he backed down from this position following heavy criticism from conservative Christian groups, a crucial voting group. Many Korean progressives saw this as a calculated political maneuver, and a major breach of trust.

Similarly, the grisly murder of a woman in the Gangnam Metro Station this summer catalyzed a national discussion about feminism in Korea in general and Seoul in particular. Following a number of misogynistic reactions to that murder, many Korean women have come forward about their experiences with bias against women or casual misogyny. Despite the fact that the country’s head of state is a woman, South Korea ranks a dismal 115th on the World Economic Forum’s Global Gender Gap Index, trailing the United States (28) and neighbors China (91) and Japan (105). South Korea also has the highest gender wage gap of OECD nations. Some have gone so far as to describe Seoul as a city where the technology of 2050 is juxtaposed with the customs of 1950.

Nonetheless, Park remains upbeat about how the Seoul can use technology and creative social policies to improve the quality of life for the average city resident. When asked about what cities like San Francisco and Seoul can learn from each other, Park commended San Francisco on its minimum wage policies. “I believe that to make a city more attractive, we need to pursue policies that make cities more human-oriented,” he said.

In particular, Park stressed the need for economic policies that respect labor. In Seoul, he’s working to expand protections for Seoul’s many contract-based “irregular workers.” Dependant on contract-based employment and ineligible for most protections under Korean labor laws, irregular workers’ “[employment] status is not stable and their wages are kept very low.” As a first step towards expanding their rights, the Seoul City Administration at the Mayor’s direction recently opted “to give all 7,200 of its irregular workers full worker status, and is calling on the business community to follow suit.”

Park is also deeply excited about the potential of technology to transform urban life. American visitors to Seoul often marvel at the degree to which Koreans incorporate technology into their everyday activities. In part, what has enabled this is the availability of reliable, fast, and affordable broadband throughout the country. Park, who recently announced a municipal free wi-fi program, referred to Seoul as “the Smartest City in the World. ”

“We have the best IT infrastructure, Internet access rates, Internet speed, and so on” said Park. “To become an even smarter city going forward, we also hope to make use of big data and the Internet of Things (IoT), and to that end we’ve created the Digital Seoul 2030 Master Plan.”

“We’re going to install free Wi-Fi zones throughout the city, which will power IoT experiments, and [by collecting and creating databases for urban data,] we’re going to be able to better predict, analyze, and solve urban problems. Our goal is to make Seoul the flagship city of the Fourth Industrial Revolution.”

Park hopes to one day provide Seoul’s citizens with every possible kind of municipal data, describing a hypothetical where a small business owner, puzzling over where to site a new restaurant, can [Ed. note: this originally read "will be able to" and was changed after comment from the Mayor's team] look up the number of apartment complexes or patterns in subway traffic near a potential location. “We want Seoul to be a ‘transparent city’ in that way,” said Park.

Similarly, he described a recent example of how the City incorporated “big data” to its public transportation planning.  “After the subways close down for the night, we knew that many people didn’t have a way to get home.” said Park. “While in the planning stages for late-night bus, [the city] asked KT (Korea Telecom) to send us data on which areas had the most phone calls late at night. After analyzing those locations, we introduced nine ‘Night Owl routes,’ which are currently in operation.”

“There are many examples of when social media interactions influence the way I do my job. In fact, the Night Owl Bus was actually suggested to me by a university student via Direct Message on Twitter.” Here, Park pulled out his phone, opening the Twitter app—he has about 1.6 million followers—and scrolling to message that read in Korean, “Thank you for the attention, sorry to bother you!"

In the course of any given day, Park says he receives “so many tweets that I cannot possibly respond to every single one of them, but from time to time I do respond and find something interesting that I then task my staff with, like changing a certain policy. Later, I receive messages back from constituents noting and appreciating the change.”

A 2015 Pew Research Center survey showed that many South Korean youth are deeply pessimistic about their future; many more harbor low levels of trust in government. Park sees his policies of transparency through city data, and providing direct access to himself through his online presence, as working to rebuild that trust.

“Many of the youth are in despair because of low growth and high unemployment,” said Park, referencing a suggestion of Bernie Sanders that this generation could be the first generation in history worse off than their parents. “I try to interact, communicate and empathize with the youth, and hopefully this will help reduce distrust in government.”

When asked whether or not he had decided to run for the presidency, Park chuckled and switched to English. “Now where did you hear that?” he exclaimed.  “Many Korean and even foreign journalists have asked me this question.” he said. “I believe that my next political career will depend on my performance and achievements as the Mayor of Seoul.” Remarking that “heaven knows” who the next President will be, Park then diplomatically stated that, “as of right now I am focusing on fulfilling my responsibilities as the Mayor of the Seoul.”