The Politics of Going to the Movies 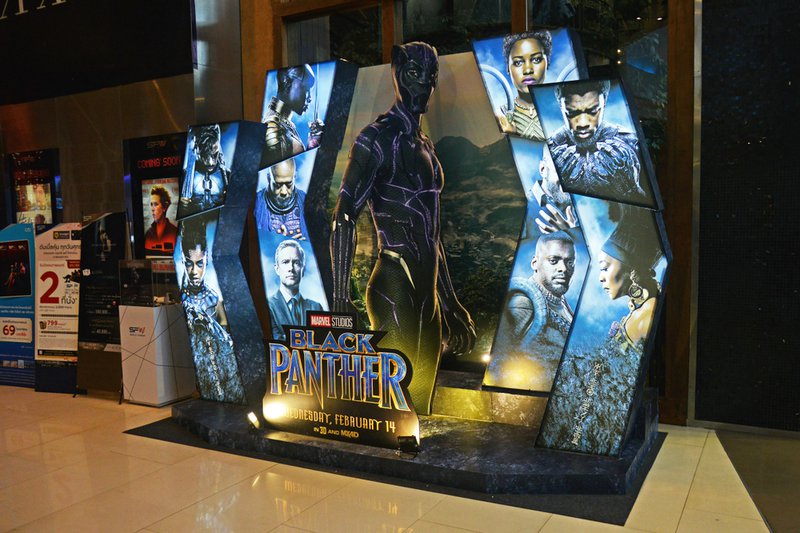 This article originally appeared in New America Weekly in February 2018.

Black Panther—Ryan Coogler’s blockbuster movie set in the Marvel universe—opened nationwide last week, shattering box office records and myths about what types of movies can be successful. Ahead of the film’s release, my family and I talked about when we would see the film—after all, we said, it’s Black History Month. Of course, to an extent, we were kidding; everyday is Black History Month for us. Plus, my family and I don’t live in the same city, so coordinating a time to watch the movie, together, would be difficult. And yet, what we were really getting at wasn’t merely the joy that comes from this Black movie-watching experience, but also its challenges: We’re all too familiar with the challenges that often accompany being a Black movie-goer in majority-white spaces.

Growing up, going to the movies became an immensely pleasurable—even reassuring—pastime for my brother and me. Sometimes we’d go on Saturday afternoons, if our father’s mail route was light. Other times we’d go after church. And we’d always, always go on holidays. Our favorite theaters were typically stuffed with folks who looked like us—biracial Black people—and, more specifically, like our dad, who’s Black (our mother is Korean). We grew up in the Deep South, in a chocolate city, but my brother and I went to predominantly white schools. So, looking back, being able to experience all the attendant emotions of going to the movies surrounded by other Black people—to be in a space in which we weren’t “the only ones”—had a profound impact on my identity as a Black woman.

But later, as a young adult, I eventually learned just how precarious that relationship between cinema and personhood—especially Black personhood—could be.

I attended college in a small, Southern town—Oxford, Mississippi—known for its independent bookstore, Confederate statues, James Beard restaurateur, rowdy students, and drunk Nobel Laureate native son William Faulkner. As a young Black woman in Oxford, I existed within a fundamental tension: between the white, liberal progressivism often reflected in literary and film festivals, farmers markets, and Indian-Southern fusion restaurants on the one hand, and neo-Confederate iconography, absurd income inequality, and rampant racism on the other.

I spent nearly eight years going to movies, again doing one of my favorite and most self-affirming things, in this place. I quickly learned that watching films, especially Black films, as a Black person in white spaces, could be an unnerving endeavor. Though I knew I’d almost always be one of the only non-white people in the theater, I never knew if my white theater-mates would gleefully laugh at, say, the racist jokes and taunts Clint Eastwood’s character throws at the Hmong characters in Gran Torino, or if they’d try to have the young Black teenagers kicked out the theater for supposedly talking too loudly, even though louder, rowdier groups of white teenagers also were there.

And then, toward the end of my time in that tension-filled Southern town, that nagging, unnerving feeling eventually threatened my physical safety. On a cold, clear night in January, I took one of my interns and two visiting students, both from South Africa, to a showing of Selma, Ava DuVernay’s 2015 film that chronicles the events leading up to the 1964 voting rights marches from Selma to Montgomery, Alabama. Walking out of the theater, we excitedly talked about how moved we were by the film (and an anachronism I’d picked up on and couldn’t get over).

But at that very same time, a pick-up truck with two or three young white men slowly entered the theater parking lot and headed toward us. When they reached the three young Black students under my care and me, the truck slowed to a crawl, and the passenger window rolled down. One of the young white men stuck his arm out of the window and contorted his hand into a finger gun. Aiming at us, he said, coldly, “I’m going to kill you. I’m with the KKK.”

We were all in shock, but we remained calm. By the time we were all safely in my car, the truck had circled us three times and then screeched out of the parking lot. As soon as it left, we collectively let out a sigh of relief and a nervous laugh, not quite believing that we’d just walked out of a movie like Selma and into that. I was tempted to brush off the entire experience. After all, that sort of treatment wasn’t new to me. Strangers have touched and pulled my hair, I’d been called a “nigger bitch” on campus in college, people have repeatedly told me to get out of “their” country. This was just another day, another exhausting experience.

But then I called my parents.

I could hear the very real fear in their voices, and finally I became scared, too. Though my father and mother were hardly strangers to the subtle and unsubtle racism that can come with being a Mississippi-born Black man and Korean immigrant woman, all while raising biracial Black children in the Deep South, this was the first time I could feel their fear over what had happened to me.

They knew that this wasn’t just a case of dumb kids doing dumb (read: racist) things. Real violence could have happened. Real violence had happened before.

I almost let the experience stop me from going to the movies, and, honestly, it took years before I could see a movie at night again.

It’s with these experiences in mind that I think about the release of Black Panther, and how the film is, for so many people, more than just a movie. It’s an occasion with valence, one that offers Black viewers the opportunity to see characters who look like us be the heroes (we should all want to be as badass as General Okoye and the Dora Milaje!) and villains. It’s also a chance to show the world, yet again, that stories centering blackness can make money around the world.

But perhaps above all, it’s an opportunity to share an experience so explicitly and thoughtfully Black in spaces where we might be “the only ones.”