Most Ballot Measures Require a College Degree to Understand 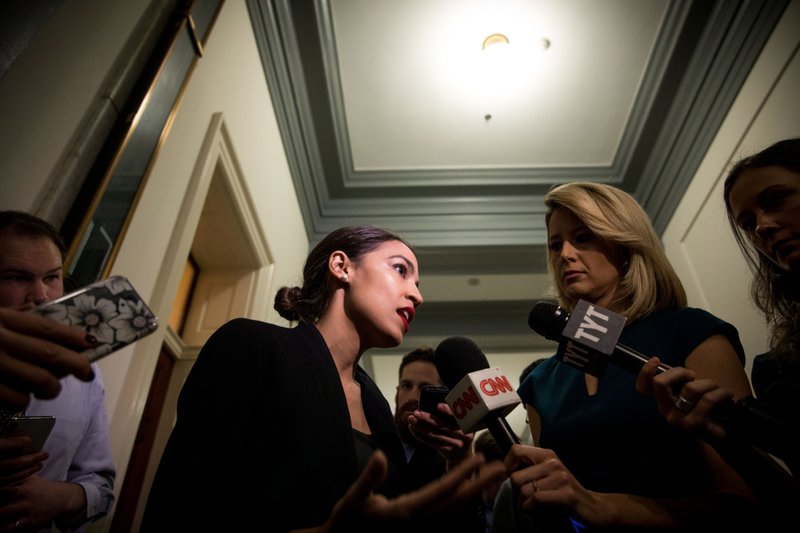 Last Saturday, Congresswoman-elect Alexandria Ocasio-Cortez (NY-14) posted an Instagram Live Story. In it, she explained how the House congressional committee system works—and, briefly, the ambitions of her new progressive bloc—to her 1 million followers. Last month, she did the same thing: another Live Story, featuring Ocasio-Cortez answering questions her viewers had sent in about the political process. As she’s been going through the congressional orientation process, she’s also been saving behind-the-scenes explainers as a sort of highlight reel called “Congress Camp 1.”

These Instagram Stories have captured a lot of attention, especially online. At one point, 3,375 people were watching Ocasio-Cortez break down House committees as if she were teaching a massive U.S. Government 101 class—on a Saturday. Part of the appeal is most likely her perceived authenticity. But another, equally important factor is her ability to explain a byzantine process in plain, approachable language. According to Scott Talan, a professor of Public and Strategic Communication at American University, Ocasio-Cortez’s posts are “revealing, sharing, and literally educating people about what it’s like to be a first-term member of the U.S. Congress.”

Indeed, in a world of boundless, baroque access to information, interactions with Ocasio-Cortez are so resonant in no small part because they’re very much the opposite of what interactions with the government, representatives, and public services are normally like. In that light, her straightforward, simple approach may offer a few pointers on how the government might address its communication problem, especially because this isn’t just a civic-education problem. Even for people who are politically savvy, they may not have the familiarity with an enrollment procedure to painlessly navigate the process—or the decades of education new research says is necessary to understand key ballot measures.

At a time when Americans have remarkably low levels of civic trust and a wide range of individual familiarity with the political process, adding more accessible language, like that used by Ocasio-Cortez, really is worthwhile—with or without Instagram.

Governmental and political language is often dense: stodgy legalese, passive voice, conflicting instructions. In turn, it creates huge communication barriers to and within government services, obstacles that typically leave citizens feeling frustrated with various institutions. More specifically, this broader communication problem is embedded in the many ways citizens interact with the government, ranging from the ballot box to mailed communication.

In fact, it’s so bad that, in 2010, Congress tried to address the problem with the Plain Writing Act, mandating federal agencies to write with “clear government communication that the public can understand and use.” Former President Bill Clinton signed two Executive Orders, in 1993 and 1996, briefly calling for clearer language to communicate changes to regulations and federal laws impacting the federal court system, respectively. Yet, despite these efforts, communication still doesn’t often include best practices like using short sentences, stating what will happen, providing clear instructions, using clear pronouns and subjects, or explaining requirements.

More recently, these problems were on display in the 2018 midterms. In addition to voting for individual candidates, most states also voted on various ballot measures, many of which passed and made headlines for how they’ll change issues like campaign finance, electoral systems, and felon voting re-enfranchisement. For all the power that ballot measures have, though, they’re also extremely inaccessible.

The nonpartisan political reference website Ballotpedia conducted a study in 2017 and 2018 to determine the reading level that would be required to adequately interpret ballot measures across the country. This year, they found that the average ballot measure requires 16 years of formal U.S. education to understand, with the most difficult needing approximately 43 years of study to comprehend. In 2017, the average was 20 years. While it’s true that Americans are more educated than they’ve ever been—in 2017, 90 percent of Census respondents 25 years old and older had high school diplomas—those 12 years of school are a far cry from the 16, 20, or 43 years of study that Ballotpedia indicates are necessary to fully and adequately engage in this crucial aspect of the political process.

Whitney Quesenbery and Dana Chisnell, co-directors of the non-profit educational research organization Center for Civic Design, argue that it’s usually unclear what a particular measure will change, who will benefit, and what the deceptively simple “yes” and “no” votes actually mean. In their research, they found that voters’ biggest complaint is that “ballot questions seem written to purposely confuse them.” At best, such a sentiment fuels the confusion and frustration voters already experience at the polls—what, for many, is their only participation in the democratic process. At worst, it could erode civic trust, because though confusing ballot communication is an issue that only surfaces roughly every two years, unclear interactions with, say, government departments are a problem for many people every day.

Adding linguistic clarity into an at times monstrously complex system like government can start at the local level. Cities like Philadelphia have already begun experimenting with ways to address this communication barrier. As recent research from Chayenne Polimédio, Hollie Russon Gilman, and one of the authors of this piece found, taking a human-centered design approach to public service communication is one small way to make a big difference in closing this gap. The PHL (Philadelphia) Participatory Design Lab, a project housed in the mayor’s office, sends fellows to collaborate with different city departments. One of two pilots reimagined how the Department of Revenue could communicate with residents enrolled in the Owner-Occupied Payment Agreement, a program that helps homeowners pay back real-estate taxes they owe. Legally, most of this communication has to happen via mailed letters, which also gave the Design Lab the opportunity to implement a simple A/B testing model to see how people responded to different versions of the same message.

With these experiments, they made some interesting findings: Clear language was the winner, specifically when used to explain the harsh penalties residents could face. The right tone, however, was just as important. While a dramatic, ominous tone worked, it didn’t foster the kind of relationship the city ultimately wanted. And, not surprisingly, residents also didn’t respond well to overly cheery messages about the taxes they owed.

This kind of improved communication clearly benefits the city by making people more likely to pay delinquent taxes. And for residents, if something as painful as paying back taxes can be clearer and more pleasant, that meaningfully changes their relationship with the city.

Benefits programs see these same problems, too. In 2016, the United States Digital Service and Centers for Medicare and Medicaid services interviewed applicants to map out problems in benefits enrollment. In their research, they repeatedly note that applicants encounter “technical and formal legal/policy language that [is] confusing and opaque” in both print and web contexts. As their report puts it, “the bureaucratic language on human services websites works for policy makers, but it doesn’t work for people. [Unclear] language… walls off people.” One user the study interviewed pointed to a telling example: “They ask, ‘Do you want to speak with an agent or a counselor?’ What do those words mean? I can’t tell the difference!”

All of this matters, of course. Without legible instructions and information, applicants can, for one thing, miss deadlines and lose their benefits, only ramping up the overall anxiety often already experienced throughout the application process. And when people have to restart the application process because of these problems, it also means more work for civil servants.

Of all the problems we face in politics right now, unclear government language may feel like a minor one. Or simply that it’s “how things are,” and that citizens aren’t motivated enough to pay close attention, anyway, regardless of their reading level. But improving interactions with the government has the potential to create a “halo effect” with citizens. As Karen Schriver argues in her chapter of Information Design as Principled Action, there’s “a tendency to generalize a value judgment about a person, product, or service to another.” Through supportive experiences with one agency or office, citizens may be more likely to associate positive feelings with government as a whole. And if participating is easier, it may also encourage others to get involved, especially those who’d shied away from participating in the past.

Though seemingly small, communication choices can have a tremendous impact on how government processes are perceived or understood. By understanding the audience of a particular program or service, governments have the opportunity to better tailor their communications to them, and build trust with constituents as a result. If it feels like every part of the daily government process—from the ballot box to taxes to crucial health services—is designed to keep people out rather than help them out, it’s hard to imagine people feeling that the government works for them, or that they can even trust their government.

At a time when Americans have remarkably low levels of civic trust and a wide range of individual familiarity with the political process, adding more accessible language, like that used by Ocasio-Cortez, really is worthwhile—with or without Instagram.