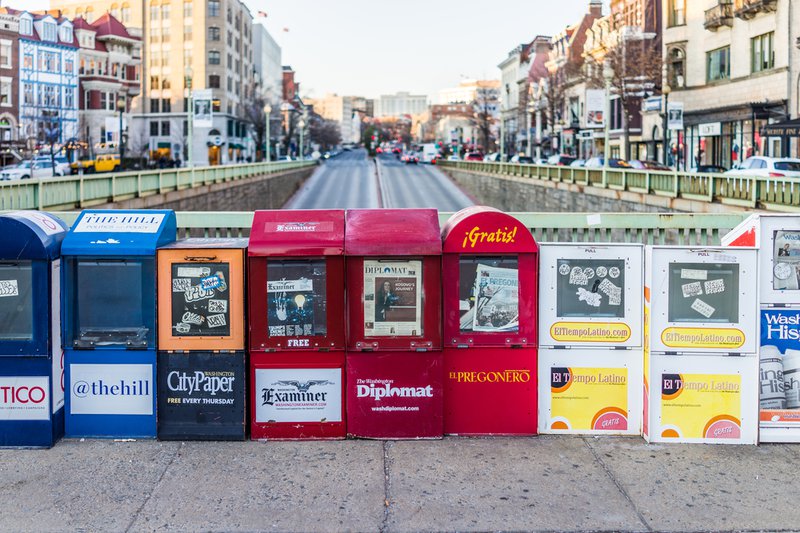 “The four elements of literacy—the ability to find, understand, create and act on information—are part of the ‘new literacies’ of the modern era: information literacy, digital literacy, media literacy and news literacy. … No one is born with these literacies. Education matters.”

This declaration was the crux of a powerful excerpt from a report co-authored last month by the Walter Cronkite School of Journalism and Mass Communication’s Eric Newton for the Knight Commission on Trust, Media, and Democracy.

“Whose job is it,” Newton asks, “to help a community understand news?”

Over the past several years, many in the journalism community have been working to establish what exactly the public understands about how the news is made, often with the help of polls and surveys. For instance, a Pew survey released shortly after the 2016 election tackled Americans’ relationship to “fake news.” And last year, research from the Media Insight Project dug into what “Americans and the news media do—and don’t—understand about each other” and found that basic terms like “attribution” and “op-ed” were poorly understood by large segments of the population.

And the most eye-popping result of late: A new poll that showed that 60 percent of all respondents believe that journalists are sometimes paid by their sources.

Journalists were duly horrified by this bizarre finding, but also short-sighted in processing what it might tell us about Americans’ relationship to news—one of Newton’s core literacies.

It’s important that curious, conscientious journalists are invested in addressing this underrated facet of a thriving society. But it’s becoming clear that the professionals aren’t always able to step far enough back from their own expertise to ask the kinds of questions that will help them understand what people are trying to tell us.

We need to ask ourselves why it is we expect the public to understand how the news is made if no one’s ever taught them—and why we think that responsibility rests solely on journalists.

“How does the public think journalism happens?” This was the theme of that newest poll, published last month from Reuters/Ipsos, in collaboration with the Columbia Journalism Review. It went deep on demographic breakdowns—urban/rural, Democrat/Republican, male/female, Millennial/Baby Boomer, White/Black/Hispanic—and bias. It was a wide-ranging effort to glean information about current public perception.

The survey was published in the Winter 2019 issue of CJR alongside a thoughtful essay from editor Kyle Pope. “If we are unwilling to engage with people about how they see us,” he writes, “we fail to perceive the world as it is, and we’re unable to do our jobs.”

As noted, the findings got a lot of attention from journalists. But I was baffled both by the way some of the questions were phrased, and by what was left unasked. I don’t think that these answers tell us as much as we’d like to believe.

Journalists should look at just the first two questions—about confidence in institutions and news sources—and consider: With everything they know to be true about how media works, how would they answer?

To me, that very first question was like a pomegranate: Split it open and a million tinier questions come tumbling out. The 4,212 survey respondents were asked: “Would you say you have a great deal of confidence, only some confidence, or hardly any confidence at all in the people running the press?”

My response to any question that asks for evaluation of “the press” as one entity, without definition, is paralysis.

I have great confidence in the people I know who work to bring us accurate, sober information with context and an open mind. But that wasn’t the question.

So what are we evaluating? Do we assume it’s “the mainstream media,” and if so, is that the Washington Post? The New York Post? Public radio? Talk radio? Local papers, BuzzFeed, popular social media accounts, CNN, Fox News? And what does it matter what we think it is if we don’t know what respondents were thinking when they answered?

Dig down another layer. Are we supposed to consider only the people writing hard news, investigations, and features, or lump in op-ed columnists and whoever gets paid to shout the loudest on cable news? To many people, commentary is journalism.

It’s because I work in journalism that I can’t possibly say that I have a high degree of confidence in “the press.” Too many bad actors are every bit a part of “the press” as the ones who deserve the public’s trust. I think that many journalists would agree, and would themselves have difficulty voicing blanket credibility. So is this question really as useful as we’d like to believe?

The very next statistic is equally puzzling: Ask me about news sources and my mental filing system collapses when faced with options like “internet/online” and “social media.”

“Online” itself is opaque—is this the NYT home page? the deep, dark web? never-ending Wikipedia rabbit holes? But “social media” is the category that causes me the most agita. What does it mean? Is it taking at face value any Facebook utterance or Reddit thread conjecture? Ads, photo captions, personal posts, headlines you never click on? Does social media mean “unverified by outside sources”?

Or is the question aimed at gauging content origins? What if your Twitter account is a meticulous feed of news outlets and journalists leading you to legitimate sites—a news shortcut, essentially. If a tweet from The Atlantic’s verified account takes you to that month’s cover story (the exact same text that will show up in your mailbox a week later), is your source social media, online, or print?

It’s tough to believe that the answers matter if it’s not clear what we’re evaluating.

Which brings us back to that 60 percent of respondents who believe that journalists are sometimes paid by their sources. Yes, it’s shocking. But logically, it shouldn’t be surprising.

By neglecting to take stock of the bigger picture, journalists are missing a more foundational question that could help explain why the public might be falling short in its media assessments: Has anyone ever taught them the components of a credible news story? Have they ever received any formal education in journalism studies?

I’m often reminded of my own ignorance when thinking of sewage treatment plants or how the subway system functions—in other words, industries I rely on every day, but without ever being taught about their inner workings. Why do we expect laymen to have a different level of insight into the journalism industry?

Journalism is an inextricable component of a healthy democracy. But unlike running water or the Red Line, people can’t use it properly without understanding how it works.

Pope’s CJR essay calls for introspection across the industry. “The scale of the story we are living through today demands a higher level of journalistic thinking,” Pope says. “And we are nowhere near where we should be.”

Journalists do have a lot of work to do to build trust and help explain their processes. But in his (correct) assessment that we’re miles away from an end goal, I think that he and others are assigning too much of the blame for the public’s ignorance to journalists.

Stanford University professor Sam Wineburg, whose research has focused on history and civics in the digital age, has assessed the depth of the public education problem in a way that weaves many flailing strands together: “Bringing education into the 21st century demands that we rethink how we teach every subject in the curriculum,” he wrote for USA Today in February. “Ushering education into the digital age will demand the educational equivalent of the human genome project.” In short: an undertaking requiring money, thought, time, and mass collaboration.

For years, we’ve been chattering about proposals for small fixes. (Hopefully by now we’ve finally put to rest the notion that if Facebook just “tweaks the algorithm,” we’ll all be saved.) I think that it’s because the real solutions—policy changes—are too big to hope for: too slow, too costly, too daunting, too far out of our control.

But journalists might actually feel a little relief knowing that they’re not in this alone. No one expects members of Congress to spend their days teaching constituents how the government works. Similarly, we shouldn’t leave the explanation of how journalism works only to journalists. All citizens need a baseline understanding before they’re pushed out into the world and left to fend for themselves.

Still, until the Department of Education catches up with society’s needs, journalists can at least be aware of the gaps in our surveys and polls, and try to learn more with each new iteration. And we could do something radically analog: We could call up a favorite social studies or English teacher and have a conversation about how the news is made. We could tell them about Checkology, the News Literacy Project’s virtual classroom that helps students “learn how to navigate the information landscape.” And we could spend a few hours going through the exercises ourselves, as a way of seeing what we take for granted, and what most people were never taught.

Such a renaissance won’t be simple or straightforward. But it will be thrilling to recognize that a moment of great urgency also has great potential for progress.