The Increasing Digitization of Radical Politics 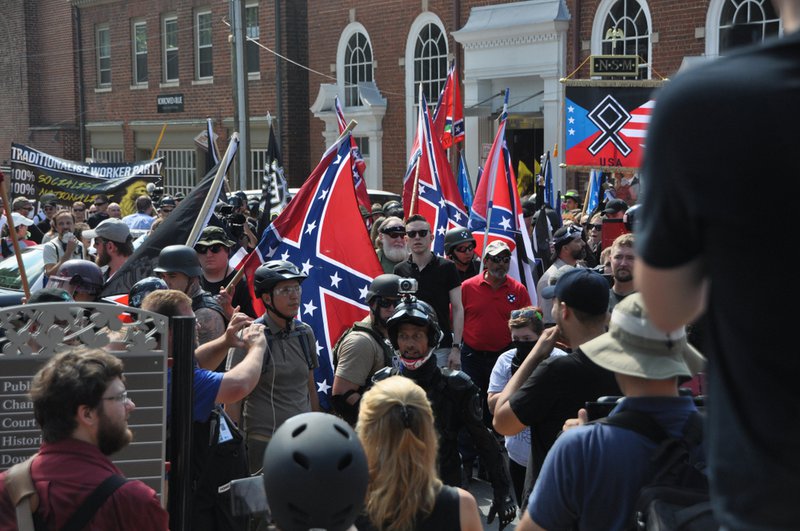 More and more, the so-called “alt-right” and the far-left leverage each other for the longevity of their respective causes. Nowhere is this clearer than online. On the internet, the two movements continue to thrive despite recent censorship efforts by some social-media platforms to ban the alt-right. More specifically, the volume of Antifa and anarchist chatter spiked before the recent neo-Nazi rallies, and the alt-right, though in ways more muted, seems to be retooling its digital tactics.

For anyone even broadly interested in keeping the two movements nonviolent, while also respecting freedom of expression and assembly, it’s important to investigate the changes in online behavior on each side. Indeed, both have plotted on the web, sometimes with violent consequences, and both use the internet to recruit and circulate propaganda. As organizations, they’re nascent, decentralized, and highly vulnerable to trolling and hacking attempts by the opposition, which in turn only increases the possibility of violence in the blink of an eye.

How We Got Here

To address this tenuous relationship, it’s key to understand how it came about. In 2017, neo-Nazi and affiliated militia groups went through specialty military training in rural parts of America. With expertise flown in from places like Germany and Scandinavia, where neo-Nazi activities date back at least to the 1970s, they discussed the new political environment frothing in countries from Austria to the United States on account of an insurgent alt-right. They wore fatigues, practiced shooting and mob control, and generally bonded through their shared experiences, values, and worldviews.

Then, utilizing content-specific websites and chat rooms, as well as mainstream social-media platforms, they planned the violence that eventually ensued at the “Unite the Right” rally in Charlottesville, Virginia, last August and that claimed the life of a counter-protester. Discord alone was their key planning tool: Between June and the rally, there were over 35,000 vitriolic messages on 44 “channels” on the Charlottesville 2.0 server on the gaming platform Discord.

Almost immediately after the rally, neo-Nazi groups found themselves banned from major social-media sites. Domain managers also closed down websites like Stormfront, the alt-right’s No. 1 web forum. Meanwhile, crowdsourcing websites like PayPal, GoFundMe.com, and Patreon, which had removed some alt-right accounts prior to Charlottesville, entirely kicked them off their websites when these groups attempted to raise money for various legal defenses.

And yet, despite all that, the alt-right’s online activities grew. They adapted accordingly, using Gab.ai, Discord, and other so-called “alt-tech” platforms, and they also increasingly put their operational details in encrypted chat rooms and on apps like Signal and Telegram.

While the neo-Nazis basked in their perceived victory, anarchist and Antifa groups on the far-left mobilized. The Charlottesville rally, combined with the careless, cavalier police there, gave Antifa and their allies not only a cause to rally behind, but also sympathy from the public in a much broader sense. A look at Google Trends shows that searches for “Antifa” exceeded those of “Nazi” and “alt-right.” Unlike neo-Nazis, who primarily recruit on the web’s fringes, Antifa is more overt about its intent to recruit for its causes, using major social-media platforms to that end. And in contrast to the public’s reactions to neo-Nazis’ digital content, Antifa’s is largely ignored.

Notably, Antifa has become bolder in its exploits. Doxxing, or the practice of revealing personally identifiable information about individuals or organizations online with malicious intent, has became a common move. After last year’s Charlottesville rally, dozens of websites, forums, and social-media channels appeared that were dedicated to doxxing rally attendees and people associated with them or the alt-right, including unaffiliated family members.

To mark the first anniversary of Charlottesville, neo-Nazi and white-supremacist groups planned another “Unite the Right” rally for Charlottesville and D.C. Forty-eight hours before the D.C. rally, sources with knowledge of right-focused media noted that there was a surprising lack of alt-right activities online, whereas Antifa and anarchist groups had a massive online presence. In an analysis of keywords used by supporters of both groups, between noon on Aug. 10 and noon on Aug. 13, Antifa and counter-protest group mentions far exceeded those of rally supporters in postings, content, and hashtags by almost 14 to 1 for the top post related to each (“Antifa” and “UniteTheRight”). The total volume of counter-protest posts in the sampling both for and against Antifa made it seem like the self-proclaimed “white civil rights” rally didn’t even happen.

But it did happen, of course, and hundreds of counter-protesters, including several Antifa and anarchist groups, showed up in force in Charlottesville. They organized strategically, fanning out along the cordoned areas. Some of the most hard-line counter-protesters harassed police and journalists, resulting in at least a few arrests. Some also showed up with protective gear, medical kits, and makeshift weapons, ready for confrontation.

Counter-protesters were similarly outfitted and even more organized in D.C., where two dozen neo-Nazis and white supremacists, including Jason Kessler, one of the main organizers of the Charlottesville rally in 2017, showed up under heavy police protection (much to many people’s anger). The final tally of counter-protesters isn’t clear, but some estimates put the number around 5,000. Organizing websites indicate that approximately 40-plus groups showed their support and pledged to come; as with the Charlottesville rally, some of the organizers suggested that if you can’t join the counter-protests in D.C., then you should “occupy an ICE office, shut down a police station, or demonstrate at the home of a local racist, ICE agent, or prison profiteer”—a message that underscores how people beyond just neo-Nazis have been swept up in some far-left activities.

What This Means for the Future

With the massive failure of the recent D.C. rally to bring together a strong group of alt-right members, the online activities of far-right and far-left groups will likely shift. The alt-right seems to be going further underground, to more secure, invite-only chat rooms via encrypted apps. This will make it harder to monitor by advocacy groups like the Southern Poverty Law Center. Its rhetoric will likely continue, albeit at a more terms-of-service-friendly pace. How much this will stem its behavior, though, is anyone’s guess. A keyword analysis of the approximately 500,000 Discord chat logs showed that the top five to 10 words used were either racist, bigoted, anti-Semitic, or related to fascism. Some researchers argue that this language still dominates conversations, and that calls to action persist, even if they avoid outright threats of violence.

The far-left, meanwhile, will probably continue largely unabated on more open platforms like Facebook, Twitter, YouTube, and Vimeo. It will also probably use its relative online freedom (the Southern Poverty Law Center doesn’t consider Antifa a hate group, and its activities have so far avoided terms-of service-violations) to openly recruit and promote its own agenda, alongside anarchist and socialist groups, with whom it’s now openly affiliating.

Doxxing on both sides will probably escalate further. And it’s likely that the fake accounts being set up by both anti-Antifa and anti-Nazis to troll each other will be used by adversarial actors, such as Russia, to breed discord and sow confusion, as happened before Charlottesville 2017. In all that is a cautionary tale—of how each side’s perceived success only adds legitimacy and thus fuel to the fire. As these groups grow in size and boldness, it’s crucial to understand and keep a close watch on both extremes—and the ways in which future interactions between them may lead to violence.