How Do You Weather a Short-Term Financial Crisis? 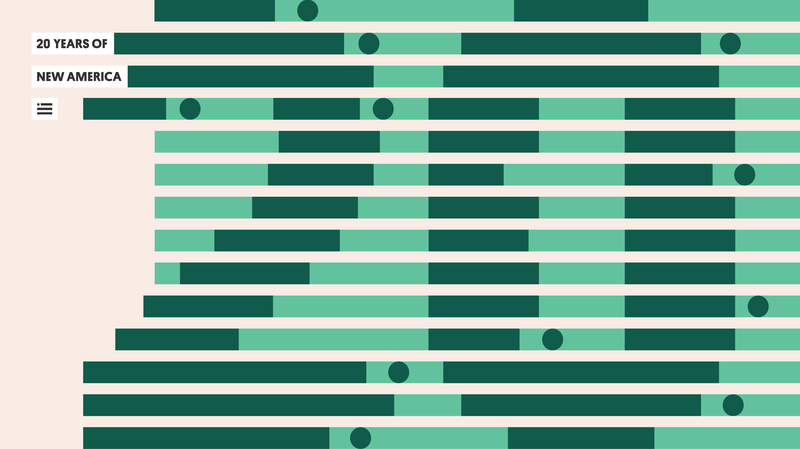 This article is part of an occasional series that highlights some of the big ideas New America has influenced over its 20-year history. Read Anne-Marie Slaughter’s introduction here.

America just suffered the longest government shutdown in its history. And while federal workers appear to have avoided another, they’re feeling freshly vulnerable that they could be shut out of work again.

But government shutdowns are just one of the many types of income shocks that Americans experience. Loss of a job, change in family composition, the onset of a work-limiting disability, and a major illness are all examples of other types of shocks. And while these receive far less media attention, they occur far more frequently: Research shows that 96 percent of Americans experience four or more income shocks in their lifetimes.

The shutdown has also taught us that it’s is not just the poor who are financially insecure, or those without a job. It’s also middle-class Americans. This observation aligns with research that shows that, between the ages of 25 and 60, about 62 percent of Americans will struggle for at least one year below the 20th percentile of income distribution.

Put another way, America will never be great, in any sense of the word, if its citizens can’t even cobble together enough wealth to make it through three months of no pay. So, how might we make moves toward a wealth-building agenda that includes everyone?

One place to start is with Children’s Savings Accounts (CSAs) programs. These are financial vehicles that seek to build wealth for children, typically starting as early as birth or kindergarten. There are currently 54 CSA programs serving some 382,000 children in 32 states. Not yet included in these figures is Pennsylvania; this year, the state adopted bipartisan legislation that, starting in 2019, will provide each of the approximately 140,000 children born annually in the state a CSA with a $100 scholarship grant.

Of course, today’s growing economic inequality means that CSAs alone aren’t enough to vanquish this disparity. Indeed, even a progressive savings instrument can’t single-handedly help low-income families that have been behind from the start, compared to children who have the advantage of entrenched, generational wealth.

Still, the power of CSAs doesn’t lie exclusively in their ability to pay for postsecondary education. Research and empirical evidence shows that, by changing the way parents and children think about their futures, they also help cultivate a college-bound mentality, improve educational outcomes, encourage college completion, and bolster post-college financial health.

This potential across so many different metrics is what makes CSAs stand out from, for instance, Senator Cory Booker’s American Opportunity Accounts proposal. More specifically, Booker’s proposal calls for automatically giving every child born in the United States an account, starting with a $1,000 deposit. Beginning in year two, every child at or above 500 percent of the federal poverty line would receive $0, and children at less than 100 percent of the federal poverty line would receive $2,000; he estimates that, by age 18, the poorest children would have about $46,000 in their accounts. My preference would be for systems that don’t rely purely on government contributions, because the social and psychological effects of promoting child and parent engagement and investment in CSAs are themselves deeply valuable. Still, Booker’s proposal is certainly a bold vision. Paired with a financing mechanism like Senator Elizabeth Warren’s wealth tax proposal, it could move us toward the more even distribution of the financial pie that our country so badly needs.

Fortunately, we may not need to wait to find out if Booker or Warren’s ideas will carry them to the presidency and become law. The tools necessary to build on the small-dollar CSAs that are being deployed in places like Pennsylvania are already available—and waiting to be put to use.

One avenue to inject additional money into these accounts is to use rewards card programs that build up savings. In these programs, every time someone in the family makes a purchase using their card, the family receives a rebate (between 1 and 4 percent) that goes directly into the child’s CSA. This happens regardless of whether the purchase is made via cash, debit card, credit card, or electronic benefit transfer. Unlike other asset-building programs (for instance, the EITC tax time saving) that rely on people’s limited resources for survival, the rewards card program transforms spending into saving. These programs are currently being tested in randomized control trials in two CSA programs in the Midwest, and are showing early promise.

Another way to transform small-dollar CSAs into tools for fighting wealth inequality is by awarding scholarships early. As young as age 11 or 12, the College Board recommends supplementing the Pell Grant program by opening savings accounts for children who would likely be eligible for Pell once they reach college age, making annual deposits of 5 to 10 percent of the amount of the Pell Grant award they’d be eligible for. Indeed, billions of dollars are provided every year in educational scholarships; if some portion of those funds were placed in children’s accounts much earlier, it’d have the dual effect of building those children’s college-going identities and providing funds that could grow into more than just tuition payments.

In addition, we could repurpose existing government and business spending. P-Card programs are one example of how this can be done. They’re government or business credit cards that provide governments as well as employers the opportunity to receive a rebate on purchases made with a government credit card. A city in California is in the process of negotiating rebates with its vendors so that every time the city makes a purchase using its P-Card, a 1.51-percent rebate would go into a general fund for establishing CSAs. This fund is estimated to gross up to $15 million annually. Similar arrangements could be made with businesses, too.

What the recent government shutdown underscored is the sheer insecurity faced by ordinary Americans. In this light, it’s time to have an honest conversation about how we can ensure that Americans—all Americans—have enough wealth to weather any financial emergency.