How Did North Dakota Become the Crown Jewel of the Internet in the Midwest? 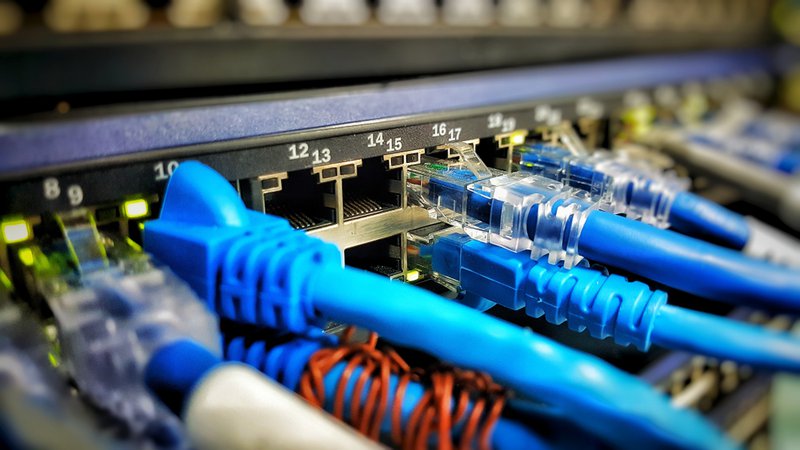 There’s a strand of coastal conventional wisdom that views anything west of the Appalachian Mountains and east of the Sierra Nevada as impossibly outdated. Technology is born in Silicon Valley and Washington state, flies to New York City and Washington, D.C., and 20 years down the road, shows up for use on Main Street—if the residents in these “flyover” states are lucky. If you believe that, I encourage you to play the video game Fortnite in Grand Forks, North Dakota, where internet speeds are nearly three times the national average. You’d be in for a surprise. 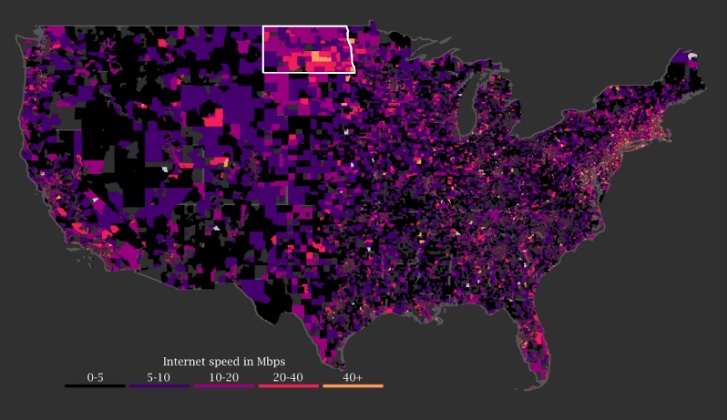 Even if I hadn’t outlined it on the map above, North Dakota is easy to spot because it visibly outperforms its neighbors. Most Midwestern and Mountain states are dominated by connection speeds between 0 and 20 Mbps, with many census tracts—the Census Bureau’s name for the next-smallest area after counties—on the lower end of that range. North Dakota, however, sees rural tracts breaking 40 Mbps. For rural communities, many experiencing related population loss and slow job growth, establishing high-speed internet is now a necessity, much the same way the rural electrification of America was in the 1930s and ’40s. Like electricity, faster broadband has well-documented economic effects, with, among others, a 2013 study estimating that a 4 Mbps increase in internet speed increased annual household income by $2,100.

Put another way, the Peace Garden state looks overwhelmingly brighter because an overwhelming percentage of it is brighter. A higher percentage of its census tracts, the smallest visual units on the chart, have high broadband speeds. With brightness approaching uniformity, North Dakota is different from most coastal states, which typically have fast internet in their major cities, suburbs, and exurbs, but slow internet everywhere else.

Compare, for instance, the percentage of census tracts with speeds above 20 Mbps in North Dakota to the percentage in its southern twin, South Dakota. I’ve thrown in a coastal state, Virginia, for additional comparison. Up until about 2016, North and South Dakota had similar rates of census-level high-speed internet adoption. In 2016, though, North Dakota’s tract speeds increased dramatically, turning it into the crown jewel of the internet in the Midwest. 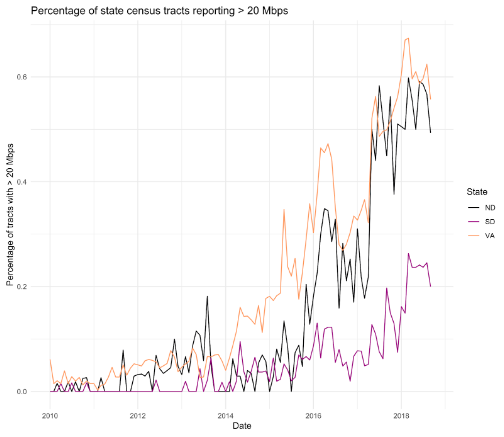 What happened? What changed in North Dakota—and how might that plan be copied and pasted throughout the rest of rural America?

First, the federal government helped. In 2009, Congress and former President Barack Obama passed the American Recovery and Reinvestment Act to stimulate the economy. That law created the Broadband Technology Opportunities Program (BTOP), which invested significantly in North Dakota’s broadband infrastructure. The BTOP created a state broadband program office within the North Dakota Information Technology Department, paid to install hundreds of miles of high-speed fiber cable, and connected several universities in North Dakota to a broader network of high-speed “anchor networks.” So, unfortunately, while funding an infrastructure bill that includes broadband is one of the few projects both Democrats and Republicans will stump for, it’s unlikely that even a bipartisan bill will give carte blanche to expand internet infrastructure the way recovery efforts after the Great Recession did.

But North Dakota’s internet surge has an additional explanation, and this one is easier to reproduce. Rural cooperatives, or co-ops, made up of local service providers are major internet players in North Dakota. The Institute for Local Self-Reliance released a map of rural co-op internet coverage, and on it, North Dakota is as much an outlier as it is on the speed map. 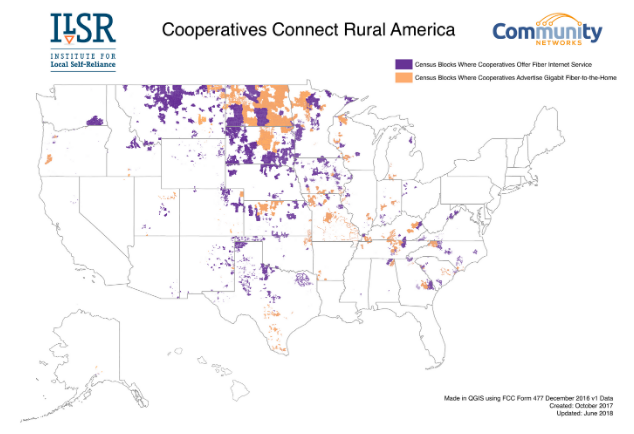 Co-ops including the Dickey Rural Telephone Company, the Dakota Central Telecommunications Cooperative, and a co-op of co-ops, the Dakota Carrier Network (DCN), cover much of North Dakota, and provide broadband to many of its residents. Like electric co-ops that brought light to rural America when bigger companies deemed it unprofitable, and telephone co-ops that did the same decades later, internet coops provide a modern keystone technology, one widely available elsewhere, to rural communities. Being able to download millions of documents in a few seconds or video chat with five people in five countries in real-time are stupefying feats of technology made casual by their decade of urban availability. Co-ops are doing the good work of making the magical mundane by turning it commonplace.

Part of co-ops’ effort involves close connection with the state government’s closed broadband network STAGEnet. DCN has built out and upgraded STAGEnet, helping to bring high-speed internet to government buildings and schools, with a project in place to make North Dakota the first state with gigabit connections in all schools. 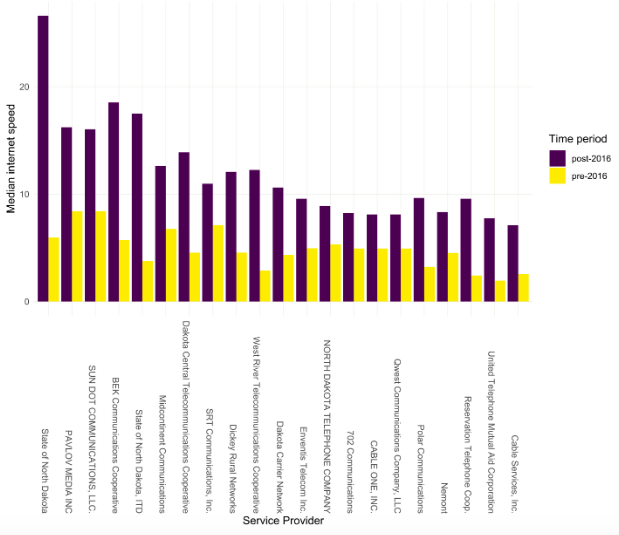 Indeed, a breakdown of internet speeds by service provider before and after 2016 confirms both that co-ops and the state government have played a huge role in the changes, and that the North Dakota internet market is characterized by co-ops. Of the providers whose customers ran over 5,000 tests both before and after January 2016, the largest improvements were seen by co-ops and the state of North Dakota (STAGEnet). Of these 21 companies, only seven weren’t involved in cooperatives.

North Dakota’s unique telecoms history has led to internet connectivity and speeds that other largely rural states have yet to achieve. The cooperative nature of North Dakota’s telecoms industry is a central part of that success story. It’s not worth suffering another Great Recession to secure better internet. But neither is it necessary. A more cooperative internet marketplace seems to do the same just fine.