How Classrooms Stymie Women of Color in STEM 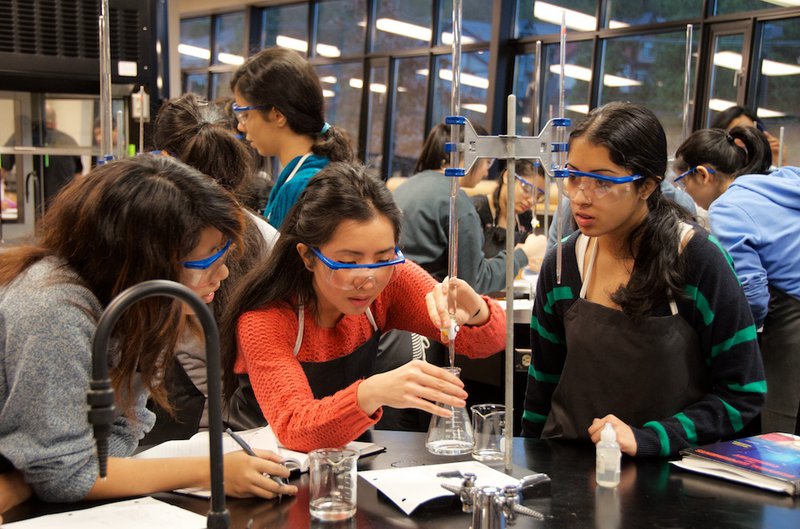 Whenever I told people what I studied as an undergraduate, I was met with a blend of surprise and confusion, as people tried to figure out if this news was “impressive”—since I am a woman—or expected—since I am Asian.

It’s no secret that there are fewer women in the science, technology, engineering, and math (STEM) fields than there are men. Plenty of research around this inequality points to the ways in which STEM fields are often framed to be for “naturally smart,” “clever,” or “brilliant” students—a category that young girls and women don’t often see themselves fitting into. I saw this dynamic play out frequently in the math classrooms where I was a student, but also in the ones where I was a student teacher. Unfortunately, this kind of classroom culture, which is both gendered and racialized, too often prescribes which students “belong”—and therefore succeed—in STEM classrooms.

Given the dubious signals from the current administration this week about its support for women and students of color in STEM fields, it’s important for us to be critical of STEM education efforts—which often overlook the subtle ways that our schools, teachers, and culture continue to perpetuate STEM disparity in classrooms.

In my own math classes, the women (sizable in numbers at UC Berkeley, but still underrepresented) often started their questions with an apology for speaking up or for not understanding the content. When a professor asked students to share how they completed a problem, I noticed that my female peers qualified their work before presenting it, beginning with phrases like “It’s probably wrong, but… ”; “I don’t know if this is right, but… ”; and “I’m not really sure, but…” Even when our male peers were skeptical of their own work, they usually presented answers and asked questions with a firm confidence.

I saw similar patterns in my student teaching. Many of the girls I worked with in a sixth grade Bay Area classroom told me that they weren’t “good” at math because they weren’t “smart.” Why did they think this? To them, being “good” at math or being “smart” meant that they should be able to finish their work quickly, do basic numeric operations in their heads (even with large numbers), and get most of the problems correct during timed activities. If they took a little longer, tried different ways of doing math, used different academic vocabulary, or needed to use scratch paper, they labeled themselves “dumb”—even if they got the correct answers.

Most of my students were either 10 or 11 years old. While I was surprised at first that students so young were already so adamant about labeling their intellectual capacities, a recent study from Princeton University shows that students adopt these gendered mindsets as young as age 6.

In other words, by the time they are 6 years old, young girls already associate brilliance and natural intelligence with male-ness, and they subsequently dissociate themselves from being as likely to be good at math and science.

Of course, some girls are able to overcome these stereotypes and succeed in STEM fields. However, many don’t, and studies have shown that this difference is often a racialized one.

As an Asian-American student, I was told from a young age—both explicitly and implicitly—that “Asians are good at math.” Explicitly, I heard this phrase from many of my fellow classmates; my teachers always applauded my work ethic and classroom demeanor, implying that I was a “good,” “smart” student. Implicitly, I never felt racially underrepresented in my classrooms, and this held true in college.

But many students of color—particularly black and Hispanic students—receive messaging that’s quite the opposite. Being a “good student” in the eyes of teachers can be racialized—often unintentionally. For instance, studies have shown that young black boys are far more likely to be disciplined by preschool teachers than young white boys—even for similar behavior. Similarly, young black girls are often misconstrued as “poor students” for being too “loud” or “talkative” in the classroom; essentially, they are penalized for not assimilating to normative classroom culture. This happens to young Latino students as well. Classroom cultures—particularly STEM ones—are too often geared toward white, heteronormative masculinity. Students who do not fit these molds are implicitly taught that they do not belong in academic settings. As a result, math and science, which are often seen as more “academic” subjects than the humanities and social sciences, quickly feel out of reach for many students of color.

For students who hold both female and black or Latino identities, the idea that they could be “good” or “succeed” at math becomes far-fetched early on in their academic careers due to the ways in which classroom culture shapes their sense of belonging in school. I certainly saw this as a student teacher in my own classroom. Unfortunately, the negative effects of this persist into the rest of their academic and even career tracks, presenting a disparity that becomes particularly hard to combat by the time students get into late high school and college.

As I reflect on what it means to be an Asian-American woman in mathematics during this Women’s History Month, I find myself asking: Would I like to see more women in STEM fields? Of course. But more than that, I want to see both young girls and students of color—and especially young girls of color—stop believing that they aren’t smart enough to be good at math and science. Rather than teaching them to be brilliant, or implying that they are not, let’s create a culture that helps them—and us—see that they already are.