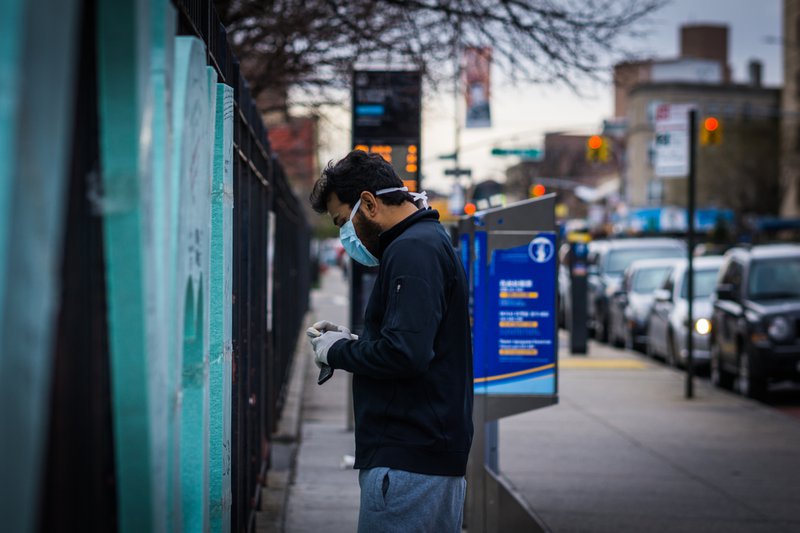 Rebecca Mae had been feeling sick for days when she was sent home from her job as a San Antonio respiratory therapist, and told not to return until she tested negative for the novel coronavirus.

Though she immediately called her doctor, it took five days to schedule a test, four to find out she was negative, and another six before she got clearance to return to work last week. In all, she spent fifteen feverish days burning through every minute of paid sick leave she had accrued, and more than a week of vacation time, she said.

Paid time off for workers affected by the pandemic—which has overwhelmed hospitals and ground the economy to a halt—is a key protection in the emergency legislation passed by Congress in March. Effective last week, the act requires businesses with fewer than 500 employees to give ten days of paid leave to a person who is or may be sick with the coronavirus, caring for someone who is, or is unable to find childcare. Employers will be reimbursed with tax credits.

But it allows for two notable exemptions: emergency responders and health care providers like Mae — a broadly defined group that extends to anyone who works at a doctor’s office, nursing home, pharmacy or even a medical school, according to Department of Labor guidance.

“I know every minute, every day I could be exposed,” said Mae, who is being identified by her first and middle names because she fears professional retaliation.

With an empty bank of sick leave, she’s scared for what will happen if she falls ill again.

“I can lose my house, my vehicle, everything, ” she said.

Experts say the exemption is meant to avoid depleting the workforce on the frontlines of the pandemic, as hospitals with COVID-19 patients have had to send home dozens of healthcare workers, leaving them shorthanded. Critics, though, say it only puts nurses and doctors, who have already complained about their lack of protective equipment, more at risk of getting ill or spreading the respiratory virus to other patients.

“If we have all of our healthcare workers getting sick because somebody didn’t stay home because they didn’t have the paid time to do that—that seems more problematic,” said Julie Kashen, director of women’s economic justice at the left-leaning Century Foundation.

Democratic lawmakers have already criticized the Labor Department for drafting regulations that “potentially strip” the new paid leave protections from healthcare workers by using a definition so expansive it includes “practically any worker in the healthcare supply chain.”

And the Texas Nurses Association has urged employers to provide paid sick leave to health care providers, even though the new law doesn’t require it.

“Nurses are on the frontlines of this pandemic every day, and they need to be able to take time to recover, avoid patient interactions, and improve their mental wellbeing without worrying about financial pressures, feeding their families, or paying their bills,” Chief Executive Officer Cindy Zolnierek said Friday.

The Labor Department has urged employers to “be judicious” in exempting their workers. The agency did not respond to written questions.

Cisco Gamez, a spokesperson for the Texas Workforce Commission, said employees who are asked to self-quarantine can take medical leave “under whatever paid leave policy the company has,” and that the agency “has no jurisdiction” over who qualifies.

Mae’s not the only healthcare worker who has found themselves quarantined at home without paid time off.

A San Antonio nurse working in home healthcare said she is struggling to pay her mortgage and insurance after being on unpaid leave for a week, waiting for a test result to come back. She doesn’t have sick leave to use because she spent several weeks caring for an ill grandchild, she said.

Another woman who works at a nursing home in Longview told her employer she might have been exposed to someone with COVID-19. She was sent home, until the person faxed over documentation showing they did not have the virus.

Both asked for anonymity because they did not have authorization from their employer to speak to the media.

“I work in a nursing home: they have to take every precaution to keep our little elderly residents safe so I don't blame them for sending me home,” the second woman said. “I was told that they weren't required to pay me in that circumstance. It probably would have been different had I actually been tested personally and diagnosed.”

A Shortage of Medical Staff

With the number of coronavirus cases surging, and disturbing reports of mass infections in nursing homes, many healthcare facilities are taking extra precautions to protect their elderly or medically vulnerable patients. That includes screening everyone who enters the facility with a questionnaire and a temperature check—and asking symptomatic healthcare workers to quarantine at home.

At the same time, officials are trying to head off a shortfall in medical staff if coronavirus cases surge.

The U.S. Centers for Disease Control and Prevention has recommended that healthcare facilities where the virus is spreading “make contingency plans for increased absenteeism” caused by employees or their families getting sick.

The agency has also suggested doctors and nurses exposed to the virus might have to quickly return to work if there are staffing shortages that need to be staunched.

Current CDC guidance says providers confirmed or suspected to have COVID-19 should not come back until they receive a negative test result. Alternatively, they can return seven days after their symptoms appeared, and three days after they’ve recovered.

The pandemic has exacerbated what was already a problematic shortage of nurses in Texas, particularly working in long term care, said Kevin Warren, head of the Texas Health Care Association, an organization that represents skilled nursing, post-acute care and assisted living facilities.

Employees out sick puts stress on colleagues who have to work more hours, take care of more patients, and cover more shifts, he said. Facilities confronting the outbreak must try to balance sending ill people home to prevent the virus from spreading, while ensuring enough workers are there to carry the load.

Texas employment lawyers say the act gives medical facilities flexibility to remain operating during the pandemic, and that they expect employers will try to protect their workers and provide safe health care. Employees can still use paid time off or sick leave that’s available to them separate from the emergency legislation.

“There's this category of workers who, unfortunately and sadly, come under fire because that's the nature of their job,” said Teresa Valderrama, a partner at the firm Fisher Phillips. “While ordinary citizens have a right not to be shot at, unfortunately our combat troops—part of their undertaking in defense of the rest of us in this nation—is to take on the risk that they may come under fire. And that’s a little bit like what’s happening here.”

Carrie Hoffman, a partner with the firm Foley & Lardner LLP, said she thought the Labor Department’s instruction to use the exclusion “judiciously” meant that employers might deny a healthcare worker’s request to stay home because they have no childcare—but grant it if they’re actually ill.

“You [an employer] can exempt them; it doesn't say you have to exempt them,” Hoffman said.

The law also offers up to 12 weeks of paid childcare leave, which healthcare providers and employees of small businesses can be excluded from. Small businesses, with fewer than 50 employees, can elect not to provide childcare-related sick leave, as well, if it would jeopardize their operations.

“We’re not allotted the sick time off?”

Mae, the respiratory therapist, can’t understand why healthcare workers are not included: “They’re the ones that have the highest chance of getting sick,” she said.

When she returned to work Wednesday, she felt a “looming fear” among her colleagues. People are “hyper vigilant; afraid to touch anything.” Each is allotted one loose-fitting surgical mask, which they put into a paper bag at the end of the day and wear again the next. They can request a new one after four to five days, said Mae, whose job involves operating respirators and suction-ing “huge amounts of infectious mucus.”

Her employer’s leave policy, circulated last week, says healthcare workers can use accrued sick leave and vacation time if they’re sick with the virus. If they run out—or if they test negative, don't have vacation hours and can’t get a doctor’s note—they must take unpaid leave.

Mae worries about new employees who haven’t had time to build up sick leave or who have exhausted their hours.

“We’re the ones working … trying to be able to save these other people, yet we’re not allotted the sick time off?” she asked. “You work hard for that [paid time off]. You have plans for that. You should never have to use your paid time off because you’re unable to work because you’re sick.”