Georgian Democracy: An Island, Not a Beacon 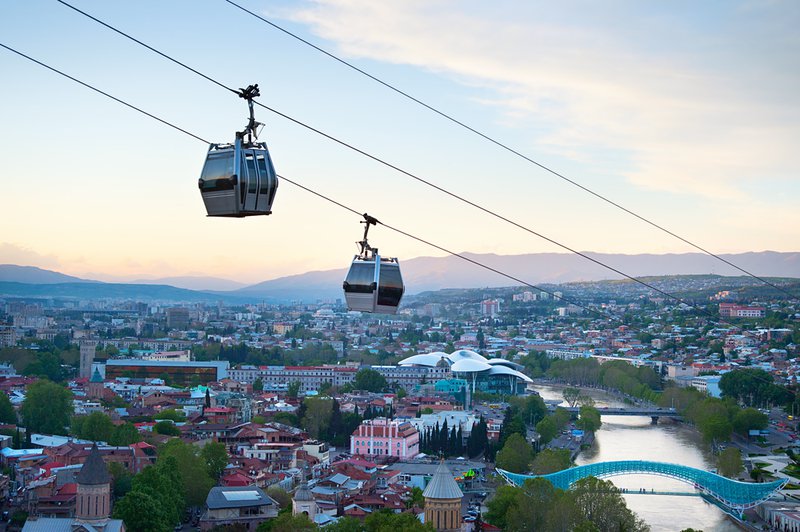 Hailing a country or region as democratic is not enough to make it so.

As an example: Georgia held its parliamentary elections last week. These served as the country’s fourth nationwide contest since its first post-independence constitutional transfer of power in 2012. Despite some pockets of irregularity and controversy—isolated  attacks on polling stations, and a smattering of administrative issues—the broad local and international consensus indicates that it was a fully free and fair election, and marks some welcome consolidation of the country’s democratic institutions. Georgia’s continued political progress makes it easily the most robust and lively democracy in its immediate neighborhood. But with Tbilisi’s longstanding quest for Euro-Atlantic integration looking increasingly dim amid Western strategic and civilizational protectionism, Georgian democracy looks increasingly like an island, and not the beacon of Western-style liberalism as it was once hailed.

It was 2005, and the era of the U.S. “freedom agenda” was in full swing. On the heels of the Rose Revolution and former president (and now governor of Odesa) Mikheil Saakashvili’s assumption to power just some 18 months prior, Georgia had curried favor in Washington for its eager contributions to the US Global War on Terror and had been seized upon by the Republican White House as an exemplar of—and vindication for—its foreign policy.

Speaking to an enthusiastic throng in Tbilisi, Georgia’s capital, then-U.S. President George W. Bush hailed the country as a “beacon of liberty”—a startling and gratifying endorsement from the sitting president of the world’s lone superpower. It was also a gross and potentially damaging over-exaggeration, one which elevated Georgia to a standard it neither met nor deserved at the time.

In the pantheon of premature declarations, President Bush’s gushing in Tbilisi was hardly even the most problematic statement of his presidency. However, Bush’s rhetoric—and his administration’s eager embrace of the then-ruling United National Movement (UNM)—underscored a yawning disconnect between the actual state of Georgian political development and Washington’s willful maintenance of a very particular narrative of “liberty” unmoored from realities on the ground. When President Bush made his speech in May 2005, the UNM had only recently wrested power from ex-president and former Soviet foreign minister Eduard Shevardnadze’s kleptocratic regime. Yet even then, the UNM had already begun to engage in excessive, even unconstitutional behaviors in the course of their state building agenda.

By November 2007, popular unease with the UNM’s imperious style metastasized into mass protests, which the government violently dispersed—though not before it raided and commandeered a popular opposition television station. Over the course of its eight-year reign, the UNM routinely expropriated land and property, its prison populations swelled, the media was tightly controlled by the state, and the country’s judiciary effectively served as arms of state coercion. By the time it left office following shock 2012 elections, Georgia was rated by various international assessments as no more free than when it entered power following the 2003 Rose Revolution—and less free in many important respects.

Four years since those seminal parliamentary elections, the vision that President Bush so casually and tantalizingly dangled in 2005 seems increasingly like a reality. The broad international and local consensus of last week’s elections suggests an overall contest that was clean, free, and fair. The campaigns featured an array of choices appealing to all corners of Georgian society  and, despite several concerning but ultimately minor imperfections in the process, the elections highlight the maturation of Georgia politics and the establishment of what most would regard as a broadly functioning, if still-volatile democracy.

Preliminary results showed the ruling Georgian Dream (GD) maintained its hold on power with just under half the vote at 48.67 percent, ably besting the UNM, the leading opposition party, which garnered 27.11 percent. The nationalist-populist Patriotic Alliance just eked by the five percent threshold reportedly only by a few dozen votes, meaning that it will be awarded six seats in the next parliament, and will be the only party aside from GD and the UNM to win enough support to enter the national legislature. Quirks in the Georgian electoral code mean that almost 20 percent of votes distributed among a variety of smaller parties will not have a voice in the next parliament.

The electoral outcomes carry their own weighty narratives. By the look of it, the Georgian electorate opted for continuity over a return to UNM rule or an investment in the fortunes of one of the smaller parties, despite a stubbornly sluggish economy and longstanding difficulty inclusively distributing economic gains even in times of high growth. Yet for all their shortcomings, GD’s centrist economic platform and what has proven to be a pro-West foreign policy was seen as broadly preferable to a UNM that remains more comfortable with the politics of revolution than retail democratic engagement, and has struggled accordingly to expand beyond its loyal but limited political base. For the most part, however, the breakdown of the results is rather less meaningful than the administration of yet another successful national election and the apparent development of Georgian democracy.

But if Georgia has at long last come to resemble the democracy that President Bush prematurely promised over 11 years ago, it has done so while its neighbors have decidedly moved in the other direction. Russia and Azerbaijan are both certifiably authoritarian states, while Turkey and Armenia, though appreciably more pluralistic, are governed by autocratic, dominant ruling parties. None of Tbilisi’s closest neighbors today demonstrate the qualities that make Georgia a relatively vibrant democracy. In this sense, Georgian democracy is not a beacon so much as it is an island—isolated and removed in an unforgiving sea.

Political stagnation and regression in the region is one major culprit for Georgia’s increasing democratic isolation, but it has not been helped by the hardening, thickening demarcations that divide the Euro-Atlantic West from the Eastern European and Eurasian regions menaced by Russia’s domineering influence. In plainer terms, Europe and successive U.S. administrations failed to make good on their outreach to Georgia, and the countries they expected to follow it into the West. The gradual death of Euro-Atlantic conditionality—the policy linking the prospect of Euro-Atlantic integration with substantial local reforms—has left Western states with few means to exercise leverage. Eastward expansion, meanwhile, has been suspended seemingly indefinitely.

The young democracy in Georgia is finally the impressive example for the region it was once hailed to be, but it still needs Western support to fulfill its potential and to maintain a positive trajectory. The UNM’s disappointing finish is not sufficient reason on its own to eschew democratic processes; and GD’s commanding, if not overwhelming, electoral victory is a genuine reflection of the Georgian electorate’s choices, but it is not a mandate for political domination—a fact that is sometimes sidelined in the post-election afterglow. The U.S. and Europe have a role to play in reinforcing and reiterating the acceptable frontiers of domestic democratic conduct, and should push for the establishment of strong institutional bridges to Georgia in the glaring absence of democratic peers in its immediate neighborhood.

President Bush’s Tbilisi speech in 2005 seemed to indicate that Georgia had already done what it needed to do domestically—“mission accomplished.” But as the intervening years demonstrated, there was still much to do in Georgia. To its credit, Georgia has managed to do much of it—to accomplish the mission the West already accepted as largely fulfilled. Georgia’s political development has made great strides, and the country can reasonably be considered a democracy. But if the roiling internal politics of the U.S. and Europe in recent years have shown anything, it is that democracy is not an end state so much as a continuous work in progress. In that endeavor, Georgia and the West still need each other—perhaps now more than ever, and especially if Western leaders hope to turn it back into the beacon they once assumed it always would be.