The Fuzzy, Tangled Politics of Knitting 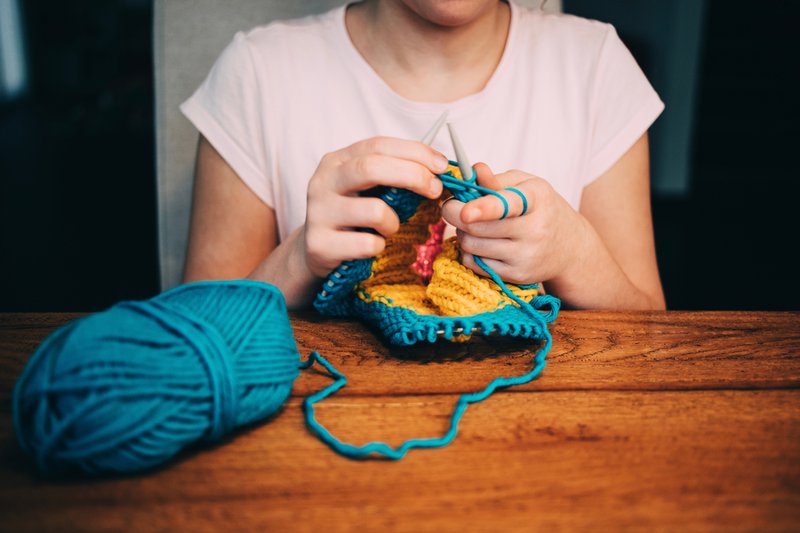 Karen Templer, owner of the high-end craft accessory business Fringe Supply Co., recently published a cheerful blog post about her upcoming trip to India, and overcoming her anxiety of visiting a faraway place that, to her, seemed otherworldly.

“I have hurt, angered and disappointed a lot of people this week,” she wrote, explaining, “I perpetuated the harmful notion that Indians (and POC in general) are ‘other,’ or even to be feared. People who are the target of racism every day were rightly offended by it, as were others. And I am so sorry.”

Suddenly, knitwear designers and bloggers on Instagram—so many of whom are young, white women—began openly discussing privilege within the knitting community, and the presence and absence of people of color in fibre arts. In post after post, bloggers urged their followers to “educate ourselves,” to “listen to those speaking up,” to “try to be more inclusive.”

Conversely, in a post about the controversy on r/knitting (a Reddit community of more than 250,000 members), the most popular replies dismissed the entire conversation. “I’ve never heard of knitting blog personalities or celebrities. ... I’m interested in the projects people make and the techniques & materials used. Not their personal stuff,” the top comment read. Others bemoaned “celebrities” bringing politics into their hobby, or claimed colorblindness. One commenter wrote, “I’m in it for the pretty things and relaxation and fun. I’m sorry that the knitting community feels less welcoming to POC, and all I can do, I think, is treat them just like regular people if I encounter them.”

Yet despite many knitters’ disavowals of the political, the fact is that underneath the mittens and baby blankets, the politics of race and class shape how we knit—and which knitters get the most attention. In this light, the impulse of many white knitters to push those politics away says a lot about what and whom we value in our craft.

To see where I’m going with this, recall the famous sweater scene from the 2006 film The Devil Wears Prada, in which Andy (Anne Hathaway) laughs at what she perceives to be a fashion frivolity—“both those belts look exactly the same to me,” she says—only to be taken to task by Miranda Priestly’s (Meryl Streep) calculating recitation of the history of Andy’s lumpy blue sweater.

Priestly chastises: “You think this has nothing to do with you,” adding that though Andy may have randomly picked her sweater, its cerulean color originated in a top fashion designer’s collection four years ago, after which it was co-opted by other designers, before filtering down to department stores. Her deeper point is that a small group of powerful individuals can control what consumers perceive as desirable—and those consumers may not even know it.

Just like in fashion, what knitters choose to make has history and political implications. Think of it this way: If you select a pattern from a designer, you may have found that pattern because it was curated on the Ravelry forum homepage, which more than 6 million knitters visit each month; that designer may be sponsored by a yarn company; the designer chose a model for the promotional photos; and knitters, like me, give free advertising to those designs when we post our finished objects on forums or Instagram, inspiring others to make the same garments. Now, imagine the possibilities if you were to increase representation and inclusion—if the yarn company sponsored a designer of color, if Ravelry curated patterns by and featuring people of color, or if the designer used a non-white model: Representation of knitters of color would increase because those patterns would be shared, created, and circulated, and knitting would be seen less as a “white” hobby. This, in turn, may make more people of color feel welcome.

It’s exactly because of these dueling pressures and perspectives that, looking ahead, I hope that more people like me will make better efforts to do right by our oft-overlooked knitting peers.

What we wear—or, in this case, knit—can be also a tool of politics and protest. Thousands of women made pink pussyhats for the Women’s March on Washington and knitted wombs in support of pro-choice laws. But the time and cost of fibre arts also underscores racial and class divisions. Going back further, in the 19th century, “middle-class and wealthy white women were free to take up needlework selectively, and for either leisurely or political causes, while lower-income or marginalized women turned to it for income and survival.”

These days, it’s largely impossible to survive on knitting alone. But that hardly means that we shouldn’t pay attention to the subtler ways in which a “fun, relaxing” hobby reveals whose labor we value more. Unless, like Karen Templer, you run a successful business selling $100 tote bags to other knitters (disclaimer: I received one of these totes for Christmas, and love it), knitting probably won’t feed and clothe your family. Knitting a simple sweater can take 100 hours and cost upwards of $70 in materials. Why don’t you sell on Etsy or at the farmer’s market? well-meaning friends ask. Well, would you pay $500 for a handmade sweater from me? Because that’s how much it’d cost if I charged half the national minimum wage per hour, plus the cost of materials. At the least, we ought to acknowledge and respect the work that goes into every stitch. (And, no, it doesn’t matter if you pick a pattern based “purely on technique”—a real person made that pattern, and is trying to build a brand or business, regardless of whether or not you think about it.)

In a similar vein, the politics of class have persisted. The cost, in time and money, of knitting means that it’s not as accessible to low-income people, who may be working multiple jobs or taking care of kids, while I’m knitting on my couch watching Netflix. You can make a hat in just a couple days, but it’s more economical for most to pop into H&M and buy a chic beanie for $5. And even if you knit on the cheap, you run into the social politics of knitting. Knit with cheap yarn from JoAnn Fabrics and you’ll probably experience some snobbery on a knitting forum.

Crucially, in the knitting community, I’ve never been confronted with feeling like I don’t belong. That’s because, well, everyone basically looks like me—mostly young, white, well-off, cis women. Until the fallout over Templer’s post, it hadn’t occurred to me that all the pattern designers I followed are white. I could only recall one major knitting magazine (Pom Pom Quarterly) regularly featuring diverse models. In other words, my privilege and financial stability had afforded me the freedom to invest in knitting without realizing that my obliviousness to its politics was part of a larger problem.

Knitting is a warm, fuzzy hobby about self-care and love for others, so much so that it shocked white knitters to see stories from people of color who have faced discrimination in specialty yarn shops, or who decided to point out the lack of representation in mainstream knitwear design. Even more shocking was the belief by white knitters that this had nothing to do with them.

Yet it’s exactly because of these dueling pressures and perspectives that, looking ahead, I hope that more people like me will make better efforts to do right by our oft-overlooked knitting peers. A few weeks after Templer’s post, the controversy has, in some ways, died down; people are back to sharing their sweaters and scarves “without being political.” But the conversation around representation in fibre arts has fueled greater awareness among an admirable many, and encouraged more people (including me) to actively seek out knitwear designers of color. Knitting is more than a fun, relaxing hobby—like anything personal, it’s also deeply political. I hope that spark lasts.