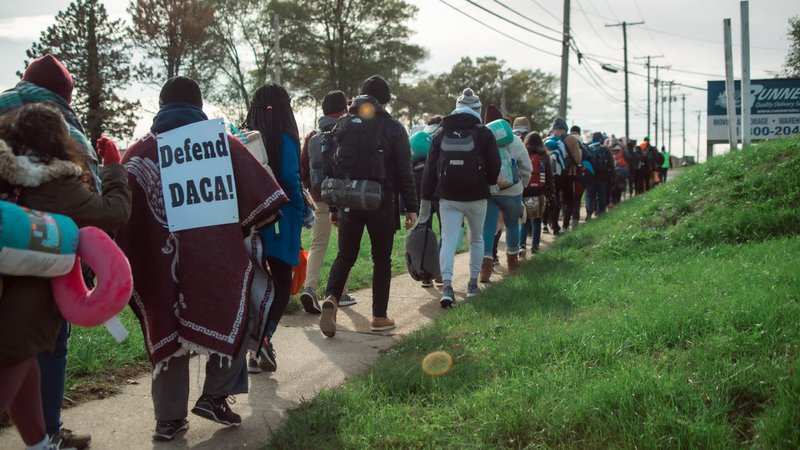 On October 26, immigrant youth and activists embarked on a march from New York City to Washington, D.C., where the Supreme Court heard oral arguments earlier this week determining the fate of the Deferred Action for Childhood Arrivals (DACA) program.

“Home is here,” “Abolish ICE,” “Citizenship for all!” the marchers chanted during their 230-mile trek to the Supreme Court. By the time I joined them at Casa de Maryland last Saturday night toward the tail end of their journey, we were 130 strong—a multigenerational and multiracial group of DACA recipients, allies, and faith leaders who had fed and housed the activists along the way. After walking 10 to 15 miles a day, the marchers were exhausted—but there were moments of sheer joy, especially when water breaks led to salsa dancing on the side of the road.

Amid a fraught political climate, DACA has remained overwhelmingly popular—according to a June 2018 Gallup poll, a large majority of Democrats and Republicans alike support the program, and government reports tout its economic benefits. Its prominence in the media can be attributed primarily to immigrant youth, who have relentlessly demanded legislative solutions for the 11 million undocumented immigrants currently living in the United States.

As someone who prepares DACA applications as part of her day job and has friends and family members who are DACA recipients, I have simultaneously defended and cursed the program. DACA has granted its beneficiaries some semblance of a normal life; at the same time, by elevating stories of young, economically-productive immigrants, it further entrenches the paradigm of the ‘good’ versus ‘bad’ immigrant, thus delineating who is and who is not worthy of citizenship.

The insidious implications of this are nowhere more evident than in the case of Tania Romero, who was arrested in Georgia this past summer for driving without a license. Because she lives in a state where local law enforcement cooperates with ICE, Romero was quickly transferred to a private detention facility, where she now awaits deportation. Her story was widely circulated by news outlets, which honed in on her status as a stage-4 cancer survivor—and her son, a DACA recipient and Yale doctoral student.

While Romero’s son has acknowledged that the circumstances surrounding his mother’s detention and imminent deportation are not unique, media outlets have continued to report on his heroic efforts to “save her,” framing the family’s ordeal as an exemplary immigrant’s one-man struggle to rescue his mother, who devoted her life to ensuring that her son could become such an exemplary immigrant. The irony of this—a tried-and-true immigrant success story undergirded by threat of deportation—is the logical conclusion of immigration law today. We have created a system in which the organizing premise is deportation, not potential membership. DACA prevails on the “innocence” of children—innocence that shields them from the supposed sins of their parents.

An immigrant rights movement that centers individual exceptionalism will never end the carceral immigration system. We require immigrants to be superheroes—to be human is not enough. The punitive legal system will continue to surveil and conduct raids on poorer, darker, unassimilated immigrants, while those deemed deserving are integrated into “citizenship”—upon conditions of exceptionalism and assimilation.

The militarization of the southern border and investment in invasive surveillance technology will undoubtedly continue to harm those fleeing violence, structural instability, and the ever-worsening effects of climate change in their home countries. Advocating for a legislative agenda that presumes deportation to be a necessity—and requires immigrants to have their humanity rubber-stamped year after year without guarantees—only serves to perpetuate a broken and increasingly violent immigration system.

Nevertheless, we continue to advocate for DACA and other temporary work permits because they are the table scraps available to us at this time. Even before the policies of the Trump administration, the U.S. immigration system was barely a system at all—more of an ad hoc patchwork of political goodwill and expediency at the expense of human dignity. Pushes for comprehensive reform have only resulted in programs like DACA: contingencies, more lines to circumscribe the deserving.

We advocate for DACA because a tourniquet is better than a free bleed; it is not, however, a permanent solution. Even if the Supreme Court decides in favor of keeping the DACA program as is—an outcome that, at this point, seems unlikely—we must continue to fight for a total shift in legislative and moral perspective. If home is indeed here, and the opportunity to make a home exists here, then we must fight for all immigrants seeking permanence by paving a way toward citizenship for all.