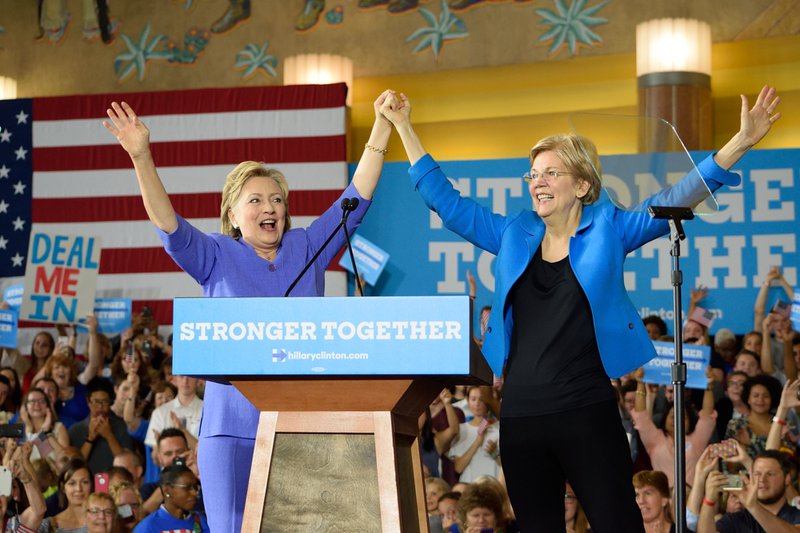 That Hillary Clinton is the target of sexist comments is not news. Nor was it news that she was hit with sexist vitriol over the course of her 2008 campaign. Nor is it news that this election cycle has been mired with highly gendered comments, which seem to substantiate the the claim that women have a harder time in politics than they do in pretty much any other career.

So, too, does the low representation of women in both Houses suggest that politics is a treacherous and inhospitable landscape for women. According to Pew, women, who constitute over half the population of the United States, make up just 20 percent of the Senate and 19 percent of the House of the 114th Congress.

But, despite these abysmal numbers, two political scientists are making a bold argument: Women aren’t underrepresented because the political environment is biased against them (it isn’t), but because they are less likely to seek office. Women can’t get elected if they don’t run.

In their new book: Women on the Run-Gender, Media, and Political Campaigns in a Polarized Era, American University’s Jennifer Lawless and George Washington University’s Danny Hayes confront the widely-shared notion that being a woman in politics means facing sexism, discrimination, and bias, thus rendering running for office an unappealing and particularly cruel experience for them. During a conversation at New America with CNN’s Nia-Malika Henderson, Lawless and Hayes explained that, today, a candidate’s sex plays a minimal, and at times even nonexistent, role in the majority of US elections.

Lawless and Hayes’s conclusion comes from an in-depth study of more than 400,000 campaign ads and 50,000 social media messages from between 2010 and 2014 for U.S. House races. The data indicates that men and women don’t, in fact, run campaigns differently. Moreover, based on analysis of over 10,000 local newspaper articles, male and female candidates get the same type and amount of media coverage.

According to Lawless, “we have reached a point in time whether there is a D or an R in front of a candidate's name tells us way more about what that person will do as a legislator and how a voter will evaluate them than the presence or absence of a Y chromosome in their DNA.”

Challenging the conventional wisdom that women vote differently or that they are above partisanship, Lawless explained that “when it comes to the substantive outcomes that we think are most important to governing, such as voting on bills and the positions candidates take as legislators, there is very little evidence that men and women differ in terms of bipartisanship. Legislators reflect the preferences of their constituents, and male and female legislators do that very similarly.”

Polarization and partisanship are much stronger determinants of vote choice. A candidate’s gender is not only inconsequential, but it also has little to no role in how campaigns are run and how voters perceive them. In their analyses, the authors found “no evidence to suggest that men who run against women behave any differently than men who run against men. It’s party [affiliation] that drives much of the behavior that frames the way that candidates conduct their own campaigns and the issues they choose to prioritize,” said Hayes.

And yes, Clinton faces an incredibly high level of scrutiny. And yes, she is also a regular recipient of sexist comments and coverage. But, as Lawless pointed out, “running for president or being the Vice Presidential nominee on a ticket is a lot different than running for one of the other 500,000 elected offices across the country, where there is far less coverage, people are paying a lot less attention, and the party that you share with the candidate is often the most important factor that you take into account when you evaluate that person.”

Further, there is a difference between specific episodes of sexist behavior highlighted by the media, and systematic gender bias occurrences. Watching the news, one might well believe that political odds are not in a woman’s favor. But they are. And using the media’s treatment of women as the explanation for a lack of parity in representation leaves out the many other barriers that women have to face before they even get their name on the ballot.

One of them is money. Running for election is no small feat, and it requires that an entire campaign apparatus be put together. That ranges from hiring campaign staff and deciding on a campaign message and strategy, to getting the party’s blessing and, perhaps one of the hardest parts, raising enough money to pay for all that. Research shows that “women generally have fewer personal resources than men, and their social and professional networks are less likely to include individuals who give regularly to campaigns. Because women have been underrepresented in elective office, donors, political parties, and political action committees may be more skeptical about women’s electability” (this, despite the reality that women are no less likely to actually be elected).

Another barrier is the so-called “ambition gap” and low levels of recruitment.

Lawless and Richard Fox have conducted research that shows that “among “potential candidates”—lawyers, business leaders, educators, and political activists—women are less likely than men to express interest in a political career.” In fact, “Young women are less likely than young men ever to have considered running for office, to express interest in a candidacy at some point in the future, or to consider elective office a desirable profession.” This lack of ambition (or consideration that elected office could possibly be in one’s future) can also be broken along partisan lines. According to Pew, in the 114th Congress, 74 percent of women in the House were Democrats, while only 26 percent were Republicans; for the Senate, the percentages were 70 and 30 percent, respectively. In other words, while there may not be electoral bias against women, there is a narrative that keeps them from running—and from being asked to run.

This isn’t to say that there aren’t challenges specific to running for office as a woman. As a colleague of mine who used to run campaigns in Arizona told me: “I had a lot of qualms with the boys-club. I was very involved in two of the most progressive districts in Arizona, yet all elected officials were men and I often felt alienated from the culture of poker and basketball nights with the boys. It was a community I was very much a part of but I definitely did not feel like I belonged.” There are many women out there who continue to feel like my colleague did back in Arizona. Politics is more than just running for office, and while a candidate’s sex might play a minimal role during a race, doesn’t necessarily mean women will not face sexism on other areas of political life.

But for Lawless and Hayes, they key takeaway is this: women who are thinking about running for office need to know that the stereotypes are no longer true. Yes, they’ll face all the usual unpleasantries of running for office. But no worse than the men.

It is nevertheless crucial to debunk the idea that if they run, the media and voters alike will be particularly harsh on them. But in order for this argument to be proven outside of this study, women have to run. Organizations such as Emily’s List, She Should Run, and Project Grow work on precisely that message: telling women that they can and should run for office.

Why? Because if more women run, more women win, bringing with them a more legitimate, accountable, and representative democratic process.