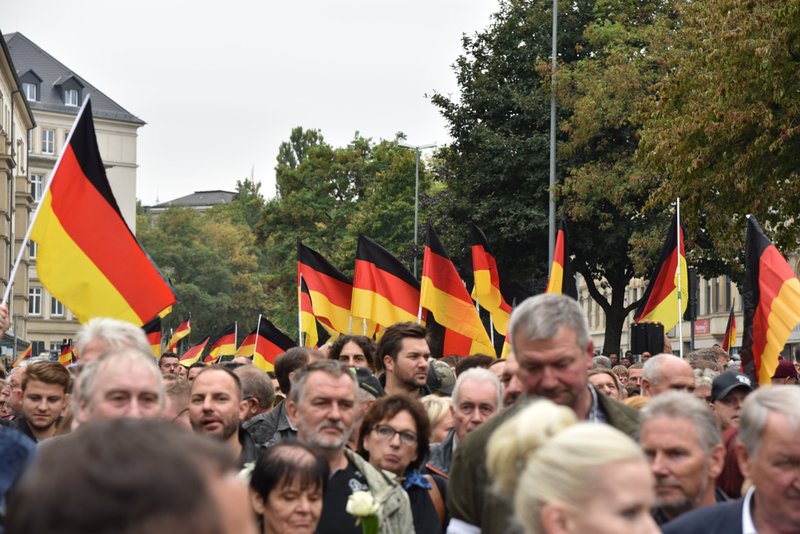 On Sunday, Brandenburg and Saxony, Eastern German states located on the Polish and Czech borders, held state elections. The results were dramatic: The far-right Alternative for Germany party (AfD) is now the second biggest party in these states, pushing aside the moderate establishment parties, the center-right Christian Democratic Union (CDU) and the center-left Social Democrat Party of Germany (SPD), who also form the current federal governing coalition.

The AfD is already the main opposition party in the federal parliament and is present in all sixteen state parliaments. Nationally, the AfD receives 13 percent support, but this rate was even higher in Brandenburg (21 percent) and Saxony (25 percent) last month. Traditionally, the AfD has been much more successful in the East, and Saxony especially has long been a center of far-right activity: Dresden is the home of the anti-Islam PEGIDA movement. Chemnitz was the site of far-right protests and counterprotests that made international headlines in August 2018.

Given these patterns, that the AfD won second place in these elections was no real surprise. Exactly how they did so, however, is noteworthy.

The AfD has always courted controversy, usually based on overt racism and a minimalization of the Holocaust. In this election, they added a historical reference, calling their campaign the “Wende 2.0.” In German history, “Wende” refers to the period of transition that united East and West Germany in 1989. With this campaign, the AfD suggested a redux.

Invoking the Wende on its thirtieth anniversary was a two-part message: First, it told Eastern voters not to trust establishment parties, based on their disappointment in the original West-led reunification and their bitter experiences with the Eastern regime. Second, it promised them a do-over, an Eastern Germany remade in AfD’s image.

This message resonated with voters. If their new power wasn’t enough, on Sunday the AfD achieved something that most political campaigns only dream of: Between both states, they converted 361,000 non-voters, over a quarter million, into supporters (10.3 percent of non-voters in Brandenburg and 14.2 percent in Saxony).

What’s in this short campaign name, then, that could be so effective?

First, the anti-establishment message is a reference to East Germany’s disappointment with reunification. The economy of the Eastern German Democratic Republic (GDR) had always lagged behind the more prosperous west. In 1990, federal chancellor Helmut Kohl promised that through reunification, Easterners would finally share in the Western post-war “economic miracle.” Over the last thirty years, the federal government has invested two trillion euros into Eastern Germany. Each year, they monitor and report on the status of reunification. The Federal Ministry for Economic Affairs and Energy even has a designated commissioner for Eastern Germany.

Despite this, the “new states” are still not yet economically equal to Western ones. While the East is much stronger economically than before, pensions and salaries are lower compared to the West. Only 7 percent of Germany’s 500 largest companies are located in the East, meaning most young, educated people move away for better opportunities. Easterners will face 20,000-22,000 job cuts in the transition away from coal, with parts of the region still set up around the industry. Thanks to problems like these, many Eastern Germans feel like the Federal Republic never delivered its Wende promises.

Today, one in three Eastern Germans describes themselves as “second-class citizens.” And AfD voters in Brandenburg and Saxony are even more likely to agree, at 77 and 78 percent respectively.

This change in the relationship between Easterners and their federal government may also have to do with a shift in service delivery. In speaking to the Financial Times, Mathias Hoehn, a Left party member of parliament and spokesman on eastern German affairs, argued that in the original Wende, the state suddenly no longer provided the expensive welfare Eastern Germans expected. To him, people now feel “they have little to expect from the state, and that they have been left alone.”

For some, the 2015 migrant crisis amplified this pre-existing frustration with the Federal Republic, causing many Easterners to incorrectly worry that the government was spending more on refugees than on them.

Given this history, it’s not surprising that East Germans are less likely to trust current political institutions. In fact, Brandenburg and Saxony have the lowest levels of satisfaction with democracy, at only 40 percent. This fits in well with the AfD’s anti-establishment ethos, which already pushes against the federal government and establishment parties like the CDU and SPD.

But the AfD takes this existing tension and uses it like propane; their Wende 2.0 campaign directly compared the current German government to the former Eastern German dictatorship, telling voters to take a stand against this oppressive regime, just like in 1989.

Today, the AfD claims that political correctness is akin to the group-think enforced by the Stasi — a secret police force that conducted mass domestic surveillance, executed defecting officials, and arrested political opponents of the ruling party. The GDR also created an environment of wide-spread, civilian “unofficial informants:” friends, neighbors, classmates, and co-workers who reported “incriminating information” about each other, which could be an offense as small as wearing “Western clothes.”

By any reasonable measure, this is an inappropriate comparison. What perhaps best summarizes this argument’s irony is an encounter between Merkel and an Eastern voter last month who accused her of being a dictator, saying AfD members had no freedom of political opinion. Merkel, who grew up in the GDR, calmly noted that he could ask this question at a public event without fear for his safety. Regardless of accuracy and controversy, however, AfD voters clearly connected with similar arguments like his.

Ultimately, the core message from the AfD is that Easterners have been “betrayed by the Federal Republic,” according to Berlin-based journalist Paul Hockenos. So, the AfD now proposes to finally deliver the long-awaited Wende, not by 1989 standards, but by its own far-right definition.

Many of the Easterners’ frustrations are based on economics, and how the original gulf between the two countries remains. Today’s surge in far-right support is not only about economic fears, though. It’s true that AfD voters are more pessimistic about the future and are more likely than other Eastern voters to feel like they have fewer career opportunities. However, another study found supporters of The Left, the former Communist party, are actually more likely to worry about globalization and are just as dissatisfied with democracy. Instead, AfD supporters may be largely voting on strong anti-immigrant positions.

Sure, Wende 2.0 called for “equal pensions and wages” and “good education for all.” But it also promised to “deal with rejected asylum seekers and criminal aliens” to create “child and family friendly” states, a campaign-platform version of the AfD’s usually vehemently anti-migrant rhetoric. And this reflects AfD voters’ biggest concerns: 34 percent in Saxony and 30 percent in Brandenburg said immigration was the biggest factor in their voting decision. In Saxony, only 5, 2, and 2 percent of Left, CDU, and SPD supporters said the same.

For whatever combination of voter priorities, the fact that the AfD mobilized such a huge number of nonvoters suggests that their message was a powerful one, regardless of how controversial. These newly mobilized voters actually represented the largest portion of this year’s support for the AfD: 38.7 percent of supporters in Brandenburg and 41.3 percent in Saxony were non-voters in the 2014 election. Based on these numbers, the AfD is only gaining support, not dying down. The dramatic jump in their election results proves this, too: their support increased by 11.3 and 17.8 percentage points in Brandenburg (from 12.2 to 23.5 percent) and Saxony (from 9.7 to 27.5 percent). Put simply, the problem of the AfD is here to stay.

The Brandenburg and Sachsen state elections aren’t the first time that the AfD has used the lingering divisions between the East and West as fuel for their own party’s platform. The directness and scale of this Wende 2.0 campaign, however, may mark an interesting shift in the AfD’s strategies. While it is a specifically geographic-tailored approach, it’s also a more generalized one that may suggest the party is trying to reach a broader audience—a tactic they could replicate in other regions. Voters who disagree with the kind of blatant attacks on immigration for previous AfD campaigns may actually agree that reunification is the ultimate problem—despite the outcry around this misappropriation of history. And even if that means being open to xenophobia as a solution.

If there’s only one takeaway from this weekend’s election, it’s this: The AfD is bombastic, but perhaps becoming more politically savvy. The AfD didn’t outdo the establishment parties last weekend, but given these recent numbers, it may be a matter of time.