At the Crossroads of Intersectional Feminism 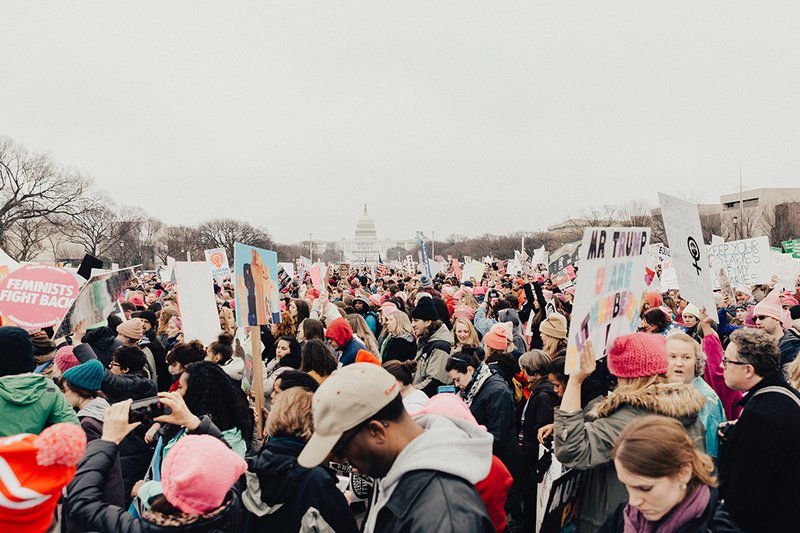 Whenever the newest term catches on, suddenly everyone wants to puff out their chest to flaunt their buttons—“Nasty Woman”—or slap stickers on their computers—“Ask Me About My Feminist Agenda.” Since November’s surprise election, “intersectional feminism” has been one of those terms. But the term, it should come to the surprise of no one, is much more than that. And living under the Trump administration has brought many people to this realization, and opened their eyes to the discrimination and inequality taking place across American society.

Yet these are by no means new revelations. Rather, the recent attacks on immigration, reproductive justice, and health care have simply made it crystal clear, for the previously uninitiated, just how dangerous it is not to address the intersectionality of the issues at hand, and how they affect different groups in different ways. When Charnesia Corley was searched and allegedly raped by police officers, for instance, the silence from social justice organizations demonstrated a failure to use intersectional feminism when it was most needed.

So first things first: What is intersectional feminism?

In 1989, Kimberle Crenshaw coined the term via her critique of feminist theory and antiracist politics. Through a lens of black women’s lived experiences, Crenshaw identifies the tendency of feminist theory to view discrimination as a single-axis framework—one that, in other words, conditions us to think about disadvantage playing out as a single identity. The hitch, however, is that everyone isn’t similarly situated, which the single-axis framework doesn’t see. Imagine you’re standing at a crossroads between the streets named Race, Gender, Class, and Religion, with cars coming simultaneously from every direction. Which one do you dodge, which one do you stand in the way of? Zeroing in on the most privileged members of a group obscures the experiences of those who are, as Crenshaw sees it, standing at these busy intersections.

Yet in order to understand what intersection feminism is, we must, too, discuss what it isn’t. For one, intersectional feminism isn’t a buzzword—it’s a process, not a term. As expressed by Loretta Ross, intersectional feminism isn’t for people finally acknowledging white supremacy, and it shouldn’t be used to brag about one’s perceived degree of socio-political awareness (or “woke-ness,” in the vernacular). Ross recently shone a light on these misunderstandings. As Crenshaw’s theory caught on, she told us, people applied it only to women of color. And since its use has become more popularized, “a common misconception is that all intersectional identities mean the same thing and offer comparable threat levels,” she added. When people apply the term to their identities, Ross warned that they overlook the power differentials of their oppressions.

Take the wage gap. Looking at it one-dimensionally glosses over pay discrepancies that women of color face. Black women earn 64 cents to every one white male dollar. Even worse, Hispanic women earn 55 cents to every one white male dollar. Identifying as Hispanic and a woman in the U.S. workforce essentially diminishes one’s worth by 45 cents. A white woman is penalized by gender, but she has the advantage of race. A Hispanic woman, however, is penalized by both race and gender. And a gay black woman is penalized by race, sexual orientation, and gender. These identities aren’t mutually exclusive, yet when society fails to see that fact, we move backward, only stretching the distancing of some from reaching an equal playing field.

Intersectional feminism, by contrast, is a lens through which we can see multiple forms of discrimination, as well as advantage. As Crenshaw sees it, the way in which people engage with discrimination is different, and more challenging, for people who are subject to multiple forms of exclusion. The United States has the highest maternal mortality rate among developed countries. But while this is certainly alarming from a national perspective, try being a pregnant black woman in Texas, where the rate of maternal mortality is four times higher for black women versus white women. Without recognizing this disparity, we fail to protect black mothers lives.

Moreover, intersectional feminism is a tool that advocates can use for cross-movement building, coalition formation to fight all forms of injustice. Understanding where, how, and why progressive movements overlap is critical to each movement’s individual success. For example, the strongest advocates understand how the fight for reproductive justice goes hand in hand with the fight to end police brutality. The agenda of the reproductive justice movement “rings hollow” in the face of racist systems of violence and control. Reproductive justice is about individuals having ultimate control over their body—and their future. Choices, then, aren’t made freely if they’re overshadowed by fear or restrictions stitched into broader social structures.

The Black Lives Matter movement gets at this very point. It’s an intersectional movement created by a shared vision of a world that ceases rampant, institutional violence against black bodies. The movement is rooted in lifting up the voices of all stripes of black people—including queer, trans, disabled, undocumented, and others marginalized within the broader ideal of black liberation. It is, at its very core, an inclusive movement. Yet the pushback against Black Lives Matter—including, most obviously, All Lives Matter—has been fierce. Counter reactions like this aren’t new. Crenshaw points out how some of the victories of the Civil Rights Movement, such as Brown v. Board of Education, were later turned on their head, such as the twisting of the case into a line of thinking that it’s discriminatory to take race into consideration at all in school assignment. Of course, the aim of these racial justice movements isn’t to obscure other identities; it’s to pull into focus those on the fringes. That shouldn’t be a controversial aspiration.

Everyone has multiple, crosshatching  identities. Looking ahead, especially in a world already mired in social turmoil, recognizing this basic fact will be crucial to building a broader front—one that can take down challenges as varied as the people who have to face them.