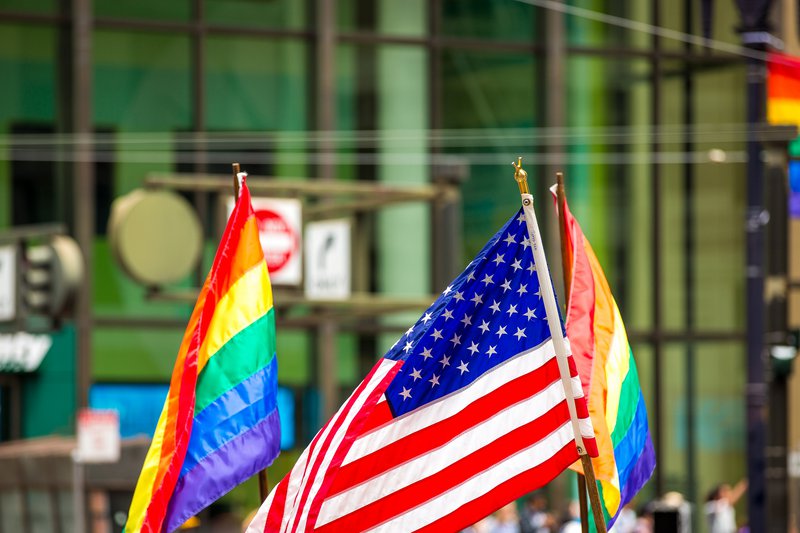 Imagine you’re a ninth grade student in a public high school. Everyone you know is straight and you’re not. There are no resources at school for you. The school doesn’t care about your identity. Imagine further that you go to school every day to learn only about people who do not share your identity. Nothing in the history of America depicts the life you’re living. No one who has faced the same challenges you face has made a valuable contribution to history.

Students across the country experience this very scenario every day, putting them at a disadvantage relative to their peers. To create equitable opportunity for all students, schools should provide all students with the tools to succeed. Paramount to student success is engagement. And to be engaged, students should see themselves reflected in the material they’re studying. Prior to this year, very few public schools taught students about LGBTQ identities, civil rights, or the contributions of LGBTQ people to U.S. history. Indeed, until recently, teachers were neither required to teach this content nor legally protected if they did.

That changed for some on July 14, 2016, when the California State Board of Education voted unanimously to update the History-Social Science (HSS) Framework, a document that guides education leaders in choosing how and what to teach. The framework will now include “the contributions of [LGBTQ] Americans and people with disabilities to the history of California and the United States.” This requirement makes California the first U.S. state to formally acknowledge the historical contributions of LGBTQ people—and to require teachers to portray them in a positive light.

Updates to the framework will change curricula starting in second grade, where lessons on different family structures will now include those with same-sex parents and children. The fourth grade curriculum will introduce students to Harvey Milk and other civil rights activists, an ongoing lesson that will culminate in eleventh grade U.S. history, which now includes the fight leading up to marriage equality.

It’s no coincidence that this framework passed in California and not elsewhere. Prior to July 2016, the state’s education policy landscape as it specifically pertained to LGBTQ students was already one of the most progressive in the country, positioning it to adopt this equitable curriculum. The new guidelines will put into use the requirements of a piece of legislation known as the FAIR Education Act, or SB 48, which passed in 2011. The state’s open framework process, which also paved the way for FAIR, created opportunity for advocacy groups and civil rights organizations to garner support for the new legislation. While both the FAIR Act and the new framework faced setbacks at the state level, neither were delayed due to lack of public support.

A coalition of advocacy organizations also helped pave the way for the more inclusive framework, working with the Committee on LGBT History (CLGBTH) to advise the State Department of Education on the how to frame LGBTQ people in textbooks in a way that complies with SB 48. Coupled with support from the state’s two teacher unions, these factors created a ready state and a unique opportunity for the Framework to take hold.

Aside from favorable processes, California has enumerated anti-bullying laws, which protect students from bullying on the bases of gender, gender identity, gender expression, and sexual orientation. Every school district is required to adopt an enumerated policy, which not only protects students, but sends a message to those protected students that the school values their identities.

In this regard, California stands in stark contrast to the national landscape. According to the Gay, Lesbian, and Straight Education Network, eight states still have ‘No Promo Homo’ laws, which “expressly forbid teachers from discussing gay and transgender issues (including sexual health and HIV/AIDS awareness) in a positive light, if at all.” Many more states have anti-discrimination laws but they do not explicitly protect LGBTQ students. No other states have an LGBTQ-inclusive history-social science curriculum.

Given that California is largely on its own, it’s worth examining how it brought this framework into being. The process, starting with the FAIR Education Act, has been a ten year effort, says Renata Moreira, Interim Executive Director of Our Family Coalition (OFC). In 2006 the state legislature passed the Fair, Accurate, Inclusive, and Respectful Act. That act was an update to the state education code, requiring that contributions of LGBTQ people and people with disabilities be added to the list of other underrepresented racial and cultural groups whose contributions were already included in HSS lessons. It was, simply put, a request not to be excluded.

Then-governor Arnold Schwarzenegger promptly vetoed FAIR. Over the next four years, a coalition of state-based advocacy groups formed and worked to ensure that the law would not be dropped. Public opinion research and a popular referendum effort kept the bill from disappearing from the eyes of Congress, and it was ultimately signed into law in 2011 by Governor Jerry Brown, though a budget moratorium initially delayed its implementation.

A repeal effort led by religious rights organization Pacific Justice Institute further complicated things, but it failed to get even a fraction of the signatures required to overturn SB 48. Meanwhile, the framework received overwhelming public support, which Moreira attributes largely to the work of OFC and other state advocacy organizations. There is however, now a potential threat at the federal level to implementation. Facing an administration helmed by Mike Pence, a prominent voice for regressive social policy, state leaders may face higher level pushback. But advocates for the framework stress that there would be no factual basis for pushback, however, because there is no subjective conflict between the content and religion or conservatism. Teaching about LGBTQ people and their identities is teaching about lived realities, says Rick Zbur, executive director of Equality California. Providing students with a complete understanding of American history and the factors that contribute to the social reality of the 21st century does not force students who have conflicting beliefs to accept these identities. While advocates do hope that education will lead to greater understanding, mentioning does not entail promotion.

Since the final iteration of the Framework was approved earlier this year, the coalition, now including historians from around the country, has begun meeting with publishers to rewrite textbooks. At same time, says Moreira, the Department is inviting scholars, academics, and educators to become reviewers of the curriculum that they are developing to ensure accuracy and SB 48 compliance. Ten years ago, the idea of the FAIR Act had insufficient government support and little public attention. Today, an inclusive Framework is backed by the support of the Department, informed by the expertise of LGBTQ education policy leaders, and is overwhelmingly supported by the public.

The framework process was, in many ways, reflective of the larger fight for equality, and its importance cannot be overstated. Simply put, students who do not have the opportunity to see themselves reflected in the material are at a disadvantage, no matter their identity. If they do not have role models who were leaders, who made a difference or contributed to the history of the country, they are far less likely to believe they themselves can be or do those things. Research shows that an inclusive curriculum contributes to a safer environment for all students, helps them feel connected to their school, and fosters acceptance among peers. The new framework considers each of these goals a school-level strategy for achieving equity.

Don Romesburg, Chair of Women’s and Gender Studies at Sonoma State University and Co-Chair of the CLGBTH, highlights the Framework’s focus on intersectional identities as an important victory. “I’m very proud of the presence of diverse material,” he says, “and the inclusion of LGBTQ identities outside of wealthy, white gay men is very important.” This diverse material includes coverage of Native-American Two Spirit and the imposition of gender norms by European settlers on Native tribes; sexual and gender identities born out of the Harlem Renaissance; and the roles of gender and sexuality in the practice and struggles of slavery and emancipation.

“You can’t build a community without looking at the whole student experience,” Joey Hernández, Education Policy and Programs Manager at the Los Angeles LGBT Center says, “and a big part of that is teaching and learning. When students can’t see themselves in lessons, there is a systemic inequity maintaining a lack of achievement.” The whole student experience, in many cases, includes enduring the tangible effects of systemic racism, sexism, and anti-Semitism. If students are taught only about straight white, Christian men, then straight, white, Christian men become the norm. Students believe these identities are normal and everything is marked. To be a straight, white, Christian male is natural and preferred and everything else is not.

A curriculum that supports these ideas, even inadvertently, teaches students to conceptualize the American dream through a hegemonic lens without providing them the language to realize it. Furthermore, minority students are taught they can only deviate from this model in the one facet of their identity that is least offensive. If they’re gay, they must be wealthy, flamboyant and male. If they’re black, they must be wealthy, Christian and male. This teaching, which is imposed on students from a young age, says that a person cannot be both: both LGBTQ and black, both LGBTQ and poor, both LGBTQ and female. This type of thinking makes the LGBTQ community and communities of other racial and cultural groups mutually exclusive. LGBTQ students of color and of non-christian religions who are missing the communities they need to thrive in school are then also excluded from these communities outside school.

Without an inclusive curriculum, non-LGBTQ students are deprived of the chance to learn about their peers outside of stereotypes and stigma. They are deprived of the chance to understand how personal bias becomes social movements and how social movements become history. They are less likely to draw connections between themselves and their LGBTQ peers, and more likely to maintain a system that excludes LGBTQ voices. Including the fight for LGBTQ equality in a curriculum that teaches a broad range of civil rights is a conscious choice to advance educational equity for all students.

Now imagine again that you’re that ninth grade student, but now you’re in a club at school where you can talk about issues you care about. A club of people who also have multiple identities and are interested in knowing you because of yours. You’re beginning to grapple with how and where you exist in the world and there are people at school to help you. In class, you learn about civil rights champions who, like you, fought to be understood. You see that these people fought long and hard for you to be able to learn about them today. You understand that your school values LGBTQ identities, histories, people, and you.