The Costs of Care 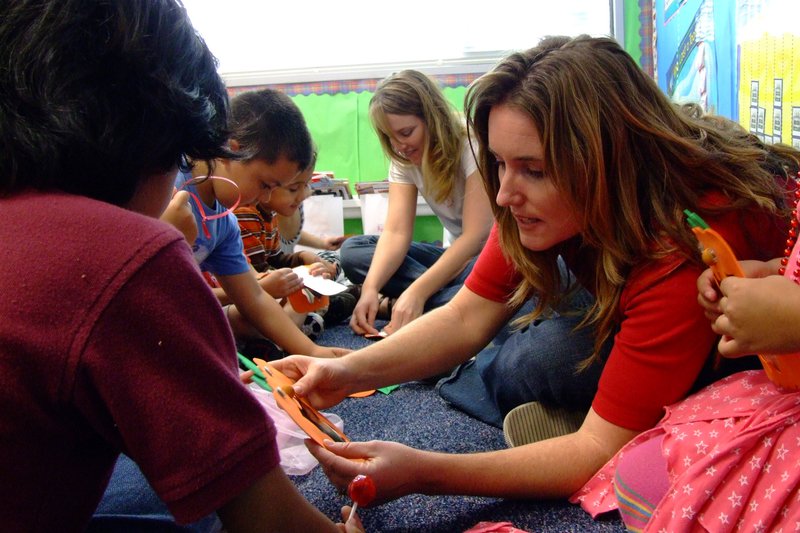 Meredith Sawyer is an early childhood educator in Greensboro, North Carolina who has been  teaching for more than a decade.

But as she reflects on the last seven years as a transitional kindergarten teacher in a child care center that has the highest quality rating the state can offer—five-stars—Sawyer realizes she’s grown tired of watching her peers meet life goals while she’s left unrewarded for her accomplishments and hard work. In a word? Sawyer is stuck.

“I wait tables part time so I don’t have to live paycheck to paycheck,” said Sawyer. “And the fact that I still have to do this at 31 is like a slap in the face.”

With an early childhood educator’s teaching license and a bachelor’s degree in human development and family studies, Sawyer holds credentials that should provide the foundation for a good living. But educators who care for and teach young children are struggling as they work in an industry that places high expectations on their shoulders, while providing poverty-level wages. We increasingly recognize how critical high quality care and learning are during child’s first five years. But those who graduate from college with an early childhood education degree have the dubious distinction of entering one of the lowest paying fields for professionals.

Across the nation, the state of early childhood care and education fares poorly in three key areas, according to a recent report released by the New America: affordable cost, high quality, and easy availability.

Even in Massachusetts, one of the states rated highest by the report’s authors, early childhood educators there are paid so poorly that many qualify for public assistance like food stamps and Medicaid. Turnover is high, some have left to earn more in retail or the restaurant industry, and statewide efforts to raise those educators’ salaries have resulted in very little improvement.

In North Carolina, the median hourly wage for early childhood educators in 2015 was $10.97 an hour, a figure that has grown a paltry 3.8 percent over the 2011 median wage, according to a workforce study by North Carolina’s Child Care Services Association.[1] Less than half of all child care centers provided some help with health insurance in 2015, and the workforce study suggests that figure is on the decline.

Today, forty-two percent of North Carolina’s child care educators and their families must participate in government assistance programs such as Medicaid or SNAP (food stamps).[2] “We can no longer offer a health insurance plan to our employees,” said Anna Mercer-McLean, who is the executive director of the Community School for People Under Six in Carrboro, N.C. “Our costs have just gotten so high. So instead, we offer them $150 per month to use toward Obamacare. And several of our employees qualify for Medicaid.”

Those efforts play out against a background of changing expectations for early childhood educators. Recent research demonstrates that children experience rapid brain development from birth to age 8, placing early childhood education at the foundation of all future learning and achievement.[3] Now that the majority of early childhood educators have at least an associate’s degree, says Michele Rivest, executive director of the North Carolina Child Care Coalition, the state should recognize them as professionals by increasing standards that reflect the required professional knowledge needed to foster young children’s development and learning.

But if as we increase expectations for educational attainment, wages should also rise correspondingly. Currently North Carolina offers educators an education-based supplemental salary program called WAGE$, but that program is only offered in roughly half of all of North Carolina’s counties. In 2015, only 14 percent of the early educator workforce received salary supplements from WAGE$.

“We believe the state needs to put together a statewide salary supplement program for teachers who have degrees,” said Rivest. It’s a proposal her coalition plans to push during the 2017 legislative session and it would piggyback on the current WAGE$ salary supplement program, effectively expanding it to all teachers employed at highly-rated childcare centers who have at least an associate’s degree in early childhood education and meet income and employment eligibility requirements.

For educators like Sawyer, the professionalization of her industry can’t come fast enough.

“The educational standards are just not high enough for teachers,” says Sawyer. “And with wages in the $10 and $11 an hour range, who is going to go into debt to get a degree?”

For the families shouldering the lion’s share of educational costs, it often comes as a shock to learn that early childhood educators are earning poverty level wages.

That’s because high quality early childhood care and education in North Carolina—and across the nation—has become a significant financial burden for families. Today the average cost of full-time care in child care centers in the United States is $9,589 per year, according to the New America Care Report,[4] and that figure now outpaces the average cost of in-state college tuition [$9,410] in North Carolina and several other states.

“The costs are so high because we’re talking about an industry that is largely built on a private market system,” Rivest said. “Parents pay the vast majority of costs associated with early childhood care and education, and that is currently the cultural and political norm.”

And those costs, says Rivest, are so high for parents because child care and early education is labor intensive. The required ratios of children to teachers are typically quite low, even when compared to kindergartens: For infants, it’s 1:4, for Pre-K it is 1:18, with a teacher assistant. It’s this, along with the maintenance of costly specialized facilities designed for young children, that drives costs.

But even with the hefty fees parents are are already paying for the cost of care, child care centers must leverage funds from more sources. As in other states, child care centers in North Carolina rely heavily on a patchwork of state and federal funds, including child care subsidies, N.C. Pre-K, and federal Head Start programs, along with the nationally recognized Smart Start program,  a public/private partnership that supports families of children ages birth through five years.

While child care subsidies are a huge help to families that would otherwise not be able to take advantage of high quality care, advocates say the subsidy market rates fall well below the true cost of services, and that not all students who are eligible actually receive them.

“The state only reimburses child care programs at a state-determined level that is based on a market rate analysis,” said Rivest. The problem with this analysis is that it doesn’t take into account what experienced early childhood educators should truly be earning, nor does it take a deeper look into other costs associated with such services. And the New America Care Report noted that many states use market rates that are outdated—in some cases, by as much as 10 years.

Centers tend to charge lower rates than the true cost of services because there’s a limit to what parents can pay. But that behavior also distorts these market rate analyses, so the state is incentivized to perpetually underfund child care subsidies. And that has a huge impact on families and providers.

Community School for People Under Six, a child care facility in Carrboro, N.C. devoted to serving low-income families, charges $1,490 per month for infant care, but the child care subsidy only covers $1,080. In many cases, families can’t really make up the gap between what the center charges and the subsidy, so the center scrambles to find ways to make up the difference, either through grants, local scholarships or a surplus of funds—when that does happen. And the $1,490 infant rate isn’t really the true cost of services.

Even with the poverty wages they pay teachers, most providers don’t charge enough to cover their true costs and operate on paper thin margins, the New America Care Report showed. “We should be charging $1,600,” said Mercer-McLean—whose school nevertheless aims to pay teachers as best it can.

Because infant care is the most expensive service to offer—and because families often have difficulty paying for it—child care centers will often trim infant slots in order to make their budgets work. Some centers also limit the number of low-income families they accept, which drives families to either lower quality care that is more affordable or into the unreliable and sometimes dangerous gray market—all of which only contributes to inequality. Research has shown that high school academic achievement gaps between rich and poor students are already in place by the first day of kindergarten.

In North Carolina, those waiting for subsidies number in the tens of thousands. There are also not enough slots available for low-income families that want and need to get their children into the state-funded Pre-K program, either.

Indeed, it’s becoming clear a child care crisis is befalling not just North Carolina, but the entire nation: In the majority of American families with children under 18, all parents work for pay outside the home, according to New America’s Care Report—which means on any given day, 12 million children need access to care and a high quality education. But the resources just aren’t in place to support those numbers—and the Care Index has found that the early learning and care system isn’t working well for anyone.

That certainly is clear to Sheila Arias, a single mother of two living in Durham, N.C.

Arias’ daughter, Jaslene (age 8), has special needs, which has made it difficult for Arias to be employed full time while managing her daughter’s care. She also has a four-year-old son, Enoch, for whom she also wants—and needs—early learning and care, both for Enoch’s future, and so that she herself can participate in the workforce and provide for both of her children.

It has been difficult.

Both of her children have been able to participate in the federally funded Head Start program at one point in time or another, when she was working. But Arias repeatedly ran into the same problem—the math never seemed to quite work. If she earned too much, the state cut her subsidy and she couldn’t cover the cost of child care and pay her bills. So debts would pile up, forcing her to drop out of the workforce at times and seek out more informal childcare arrangements in private homes.

The tenuous nature of it all rocked Arias. “At times it made me feel like a failure,” she said. “I was so worried for my daughter, given her developmental delays.”

Arias continues to work toward an associate’s degree in psychology and hopes to eventually help families who have children with special needs.

“We just need to have better systems for parents,” said Arias. “Not just for single parents, but all parents if we want them to be successful.”